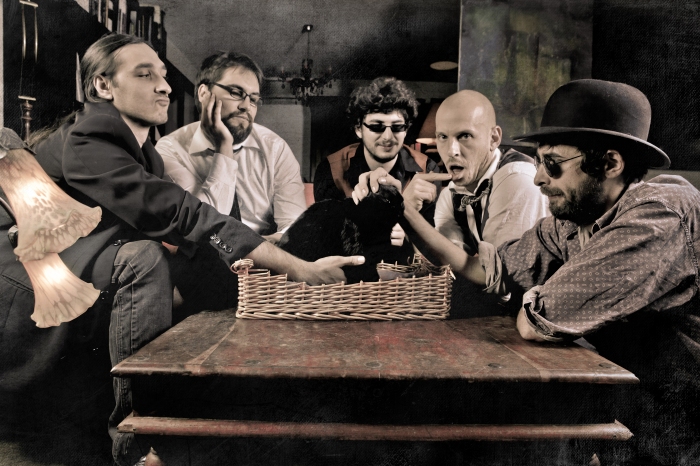 Deliciously insane, that is all you need to know to be inspired to check out easily one of the most magnificent triumphs of the year. Hyperblast Super Collider from French avant-garde metallers Pryapisme, and I use that term loosely as truly who knows what to call their sound, Pryapisme is pure maniacal genius. It is a raging adventure which ignites every possible target from ear to heart as it heads straight for the soul with at times bewildering, often disorientating, and uncontrollably fascinating brilliance.

Hailing from Clermont-Ferrand, formed in 2000, and consisting of Nicolas Sénac (guitar, synths), Benjamin Bardiaux (keyboards), Goulwen Brager (bass, percussions, sax), Nils Cheville (guitar), and Stagnant Waters member Aymeric Thomas (drums, clarinet, machines) is about all that can be told about the band but then again it is all about the music which paints a thousand soundscapes, scenarios, and intrigues. Released via Apathia Records, Hyperblast Super Collider is the third release from the band, following Rococo Holocaust of 2010 and Tournoi des Legendes OST of earlier this year which was if I have put the clues together right the soundtrack to a NESBLOG documentary about 2012 EVO Super Street Fighter 2 Turbo Championship. Being new to the band I can only surmise their earlier releases are as frenetically inventive and schizophrenic as their new album but taking the evidence of Hyperblast Super Collider as bait they will be dived into soon enough to find out. 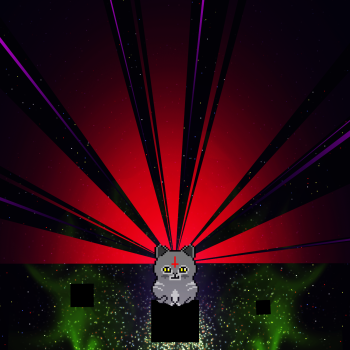 is going on and the intent of the band, instead just let it invade and parade its scintillating tempest of invention and diversity. That will organically bring bedlamic paintings and nightmarish treats to life in thoughts and imagination, each individual to every person and different on every excursion for the individual. Listening to opening track Un druide est giboyeux lorsqu’il se prend pour un neutrino alone you certainly raise an eyebrow to ask whether the band itself is fully in control of things and their direction such the expanse of sound and flavours rampaging around the psyche. The positive answer is soon given such the craft and unbridled organic innovativeness flowing through the song. Pumping urges and beats assault the ear first before joining up with a Dog Fashion Disco like romp of energy and psychotic mystique. It is an instantly addictive beckon which brews up a constantly shifting presence from fury clad intensity to sympathetic classically toned elegance and back again, but each side step and drop of the shoulder to swerve from expectations unique to all before. The track seduces and piles upon the senses from its eventful start through to the thrilling end, dragging the listener into a blaze of manic imagery within the senses exhausting crazed dance, though the only dancefloor able to cope with this track is one littered with reality challenged meshugahs.

The following Boudin blanc et blanc boudin tempts with a less imposing but equally energetic waltz of electronic and creative unhinging, the song quick stepping across the ear with the feet of a drug addled rodent, its touch light and skittish but constantly a blur of movement and voraciousness. Again there is a dementia to the imagination employed sending the passions on a cascade through a blistering fevered flame of invention building to a finale which would suit any Broadway show…if created and presented by the residents of an asylum.

Through the scratchy Nintendo start of Random Jean Vigo and into its warped gypsy punk tease and subsequent haunted nursery room shadows and disconnected but affiliated clockwork movements building into an life intimidating predation pleasure soars whilst its successor La notion de chiralité de spin et d’oscillation de saveur des particules supersymetriques definissant un champs scalaire lors d’une transition de conifold en cosmologie branaire dans un modele ekpyrotique, the song a mouthful within any jaw, just bring more potency and depth to the rapture already spewing forth for the magnificent lunacy. The second of the two plunders thoughts and hearts with an exotic eastern/ oriental swagger to its invigorating and again mysteriously contagious ride, the sax of Brager a sirenesque temptress in league with just as wanton and skilful bewitching from guitar, rhythms, and every element you could imagine from a riotously infused feast of brilliance. There is childlike quality to the tracks which calls out, not in their composition or presentation but in the ability to let the imagination and invention go wild but keep it within a cage of understanding and infection fuelled logic, even if it is a wacked logic.

The pair are soon out shone by Lesbian bordello, the piece a certifiable stomp of irresistible sultriness and again salacious wantonness with a dance impossible to refuse. There is a definite Cardiacs meets Gogol Bordello wind blowing through the boisterous schizoid treat and though debatably the song is the easiest to access and most straightforward on the album it still overflows with synapse fusing invention whilst pushing deeper the eclectic sound and feel of album and sound. The same applies to the brilliant J’ai envie de te claque, the track a walk through the shadows of night with noir lit atmospheric corners screaming out their insanity and unique worlds through evocative keys and beautifully taunting vision painting strings from guitar and bass.

The mesmeric rifling of the mind that is Cochenille, membrane et volcanology with its aberrant croon and narrative firing up crescendos of creative frenzy enslaves the passions again with impossible ease, whilst the Nintendo-esque delirium of Jon-bon-jon-boutros-boutros-boutros-bovi-miou-miou and the dramatic Je suis venu, j’ai vu, j’ai sangouinu, which sounds like it should be the sociopathic inspired theme to a sixties spy/private detective show or film, ensures there are no doubts to lay against the declaration that this is one of the major highlights of the year and should be stamped with classic in deeply entrenched letters.

Closing with La nuit sur le mont-chauvelu an exceptional interpretation of a piece by Russian composer Mussorgsky, Hyperblast Super Collider is a sonic berserker of pure genius and incredibly detailed and fluid invention. Seriously challenging for album of 2013 Pryapisme is quite simply our new aural lust, a cuckoo in the nest of existing greatness but one of beauty and non compos mentis splendour.