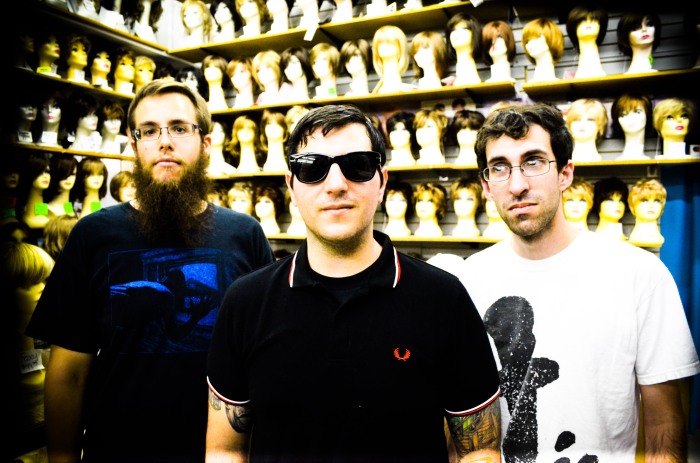 There can be a beauty bred when caustic noise and sonic abrasion walk hand in hand but when in the hands of a band like Psychic Teens, where gothic shadows, post punk invention, and shoegaze seduction are also employed, it is a mesmeric tempest that just steals the passions. Hailing from Philadelphia, the three piece band took no time in drawing hungry responses and  support after forming in 2010, their debut album Teens of the following year garnering widespread critical acclaim. Following it with a split CD-R of cover songs with Hulk Smash and a digital EP of Misfits cover songs, as well as impressive live performances, including shows with bands such as The Dead Milkmen, Zola Jesus, Titus Andronicus, Ceremony, True Widow, METZ and many more, Psychic Teens has earned a strong reputation and fanbase but one suggests it is only a scratch which once new album Come lays down its irresistible lures and traps, will open up to full lustful wounds.

The new release takes the qualities of that first album into a new realm of imagination and niggling enterprise, its body a contagious caustic wash spawned from the post punk evocation of Joy Division with the noise rock essences of Part Chimp and the gothic dark passions of Birthday Party. There is much more to it than that though as opener NO soon confirms. The track instantly captures the imagination with a rhythmic dealing that shuffles the senses into a compelling cage. Joined by the prowling bass and sabre flashes of guitar, the song only grips tighter drawing a willing submission as the excellent vocals of guitarist Larry Ragone join the sonic affray. Sounding like Nick Cave meets Ian Curtis is tones add depth and expression to an already riveting stretch of imagination, with the bass grooved romp and sizzling guitar flames delicious enticement within a song that teases like a mix of The Pixies and Pere Ubu. It is a passion stealer of a song and start giving the rest of the album a lofty bar to emulate.

Not that the rest of the album struggles for the main, the following tantalising heat of RIP with its striding rhythms, scurrying riffs, and

intensive fire of sonic intrigue and mystique, another virulent call on thoughts and emotion. Throughout the strings of Ragone tease and tempt within the heady hooks and lures of bassist Joe DeCarolisa and drummer Dave Cherasaro, all combining to infect the senses and passions with a thrilling toxicity, soon matched by the potent sweltering charms of H#TE and LUST. The first of the two worries melodic intervention and harmonic persuasion into breeding an acidic haze of bristling energy and punkish provocation whilst its successor emerges from a striking suggestion of intimidation through fine guitar rubs to enslave with sinister vocals and resonating noir clad mystery crafted by the combined inventive shadows of the band’s imagination.

The abrasive LORD lays down a softening expanse of reserved yet sure cold rabidity next before making way for the best song on the release, its title track. The song again makes its entrance on a shuffle of firm and addiction causing rhythms before opening its arms to a fire of surf rock heat and emotive enticement. A song Joy Division would have wished they had composed in their time, it is a sensational sultry suasion on the soul, a fascination fuelled sunset on the world and more. The beats of Cherasaro are pure hypnotism making a platform for the vocals and guitar caresses to singe and burn the senses and mind whilst the bass of DeCarolisa is a watcher egging everything on to its fiery climax.

LESS allows a breath to be taken with its reserved introduction before it too unveils bait that is impossible to resist, the bass conjuring a Cure like toxin that works on every synapse and emotion. With the vocals courting thoughts in their continuing to impress dark and grainy delivery, the song brings a garage rock lilt to its chorus before sitting back into that impossibly beckoning stance which set it deep into the passions initially.

The rapacious furnace BUG and the slowly crawling VEIL thrillingly finish off the outstanding release, setting a further charge of distinct and individual ingenuity to work on the passions. They simply confirm the thought and feeling throughout that Psychic Teens are quite possibly the best alchemists of sonic noise and post punk devilry today and definitely that the SRA Records released Come is one of the major treats of the year.