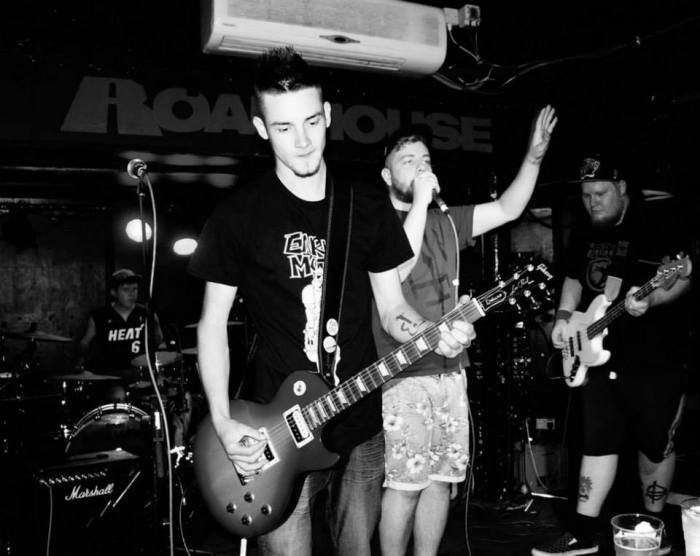 Having impressed with their previous pair of EPs, UK hardcore punks Dead Retinas return with their third offering and a new vocalist. The departure of previous singer Sam Hendo left some questions as to how they would follow his strong presence but the Gang Of Wolves EP shows it was with ease as new frontman Will Walkden slaps down his own identity and brawl upon songs. There is also a seeming shift in sound and band, an emerging maturity and you could almost say seriousness to their endeavours now which initially stops you in your tracks to consider the move and then finds you basking in its overall success.

Dead Retinas has over past couple of years stood tall as one of the most promising and best emerging punk bands in the UK, their riotous live performances, which has seen them alongside bands such as Four Short Of A Miracle, Landmarks, Falter, The City Divided, Zsilent Z and many more, and their pair of previous EPs, Dead Retinas vs. The World and Dawn Of The Dead Retinas. The new release only confirms the earlier stance of the band and thoughts left over them whilst still suggesting there is much more to come from the Manchester four-piece, especially with as mentioned this more business-like feel to their music. Gang Of Wolves contains a trio of songs taken from the earlier releases now re-recorded as well as three new ones and it is the older tracks which show the more ‘sober’ approach to a still rebellious middle fingered devilry.

The release opens with Snow, a track which is staring at the ear from its first rhythmic beckoning through to the creative casting of sonic

mist by the guitar of Jack Thompson and the prowling throat growling bass of CJ. It is a considered start and caress of the senses which is arguably new for the band and continues even as the angst driven squalls of Walkden score and scar the walls of the song. Expelling a fire bred intensity as it moves deeper into its compelling heart, the song brings a vehement climax to its recipient, evocative and fearsome but wholly riveting. There is a post hardcore breath to the track which also makes a fresh flame to challenge expectations over the band and helps makes a tremendous burn of an introduction to start things off.

The following Crowns On Hounds entwines tightly around the body next, metallic sonic flames of guitar in league with a gruff bass swagger that is instantly enticing within the ever crisp and challenging rhythms of drummer Lee O’Connor. Venturing in to Cancer Bats/Pinhead Gunpowder territory with a snarl and vicious sonic lancing of the senses to the fore, the track is a deliciously abrasive and distrustful beast of a song where the vocals of Walkden, backed as impressively by the additional badgering of Thompson and CJ, graze the synapses as potently and deeply as the sonic scything elsewhere.

The next three tracks are the revisited songs starting with Just Because You Drink Jack Daniels. Doesn’t Mean You’re Rock n Roll. A mighty mix of punk, hardcore, and noise, the track chews the ear with discourteous riffs and a rapacious bassline urged on by the still abusive rhythms of O’Connor. The guitar draws on a blues whiff to ignite thoughts further whilst CJ finds a bestial predation to his notes that sets the senses back on their heels whilst only having a hunger for more. Veined by an irresistible Dead Kennedys like groove with more hooks than a loan shark, the track twists the passions around its intrusive little finger to leave only greed for more in its wake. The track is as impressive as first time around but with a rein on the chaotic approach which marked its presence on Dawn Of The Dead, takes on a more potent presence, something which applies to the other pair of recharged songs. It has to be said though there is still a part of the heart that misses the no idea if the band would explode into bedlam unpredictably that endeared them previously.

Both LSD (Listen Smile Disagree) and Pure Gold exhaust the passions with their insatiable provocations and again the pair build on impressive first appearances to show an evolution in attitude, craft, and antagonism, as well as proving that Walkden is a worthy successor to Hendo. The first is a mix of predatory urgency and flesh peeling riffs stalked by the always hungry bass, the gang shouts an anthemic air punching draw which softens the senses before the finale of brain melting acidic sonics take their spiteful and thrilling place. Its successor is prime punk rock, a nostalgic air filtering through its hardcore badgering. Gallows meets Liferuiner, the song is a thrilling blaze of jagged riffs and concussively jabbing rhythms ridden by pure vocal hostility.

The closing title track is a thoughtful and thought provoking slice of caustic temptation which like the opener suggests the direction the band is moving towards. Still steeped in hardcore bitterness and punk gall there is a melodic hue to the rancor that sees the band expanding their sights and passions if still within their aural loathing.

Gang Of Wolves is a fine intriguing and exciting release, answering and suggesting more questions for the future. Like an end of a chapter whilst opening up a new paragraph for the band The EP leaves only eagerness to hear and feel the evolving force that is Dead Retinas, still one of the best emerging bands and now maybe just that much more impressive.

Get Gang Of Wolves as a name your own price download from http://deadretinas.bandcamp.com/