Home › Music › Album › I Plead Irony – This Statement Is False

I Plead Irony – This Statement Is False

As we all know rock ‘n’ roll can be a thing of striking beauty and in the hands of some artists at certain moments in time, something which encroaches on the realms of perfection or as close as it is possible to achieve that ever evading absolute. Such is the case with This Statement Is False, the debut album of UK rockers I Plead Irony. It is a masterpiece of rock music in its numerous vibrant guises, band and release an irresistible temptation which croons, rages, frolics, and rampages within the ear across its startling collection of impressively sculpted contagion posing as songs. It is without doubt one of the most exciting and compelling  albums this year, a scintillating mesh of hard, alternative, and indie rock with many more flavours swirling around its aural album of the year nomination.

The Farnborough based trio of vocalist/bassist Rauf Jordan, guitarist/backing vocalist Paul McDonald, and drummer/backing vocalist Lawrence Arnold, have a craft and maturity which roars within their first album as loudly and vibrantly as the sounds and energy they create. The three between them also create distinct sounds within the bands Ipanema, The Fins, Atomic Garden, and Welcome The Howling Tones, and probably more such the hunger to make potent and empowering sounds which burns within the threesome and fuels this outstanding release. Their debut was mixed by renowned French producer Guillaume Doussaud and takes the listener on an adventure driven ride with lyrical narratives which are as easily accessible for thoughts and emotions to relate to as the sounds wrapping them are for ear and passions. It is an irrepressible slab of fun and anthemic temptation, a ‘greatest hits’ like album in stature and infectiousness marking the entrance of one intensively impressive and potent rock band. 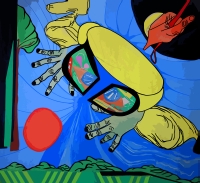 feisty intent makes an opening gambit before the passions. Eager guitars stroke the ear initially to awaken attention and once joined by the throaty snarl of the bass and the crisp punches of Arnold, the song provides an honest and striking piece of alternative rock enticement, ridden by the strong vocal tones and delivery of Jordan. It is maybe not the most spectacular start, the album reining in that treat until…well its successor, but it is a pleasing and bracing introduction.

The following Et Tu Brute makes a dramatic entrance, staggering its arrival before the delicious steely bass voice entwines its teasing tones onto the ear drawing everything into a hungry blaze of shadow clad almost sinister sonic declaration from each aspect of the song. With barbs lining the hooks of the song as sirenesque as the melodies and vocal smoothness surround them, there is no possible resistance to a tingle of lust for the striding anthem coated call of the song.

Things only go from strength to strength as both I Can’t Hear You and Honest Villain pull the passions to their feet for an emotive waltz of intensely impacting muscular beauty and punkish devilment respectively. The pair are sensational songs, the first a rising fire of emotional fervour that from an instant smouldering wash accelerates into a burning weave of passion, and the second a sturdy pop punk lilted stomp where the bass finds its most carnivorous throat yet and the guitars hooks that enslave instantly and permanently. One of the major highlights of the album, the song is a perfectly sculpted riot with all the power and bruising charm to secure full ardour in return for its contagion.

The height and strength of each individual sounding song is impossibly impressive, tracks like the virulently catchy [Insert Words Here], the compelling Timewaster (Behind The Glass) with its heart bred emotive heat, and the hot-blooded Faith Or Fear all charging thoughts and emotions with their distinctly unique yet uniformal impassioned grandeur and skilled tempting, whilst amongst them the superb Yourself Defence is the devil in disguise such its epidemically thrilling sonic bait and formidable rhythmic slavery. Riling the hungry ear instantly with the rapacious jaw of bass snarling ruggedly at its victim whilst the heavyweight jabs of Arnold intimidate with every jackhammer swipe, the track is a mercilessly enticing spike of brilliance driven deeper into the lustful affections by the emerging sonic swarm of toxic grooves and wonderfully niggling riffs. It is a brilliant mix of noise and raw melodic rock honed into a hornet strong sting of scintillating provocation and excellence, best track on the album and one of the most aggressively capturing suasions anywhere this year.

The magnetic Wrecking Ball and the voracious Sick complete the release, the final song another intensely magnificent chest beating clamour which simply leads to unbridled satisfaction and impatient appetite for more, bass and drums a threatening beast combining with the sweltering declaration of guitar and vocals for a lasting scald of invention and stirring craft.

This Statement Is False is exceptional, easily one of the most breath-taking and rousing releases found in a long time. Such its ravenous power and exhilarating imagination, it would be no surprise if under the term Rock ‘n’ roll there was a picture of I Plead Irony. Though they have a sound all of their own, in intent and ability to create infective triumphs the band will feed the hearts of fans bands such as Billy Talent, Reuben, Lostprophets and the like with ease.