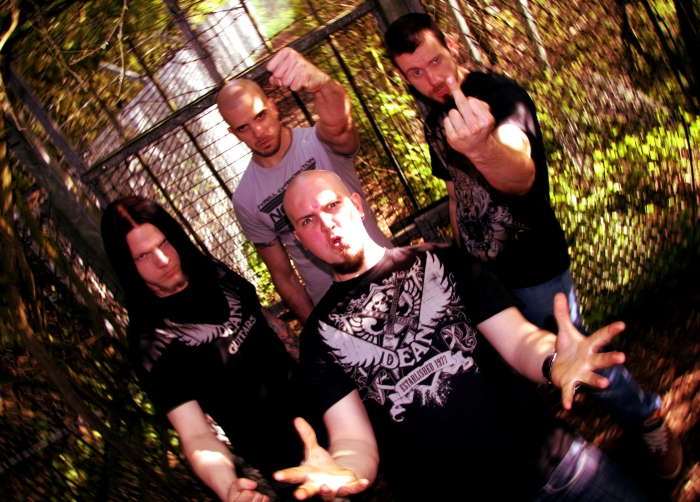 Welcome to one of the candidates for album of the year, certainly in the darkened hungry hall of this site. This is a contender which feeds and devours with imagination, craft, and a devastating predacious invention that takes the listener on one of the most enthralling dangerous aural journeys lying in wait this year.  The beast is At First Light and its creator UK death thrashers Arceye, a band who have built on earlier acclaim and promise to stand as one of Europe’s, if not the world’s, most creative bands.

The second album from the Shrewsbury quartet, At First Light sees the band at a pinnacle though still only one level of a mountainous evolution of their invention one feels as the album explores and expands thoughts and emotions. Formed in 2004, Arceye has been no stranger to critical acclaim certainly with from debut album The Divide Between Chaos & Order of 2009 which followed the As The Ground Consumes You EP of two years earlier. From the first album the band has continued to increase their stock with impressive live performances, a trait of the band from day one, which has seen them support bands such as Decapitated, Man Must Die, Beholder, Finntroll, and Kataklsym as well as making successful appearances at festivals at the likes of Bloodstock Open Air in 2010, where they closed The New Blood Stage, and Hammerfest. The new album unveils a strong evolution in the band’s sound though still bred on a canvas of prime thrash metal with invading death metal shadows, but now the colour soaked progressive nature of the foursome of vocalist/bassist Al Llewellyn, guitarists Dave Roberts and Luke Durston, and drummer Craig Mackay, explores greater rich hued narratives upon the muscular black hearted canvas. It is a stunning combination breeding scintillating and impacting songs, ones which either offer a devastating confrontation or a captivating evocation, but all that enthral and ignite the senses and passions.

crackling flames with an inviting potent guitar lure leading the way, the call of the title track increasing as rhythms and a darker tone add their beckoning whispers. Soon with drums unleashing their full sinews and riffs following suit soon after, the track opens up an intensive prowl which recruits attention and hunger with ease. Into its stride the song rampages with guitars and drums sculpting a battlefield of intimidation and senses barracking skill whilst the gruff scowling vocals of Llewellyn, ably aided at times by the backing scarring tones of Roberts and Durston, parade a venomous and antagonistic breath that only fuels the intensity of the song.

The following track takes things another rung up the immense ladder of the release, The Storm sonically what its name suggests with the already ridiculously impressive skills of Mackay caging the tumultuous and imaginative adventure and persistence of the guitars and again the great mix of vocal threats. The track is a fury of invention and innovative thrash/death exploration, its underlying groove a rapier like hook ripping the ear open for the melodic and extensive flames of the guitars’ emprise to tempt and magnetise the imagination. The bruising from the towering encounter are soon soothed by the short instrumental The Longest Drive, the thought provoking piece of elegant composing and its realisation a resourceful caress and prelude to the staggering might and presence of I Silently Wait. Honed from a web of grooves, melodic beauty, belligerent riffing, and a cauldron of ferocious rhythms and vocals, the aural predator seamlessly moves from rampant aggression to seductive kisses and on to voracious rage, subsequently combining them in an unpredictable and fluid transgression of magnetic enterprise.

The deliciously sublime progressive radiancy and smouldering invitational glory of Sirius follows to again transport thoughts and feelings into an instrumental painting of suggestion and emotive incitement, the song alone showing the full extent of the songwriting, skill, and imagination of the band and the even greater promise of things to come over the next horizons of the band. Its building height and emotional depth grows in potency the further the song pulls the listener into its powerful soundscape, transfixing them into place for firstly Brother Disarmed with its savage rabidity to stir up the nest of previously settled emotions into another welcome turmoil, soon reinforced by the riveting Prey Forgiveness with its cracking tempest of carnivorous creative fire and sonic fascination and the magnetic Damage Done where clean vocals make a strong and pleasing offering within the rhythmically stretching slice of melodic and imposing triumph.

The album is completed by the crushing, yet seemingly respectful onslaught of The Thirst, though the track still demands and is welcomingly given its pound of flesh, and the closing instrumental sunset Dusk, another instrumental temptress this time coaxed into the passions by outstanding mesmeric guitar play and the open skill of the band. They provide the perfect conclusion and parting reminder of the quality and strength of Arceye and their brilliant album. At First Light is a real joy, a release which tears you apart whilst kissing the wounds it is simultaneously chewing upon. One of the real treats of the year, maybe the very best.