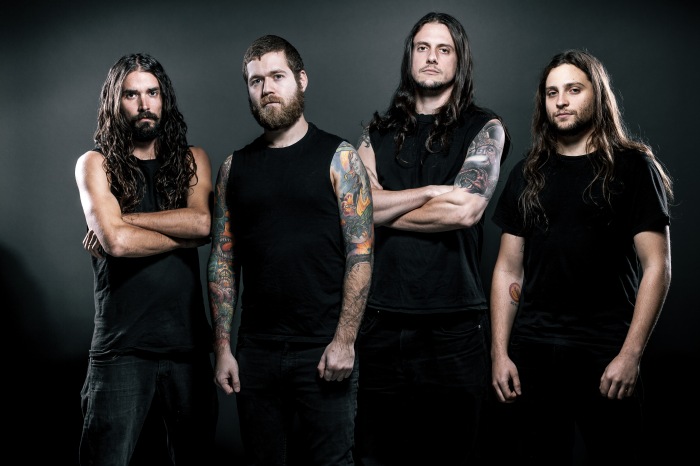 Set in a cauldron of scalding destructive riffing, stinging rhythmic confrontation, and broiling intensity which is bred from a technical craft which steals the breath from thoughts and lungs, the new self-titled album from US metallers Revocation is a colossal tempest of invention and sonic vitriol. Confirming the suggestions provided on the Teratogenesis EP of last year, the album takes things further to stand forcibly as not only the best work the Boston quartet has sculpted but one of the pinnacles of this year.

The fourth album from the band follows and builds on the success of previous 2011 album Chaos Of Forms reinforcing the line-up of David Davidson (guitars / vocals), Dan Gargiulo (guitars / vocals), Phil Dubois (drums), and Brett Bamberger (bass / vocals) who is making his recording debut since joining last year, as one of the most potent and invigorating metal bands around. The Relapse Records released album again sees the band stretch and twist their mix of death, thrash, and technical metal into something distinct and captivating but with a further evolution of imagination and inventive craft and hunger. The manipulative charms and potency of their sound is also elevated into richer devious toxicity making the release an unpredictable, scintillating, and enthralling scavenger of emotions and passions.

As the distinctly threatening avenues of The Hive open up their shadows to welcome the listener, thoughts and senses are fearing the 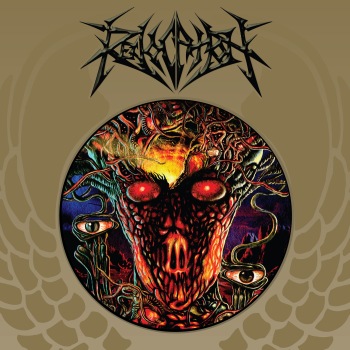 worst impending danger, and as the song erupts into a ferocious torrent of tight waspishly honed grooves and rampaging rhythms all assumptions are wonderfully confirmed, the track immediately a tempest of psychotic violent magnificence ridden by the guttural charms and malevolence of the vocals. The at times three pronged vocal attack is a tasty additional violation especially when caged within the staggering rhythmic tsunami of Dubois. It is a stunning start which just as you think you have its reins in check launches into a progressively hinted fire of sonic sorcery, the guitars of Davidson and Gargiulo mesmeric and lethal simultaneously.

The following Scattering The Flock has a swagger and underlying heavy groove as rapacious as the flesh peeling aggressive sounds surrounding it. There again is a lack of mercy in the undiluted expanse of ideas unveiled and thrust violently ross the senses, the shifts harsh and like battering rams at times but so superbly crafted they feel seamless and a natural progression of the riveting confrontation.  The band almost borders on fusing too much together but where others would fall in to chaos, in their hands it is a controlled and precise piece of composition, a perfectly sculpted sonic antagonism of cutting beauty.

The excellent start is matched by the equally impressive Archfield and then elevated by the exceptional Numbing Agents, the first launching from an enticing stroll of drum beckoning into a sonically hued emotive fire and the second breeding a slight hardcore nastiness to its carnivorous bite with acidic grooves and barbed hooks lying in wait for the passions within another tempestuous squall of breath-taking dexterity and senses slaughtering enterprise. With a sense of Retox to its individual declaration upon the album, the track is an absorbing pinnacle but soon challenged and given a run for its money by the predacious and magnetically charged Fracked. A wolf in a technically woven deceptive cloak of warm grandeur, the song clasps its jaws around the senses from its opening seconds, its throat snarling and grip tightening whilst the guitars paint a melodic narrative of sonic colour which feels welcoming but is secretly also corroding the defences. It is a glorious temptation which persuades with ease that its spite is a good thing, no arguments here.

The Gift You Gave is a deeply pleasing if less dramatic and imposing triumph as its predecessor but sets up the next mountainous peak on the album Invidious and its lethal captivation. As the ever impressive drums of Dubois creates a tower of punching rhythms insistently aided by the dark bass conjuring of Bamberger alongside flames of guitar, they are interrupted by a dance of banjo which teases and surprises before being consumed by the full force of sound and vocals delivering what can be best described as Cajun death metal. Ok that is a little misleading but such the call of the southern twang and irrepressible mischief of the track it is hard to use another suitable descript. A sublime storm of inventive metal, the song stands at the peak of the album and in many ways leaves the remaining tracks to put away the chairs and switch out the lights.

The last trio of the technically mesmerising instrumental Spastic with its bedlamic mystique, the voraciously expressive Entombed By Wealth, and the emotionally esurient A Visitation are certainly not making up the numbers though, each in their distinct ways startling sonic and melodic narratives upon insatiable rhythmic canvasses and tenaciously rigorous intensity.  Revocation has set themselves up on one of the top tables of metal with their fourth album and provided one of the year’s top contenders. Quite brilliant is the only thing left to say.