Dead In The Dirt – Blind Hole 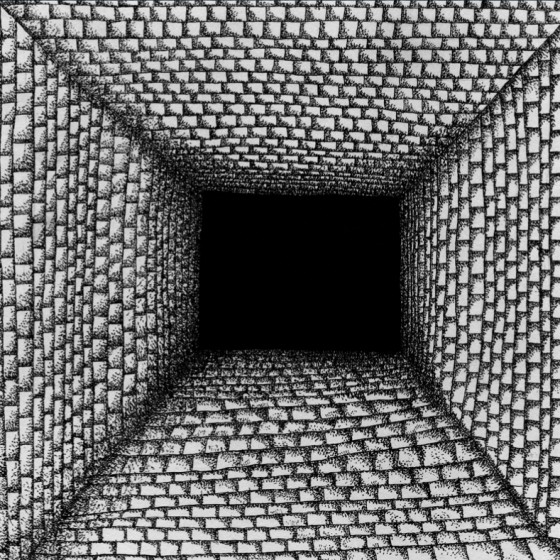 If you have already been exposed to the primal grindcore/hardcore force that is Dead In The Dirt through their two EPs, Void in 2010 and Fear the following year, than you are already bruised and battered by the band’s vitriolic sonic might and probably eager to stand before their debut album Blind Hole, a release offering might and hunger previously undiscovered within the band. If new to the devastation the Atlanta trio offers then hold on tight as their new full length takes you to the darkest, most violent, and vicious places possible, areas within that you probably never knew existed. It is a merciless destructor of senses and sensibilities, 22 songs within 24 minutes that chew up, spit out, and then roast with sonic fire the safety of your hopes and thoughts, let alone emotions.

Consisting of Blake Connally (guitar, vocals, lyrics), Hank Pratt (drums), and Bo Orr (bass, vocals), Dead In The Dirt return with an album, recorded with Andy Nelson (Weekend Nachos) at Bricktop Recording Studio in Chicago, that engulfs the listener in a merciless tirade of enraged socio-political lyrics and scavenging sonic acridity. From the opening torrential storm of Suffer, the album seduces and suffocates with its intensive hostility. As guitars flail away layers of skin from the senses with each sonic rub and the bass prowls like a heavy dark predator, the song fills air and ear with a melee of delicious vehemence from vocals and drums. It is a squalling sandblast of a fury which in its short presence leaves lungs gasping for breath and emotions aflame, whilst igniting deep hunger for all to follow.

The likes of the rampant seizure of the ears, The Blaring Eye and its successor the black hearted pit dredging Swelling tear down walls of sanity and hope whilst the thrilling You Bury Me arguably offers the first glimpse of a breathing space for the senses, its destructive passion and rhythmic toxicity gripped by an almost restrained groove and an acidic melodic wash. Note the word almost though as the track sears with a caustic and hungry rabidity that again only steals energy and passions.

Maybe surprisingly for an album of this size, track wise, and all of the very brief abrupt natures of their assaults, there is not a second or song which leaves you short on satisfaction wrapped provocative despoilment. Obviously some tracks will stand out for the individual but the depth and consistency of the aural pillaging and thrill of the whole album should be taken as a mighty given. Further personal highlights stirring up passions and appetite to the feistiest degrees come in the nasty shapes of the barbarically jawed No Chain, riffs and rhythms an irresistible horde led by the continually unyielding vocals, the intensively riveting The Pit Of Me where again the band fuse unexpected aspects to their turbulent scenery, and the prowling blackened doom laded Caged. The song is a sludge thick labour that expels a raptorial menace and challenge as it accelerates its intensity and ferocity.

The following incredulously addictive Starve with its pungent maelstrom of rhythms and hatred stands toe to toe with the pinnacles of the album matched by the outstanding Pitch Black Tomb, where again drums and bass cajoles violently the passions into lustful submission whilst guitars and vocals smear sonic mercury over the surrender, and the closing sludge /crust weighted Halo Crown which sucks the listener into an inescapable stranglehold of smothering ruthless fervency.

Blind Hole is a scintillating album which will be too intensive and dangerous for many but for fans of stark callous and inciting hardcore it is an exhilarating proposition. With their album released the same time as the debut from label mates and fellow hardcore stretchers Centuries, Dead In The Dirt is helping to take the genre to new exalted heights. There may be casualties of war on their rise but every ounce of blood and sweat spilled will be worth it on the evidence of their impressive release.