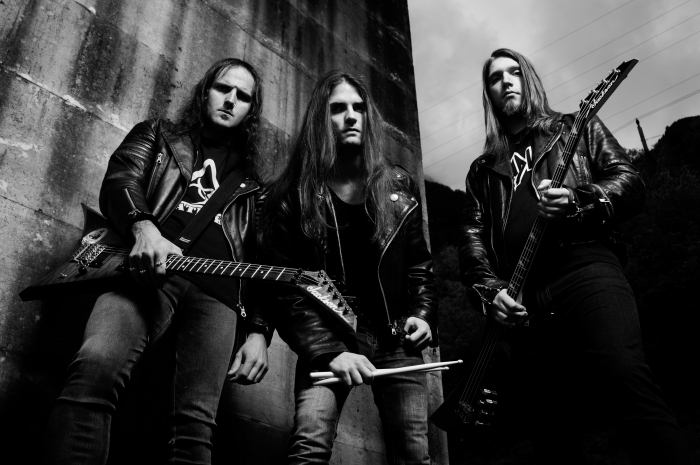 Fancy some thrash metal with the psychotic intensity of a serial killer and the scathing abrasion of a sand storm then Twenty-First Century from Italian metallers Death Mechanism is a must. Band and album just run amok through the ear with riffs flailing senses like a cat o nine tails, their touch lethal and lingering whilst the rhythmic accompaniment is a predacious stalk of already wounded aspects of the listener. Instantly magnetic and ultimately irresistible, the Scarlet Records released album provides a refreshing and insidious confrontation of pure thrash brought with a new and invigorating flair.

It is not quite flawless, a similarity across tracks at times a slight issue but in Twenty-First Century, the Verona trio which was founded in 2003 by vocalist/guitarist Pozza (bassist from Bulldozer) have unleashed one of the most niggling, impressive metallic irritants this year. Completed by drummer Manu (also from Bulldozer) and bassist Pedro, the trio drew strong attention and acclaim with debut album Human Error Global Terror of 2006 which also made up major part of Mass Slavery, an album released on Jolly Roger Records in 2010. This was enhanced further by their live performances which have seen the band alongside the likes of Bulldozer, Sadus, Sodom, Destruction, Tankard, Impaled Nazarene and more. Their sound is entrenched in eighties thrash, the new release often sparking thoughts of Slayer and Kreator to name two, but equally it has an individuality and modern spite, especially lyrically and through the rasping reptilian vocals of Pozza which sets it apart from most others. Produced by Tommy Vetterli (Coroner/69 Chambers), the album is a thrilling and lingering predator, an agitator of the passions which grips tighter with each assault.

effective and worrisome as a swarm of hornets, and as persistently aggravating in its contagiously compelling sound. Escorted vigorously by rapacious rhythms and further on the caustic scowling of Pozza, a delivery which probably not all will take to, the track violates every surface of the ear and beyond, it’s sonic temptation twisting across the disjointed gait of the song and around the vocals, their presence screeching vitriol from every syllable. The rabidity of the track driven by the bestial bass stalking of Pedro and the insatiable rhythm conquering of Manu  leaves no second free from malevolent manipulation and aggression. It is nasty and potent but most of all simply a great start, but also only the appetiser to the next track and an album which gets stronger and more excruciatingly addictive the further it goes into its synapse chewing heart.

The following Earthly Immortality is cut from the same vicious cloth with a presence maybe too similar to its predecessor to raise any further temperature, but again those stinging waspish grooves and riffs just secure full compliance to its breakneck gaited attack so no complaints there. Things do take an elevation with firstly Human Limits next and then Evolutive Deviation, both tracks offering another turn of the sonic and imaginative screw. The first creates a sonic lasso of riffs stroke grooves and a cage of bone splintering punches from Manu, all prowled by the excellent black hearted tones of the bass. Its successor is equally as fanatical in its intent, and again close in content, maybe too near, but with scorching flames from the guitar adding extra acid it still holds fascination enslaved.

The pinnacle of the album starts with Tipping In Front; the song is an unslakable pursuit of the senses, its riff and drum combination an incessant torrent of enterprising voraciousness. With an epidemically tempting lure to the underlying groove and a more open melodic toxicity the track is a glorious slice of edacious irresistibility. The rampaging Obsolete Cults does its best to keep the new level of triumph going with relative success but top honours on the album are further contested by firstly the excellent and creatively devouring  that is Hidden Legacy and then the tempestuous stomping of Exotropy, the outstanding pair split by the easily appetising Century Of Lies.

Completed by the ferociously tortuous Collapse 2000 A.D. which features Vetterli on guitar solo, Twenty-First Century is a real treat to consume and regularly. No it is not the most original thrash album this year or avoids slightly suffering with resemblant tracks but when that core sound and creativity is as scintillating and untamed as conjured by Death Mechanism you cannot help but be very greedy for more.