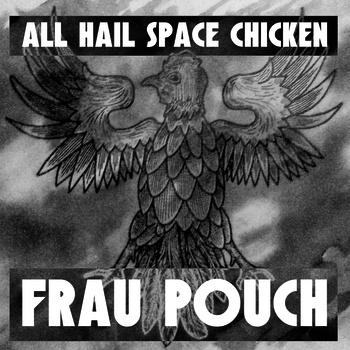 When we were first introduced to UK post punk meddlers Frau Pouch via their excellent split release with fellow Medway band Houdini, we called them ‘the bastard evil offspring  of an illicit intrusion between The Fall and The Victorian English Gentlemens Club with some fingering from The Cramps and Turbogeist.’ Their new EP, All Hail Space Chicken or it seems also just called the Space Chicken EP, shows that that description does not truly frame their distinctive sound so now we declare the trio to be the bastard evil offspring of a mutated alliance between The Fall, Swell Maps, and The Mekons with The Victorian English Gentlemens Club and The Cramps not forgetting Gang Of Four adding their dirty little digits into the mix.

The All Hail Space Chicken EP and band will not be for everyone but if those references mentioned play with your curiosity than Frau Pouch will tease out a lifelong passion for their unique presence. Consisting of Joe Wise (guitar/vocals), Ollie Crook (bass), and Suzanne Freeman (drums), the band has continued to impress and garner a fervent fanbase through their live performances around the middle of England spreading outward but the new release places them into another spotlight of individuality which deserves to find a corner in every punk and post punk lovers psyche.

Recorded and produced by Ben Sammon alongside the band, the release soon sets free its six track psychotic dance upon the ear with opener Krakthulhu. Immediately a carnivorous bass temptress snarls at the senses with delicious rabidity in its breath whilst beats punch the ear into shape ready for the expressively quarrelsome vocals and discord scowling riffs of Wise to play within. There is a Mark E. Smith lilt to his delivery at times which only adds to the drama of the attack whilst musically the song rampages with rhythms clamping their jaws tight and a raucous sonic distrust firing an encounter which is vintage like in flavour but equally driven by current day antagonism.

The production is as caustically raw as the sound and though it at first makes you stop and assess its merits certainly against previous releases with doubt, it does compliment the brashness of the release ultimately and the great start soon expanded by the gnarly presence of Podling Party. Again the bass of Crook is irresistible, it’s growling belligerence a mighty weapon in the sound and a defences splitting barb for the passions as it forms an irrepressible spine for the guitar to throw its acrid waltz around. That Swell Maps feel is ripe here whilst at times a further Nikki Sudden hint breaks through.

Both Don and Idiocracy reap the seeds set by the earlier songs to ignite even greater rapture for their disorientating infection, the first a rhythmic donkey punch on the ear leaving an unprotected canvas for its bruising grazes of sonic caressing and the concussive consumption from Freeman to defile the senses. It is another welcome riling but everything before is left in the shade of its successor. With a certain Gang Of Four bass framework being crafted from the off and the guitar of Wise adding a flesh which also recalls the Leeds post punk giants whether intentionally or by chance, the song is the biggest highlight of the release, the track marking Frau Pouch further as one of the brightest sparks in emerging music whilst emphasising the evolution in imagination and songwriting which is grips the release. There is also a very early Killing Joke call to the track which only adds to the incendiary power of the song and its carnally propelled stroll.

The track Space Chicken lurches its quick step of bedlamic energy and psychotic dance next, guitars and bass a scurrilous blur of riffs and movement across the drum puncturing punk plain of the song. The Fall in its heart and Joy Division in its unhinged mentality, the track is another limb disjointing joy which even Ian Curtis would find dancing to problematic.

The closing predatory Aqueducts provides the perfect uncompromising wiry and discomfort forging challenge to end and sum up this fine release. The track simply sweeps you away in its accomplished and technically sculpted hypnotic whirl leaving only sheer unbridled pleasure and hunger for more behind. With only the production to bear a little with as slight labour, Chicken Space EP is a post punk/noise rock treat and one genre fans ignore at their loss.