One of the strongly anticipated albums to be unveiled this year, Circumambulation the new release from US band True Widow, is just a masterful alchemy of shadows and light filtered through equally enveloping sounds. Towering in intensity, seductive in beauty, and consuming in atmospheric toxicity, the eight track album leaves the listener exhausted, invigorated, and submerged in its and their own emotional depths for a full aural and mental exercise.

The third album from the band has a sound which defies labelling, though True Widow themselves term it stonedaze. The trio merge a stirring mix of drone, post-rock, and shoegaze but continue to add further unique additives as their creativity evolves. The new release breeds further the essences of the likes of My Bloody Valentine, Baroness, and Earth into their own distinct flavour but into the brew also incorporates the pop warmth of a House Of Love and delicious distortions of a Sonic Youth. It is an irresistible alchemy that takes the listener on a journey musically and emotionally, a mesmeric and at times gnarly trip that explores the textures and extremes of thoughts and experiences. 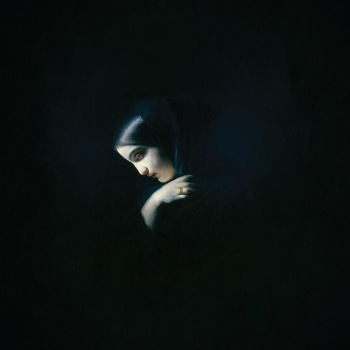 The Highest Heavens And From The Center To The Circumference Of The Earth (2011), but there is also a sense that the trio from Dallas is refining their imagination from deeper depths within their rich invention. As soon as opening track Creeper emergences from a destructive ambience with a wiry guitar groove twisting around the ear soon joined by the plodding thick bass call and crisp rhythms, the drift into undiscovered sinister realms is an evolving fresh encounter. The track is a slow stalking evocation teasing and intimidating around that almost fifties like groove call whilst the vocals of guitarist Dan Philips and aside him bassist Nicole Estill, bring a hue and warmth to the melodic persuasion that the senses just revel in. As the drums of Timothy Starks drive and cage the portentous breath of the guitar alongside the tenebrific air of the song wrapped in sultry heat and devouring ominousness, the track lies as a riveting contagion that works on every pore, sense, and thought.

The following S:H:S has a tall order to live up to the might of its predecessor but as the distressed ambience slowly swarms around scuzz lined guitar teasing and rhythmic evocation the band again has its recipient falling into a rich and thick weave of tempered aural fire. It is not as dramatic as the first song but walks the same plateau of temptation and potency as it creatively explores its sonic narrative on the way towards the best track on the album.

From its first sizzle of guitar beckoning there is a sweltering heat to Four Teeth. The song accosts the senses whilst simultaneously guiding them into a rapture which is truly ignited when the wonderful tones of Estill take the vocal lead and kiss the ear with harmonic beauty against the resonating flumes of sonic vapour pouring from every guitar note. It is a scintillating steamy embrace with roughened skin to its molten touch that simply leaves you lost in a pop inspired stifling haze. Another song which impacts on every facet of the emotions and body, it is a perfect slice of finely crafted inspirational rock pop brilliance.

As the imposing Numb Hand with its slowly burning grunge tinged labour and the equalling lumbering but darker brooding Trollstigen declare their testing intent and hypnotic stances, the album just sinks deeper and firmer into the passions, the second of the pair a predacious crawl into the psyche with the vocals of Estill again a merciless temptress. It uses repetition and doom spawned ambience as ripe sonic fruit within its bait and towers as another caliginous pinnacle on Circumambulation.

From the more than decent instrumental I:M:O, the release closes with the sweltering climes of firstly HW:R, a track coasting through southern rock heat with a tropical surf rock coaxing and melodic elegance, and finally the consuming and dense Lungr. The song slips into the darkest corners of mind and heart but lights the way with a beacon of melodic majesty and reverberating sonic imagination that leaves the listener immersed in enthrallment.

Circumambulation is sensational and though it arguably lacks the hunger to go to the very darkest places it is one of the most rewarding and thrilling albums to enwomb the senses this year.

Tags: As High As The Highest Heavens And From The Center To The Circumference Of The Earth, Baroness, Circumambulation, drone, Earth, House of Love, My Bloody Valentine, post rock, Relapse Records, RingMaster Review, shoegaze, True Widow