Mickey & The Mutants: Touch The Madness

If anything from psychobilly to fifties rock ‘n’ roll and rockabilly to rhythms & blues gets your feet and heart eagerly moving than we just might have the album of the year for you in the mighty shape of Touch The Madness, the debut release of UK rockers Mickey & The Mutants. Multi-flavoured and insatiably contagious, the album is a storming slab of mutated rock ‘n’ roll brought with all the craft and devilish guile you would expect from the experience and invention of its creators.

Mickey & The Mutants is made up of double bassist/vocalist Mick White (ex-Guana Batz and ex-Meteors from the Mutant Rock/Wrecking Crew and arguably best era of the band), guitarist/vocalist Norm Elliott, and Sharks drummer Paul ‘Hodge’ Leigh. It is a trio which on past history we admit we here had greedy expectations of but with Touch The Madness they surpassed everything wished for with a wonderful devilment borne from honest uncomplicated rock music. Formed in the summer of last year the band, on the evidence of their debut, only has the single intent and that is to provide an unforgettable, high quality, bruising party for the senses and passions, something they succeed in doing within the first three songs alone and reinforce time and time again across the twelve track release.

The title track opens up the excursion through the ‘bedlamic’ enterprise’ and imagination of the band, a lone guitar and distant 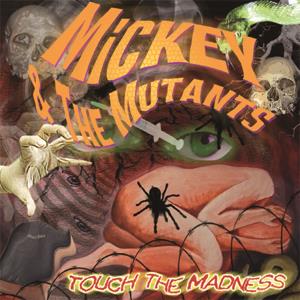 psychotic wails displaced by a barrage of rumbling beats from Hodge and sabre like riffs from Elliott. Amongst their instant persuasion the nimble fingers of White bring throaty bass slaps into the mix and slightly crazed vocals which within the devil bred brew being cast recalls The Orson Family in touch. The song is pure psychobilly and an evocation of primal urgency to join its hungry commanding mood. The track also gives portent of the album ahead, its body a twisting and varied temptation that has limbs and voice offering their well in our case, feeble blasphemous help.

The following Elvirista (Queen Of The Dead) teases with again a single coaxing of guitar before once more the rhythmic potency of the thumping drums and belligerent bass provoke and fill the song with such depth and menace you feel you are about to succumb to aural voodoo. The vocals of this time Elliott, the vocalist within songs being who penned them, have a dark demonic shadow to their narrative which like and with White before, brings great character to each slice of devilry and the release as a whole. The track smoulders with wanton seduction and enchanting intimidation which again receives no resistance as it takes passions into realms of rapture.

These Ol’ Bones explores a country rock seeded field of compulsion which sounds like a mix of Th’ Legendary Shack Shakers and The Screaming Blue Messiahs, whilst veining itself with some tantalising blues guitar licks and flames which ignites further the immense pleasure the impossibly addictive song has already sparked. It completes one of the strongest starts to any album in a long time, but it does not sit back on its laurels or take a rest as the excellent Jacob And The Well Of Love and its successor Something Bad’s Comin’ Outa The Ground soon show. The first also walks with a rhythm & blues swagger and lilt to its mesmeric stroll whilst the second of the pair is a slow canter around another blues narrative that leaves the lips of satisfaction licking feverishly.

Adrenaline soon opens its boosters again as the old school stroll of Blonde Haired Assassin takes the ears in its Gene Vincent/Blue Cats like palm of sound. Not for the first time on the album the guitar of Elliott is a delicious blaze across the sky of the song whilst White leaps over the senses with his upright skills and Hodge simply hypnotises from start to finish with instinctive rhythmic bait.

If the album stopped here it would be fair to say acclaim would still only ooze from these words but thankfully it is only midway into its rewards and soon raises the temperature further with firstly the contagious punk driven Rock n Roll Messed Up My Mind and even more so with Phantom Of The Opera. The second of the two is to all extent and purposes a cover of the Meteor gem on their Wreckin Crew album of 1983, though as it was written by White anyway maybe cover is the wrong word,  nevertheless he has just reowned it with the stunning version on Touch The Madness which we would suggest surpasses the previous version, it is that good and still one of the most riveting psychobilly songs of all time.

Burn You Sinners Burn just stomps over the already seduced heart with another dark toned piece of rockabilly majesty, White and Hodge creating a menacing wrap of rhythmic menace psychotically ridden by the vocals of Elliot and his sweet toned guitar caresses. It is pure aural manna which is sidled up to in quality by the sultry and dangerous mystique of Kiss Of The Spider Woman. Winds of surf rock wash over mariachi whispers to draw out a sweltering ambience which soaks every pore of the body and senses.

The album ends on the twin psychobilly enticement of Zombie where every aspect of band and sound stalks the passions with all the relentlessness of the risen dead, the song feeding off on the eagerly given submission to its virulently infectious jaws, and the insatiable Mind Control, the only time the band really reminded of The Meteors. It has to be said expectations to like Touch The Madness were strong but to the depth that we did was wholly unexpected and greedily taken. Mickey & The Mutants has opened its account with a killer album, one which is not quite up there with the major genre classic but easily one of the very best rock ‘n’ roll albums heard in a long time.

Like Loading...
‹ Reigniting passions and fight: An interview with Yap of One Minute Silence
Heart Attack – Stop Pretending ›