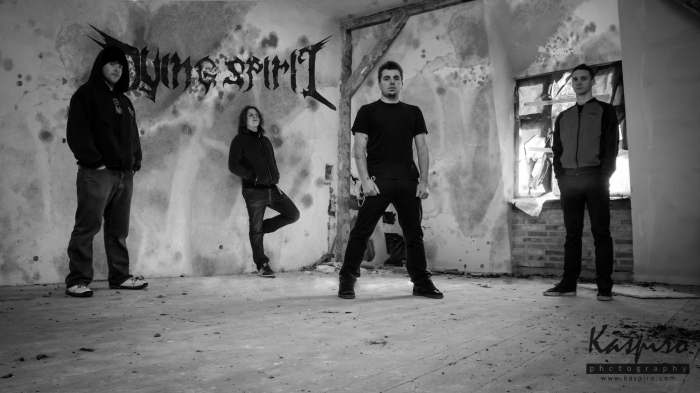 It might not be a release to create earthquakes in the stability of already explored extreme metal but Uncomfortable Silences, the new album from Polish metallers Dying Spirit, is easily one of the more inspiring and invigorating releases to burst forth this year. The nine track release is a towering predator of inventive and intrusive intent but an album which kisses the damage caused with scintillating melodic and imaginative sonic temptation with is quite irresistible. As mentioned it is not breaking down boundaries but certainly lighting them up with a fresh and ravenous enterprise.

From Ujscie, Dying Spirit formed in 2004, going through a few line-up changes before releasing the demo Rebirth in 2006. The songs had an old school death metal core to their sound with a slight progressive breath which has evolved over the years to the multi-textured and flavoured blend of metal rampaging through the new album. Further changes in personnel followed before the band reached the stability of the current line-up and released debut album The Progress of the Regress in 2009. Well received and with the band gigging intensively at home and further afield, the quartet of founding member and guitarist Lukasz ‘Uhu’ Sowa, bassist Tomasz Wu, vocalist Dawid ‘Bochen’ Bochenski, and drummer Maciej ‘Twardy’ Twardowski, have now stepped things up musically, creatively, and in intensity for Uncomfortable Silences. The Mulligore Production released album is a brute of an encounter which looks set to make the band a worldwide presence such its force and expansive potent sounds. It is the key to greater things for Dying Spirit you can only suspect as the album chews the ear and beyond. 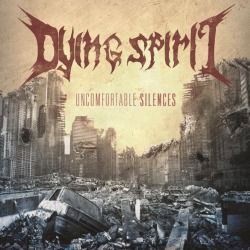 once a storm of caustic riffing, uncompromising rhythmic provocation, and tight sonic lashings stand over the senses and score them with incisive and enticing venom. The vocals of Bochenski squall with a guttural malevolence which is and proves across the whole album, as with the sounds, to be impressive and varied enough to constantly pull intrigue and captivation from thoughts and appetite. With a tonic of a groove searing air and the flesh of the ear from start to finish it is an impressive start to the album but one which is only the entrée to the intensive storm to come.

The following Tolerance opens with another blaze of rhythmic demands veined by a delicious waspish sonic groove. Into its stride the track darkens its presence with a throatier scowl across all aspects and its intensity to add stronger intimidation to the persistent scourge of contagious rapacious temptation and aggressive persuasion. The insidiously grooved enticement niggles and worms itself into the psyche so that once the song has concluded its business it is still working away at thoughts and passions, whilst the defined and elegant solo is icing on the consuming rabidity.

Through the torrential rain of riffs and rhythm craved barbarity thrusting the raptorial Hoax into the welcoming ear, the album continues to fire up the emerging rapture but it is You Write Your Own Story which seals the deal and confirms that Uncomfortable Silences is something special. Whereas its predecessor was the darkest primal confrontation this song wraps its serpentine maliciousness with a tirade of exhausting invention and imaginative intensity; grooves, infection driven riffs, and insatiable twists of melodic and sonic ingenuity a perpetual maelstrom of crushing fascination. Unpredictable and wholly magnetic, the track is a tempest of metallic incitement seeded from numerous styles and a scintillating cascade of unparalleled wondrous destructive alchemy.

The likes of the ruinous yet seductive System with its ingenious and corrosive evolution across at times a charm lit length, and the uncomfortable but alluring Great Expectations where again riffs and grooves find a stretch to build into a thrilling swarming provocateur within the burdensome and weighty gait of the song, provide another immense suasion to devour the album greedily. The same can be said of the closing pair of songs, Dokad Zmierzam and Distorted Choices, both of which leave senses and emotions a wasted and breathless victim as they carnally push the album to even darker forgotten corners of the soul. The first is a restrained but tornado like consumption sweeping the listener up into a black hole of emotive and creative viciousness whilst the closer preys on the carcass with fatigue offering voracity across its intensity and enterprise.

Uncomfortable Silences is an exceptional album which bruises and rewards with passion and invention whilst marking Dying Spirit as a band with all the qualities and craft to become a leading instigator of extreme and imaginative metal.