With nostrils flaring and muscles flexing to their limits Snakeskin, the debut album from Belgium rockers King Hiss, is a mountainous terrain of thunderous rhythms, voracious riffs, and exhausting energy.  It is  a powerhouse of a release which draws the potent essences of melodic metal, hard rock, and stoner rock, not forgetting at times a caustic breath of hardcore, into a confrontation which leaves the senses ignited and passions soaring. Consisting of seven tracks feeding off  inspirations from the likes of Red Fang, Black Tusk, Corrosion of Conformity, Down, and Clutch, Snakeskin is a powerhouse of an album, one injecting new blood and predatory strength into rock music.

As soon as it emerges from a sonic mist and finds its feet, the opening title track launches into a tirade of contagious riffing and 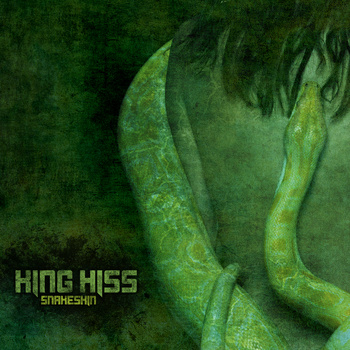 rhythmic barracking, a tight beckoning groove winding the passions around its call within moments of its appearance. The vocals of Jan Coudron begin their impressive narrative next, his voice having an excellent grizzled tone and a melodic power which sends every syllable to its target with purpose and appeal. It is an instantly enthralling encounter rising to greater temptation with the ridiculously catchy chorus and further seductive grooves amidst a tempest of rhythmic provocation from drummer Jason Bernard and bassist Dominiek Hoet. Such its immense presence there is a slight suspicion the rest of the alum will struggle to match its heights but its successor soon dispels any doubts.

Into The Mountains opens with a carnivorous bass groan and rolling drums, their jabbing persistence hypnotic and persuasive alongside the predatory lines of Hoet. It is another irresistible start taken to greater heights when guitarist Josh Fury unleashes sizzling melodic flames and air carving craft. It is an absorbing blaze soon taking on an intensity and raw almost muggy encroachment which sears flesh and soars across the senses raining down sonic adventure alongside further vocals persuasion. The track easily matches the opener and though across the chorus there is something familiar, though impossible to pin down, it is another refreshing and impacting treat, especially the blues lined solo leading to a riotous climax.

Both D&F and Endorphine swagger and stroll through the ear to equally impressive effect, the southern rock whispers in the sound heated and sinewy, especially in the towering hard rock embrace of the first of this pair whilst the second reveals sturdier textures and dramatic fires within its Mastodon meets Kyuss like invention. Again grooves dangle pure irresistible temptation from their lures whilst vocally the group harmonies find an emotive heart not lacking in previous songs but given a clearer canvas to lay out their rich feelings here. Though both tracks just miss grabbing the plateau set by their predecessors they still capture the imagination and compel the passions to greedily accept them.

Rollergirl though is not happy to accept second best and from her opening crescendos of fire bred sonics and tsunami tall rhythms rampages with high octane energy and virulently compelling infection loaded riffs and hungry drum enticement, the bass groaning with primal rabidity whilst acidic melodic fascination from the guitar scorches ear and beyond with skill and imagination. It is another bruising triumph which colours the passions until full but still lustfully wanting more.

The final pair of tracks ensures there is not one ounce of dissatisfaction or unfulfilled appetite, The Greater Good an ear burning, senses tearing juggernaut of hard rock and classic metal spicery wrapped in the passionate muscle bound vitality that is King Hiss whilst the closing Word Made Flesh, from its opening bass devouring of the ear, is a scintillating rapacious consumption from a delicious and insatiable rhythmic ravaging and sonic scalding. Like Crowbar meets The Sword it is an epic and towering conclusion to a staggering album.

Whether Snakeskin offers anything new can be debated but you know when something sounds this good and raises passions and energy to such heights, who really cares. King Hiss is a force of the future, hell they have already made a deep branding am mark with this, one of the albums of the year.