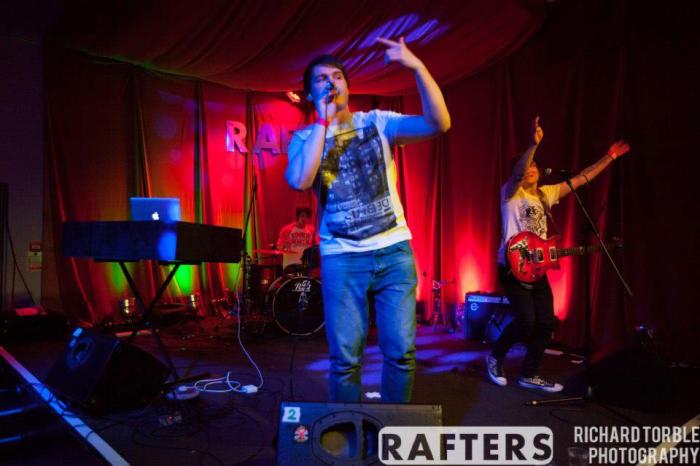 Taking limbs and spirit on an energetic charge of vibrant and imaginative adventure, the self-titled album from UK dance rock band Go-Zilla certainly surprised what were admittedly limited expectations going into it and sparked nothing less than the urge to eagerly shout out about what is an invigorating and enterprising release. It is not without flaws and moments where passions are not sparked into any kind of flame but for the main the London trio has created a triumph which has energy and appetite hungry for more. 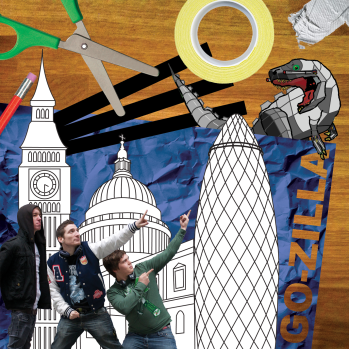 horizon, at the moment just brewing in the band’s inventive thoughts, but the moment the opening Go-Zilla (Intro) emerges from the shadows with pulsating beats and refreshing melodic temptation, senses and emotions are scooped up in a brief but lasting riot. The synths douse the ear in incendiary dance calls whilst rhythms stomp with sinews bare-chested within the embrace and though it is barely over a minute the instrumental arouses a greedy appetite with ease, a brewing greed soon being satisfied by the following Camden Queen. Once again drums and rhythms lay down heavy boots to draw on primal needs whilst guitars and synths sculpt a warm and intensity fuelled dance. The vocals singular and as a group are impressive, both elements melodic and harmonious within a Pendulum like temptation which leaves the listener breathless but primed for more of the same.

As much as more of the same would have been welcome, Go-Zilla have too much going on in their imagination to simply keep to a winning formula and pleasingly across subsequent tracks show an exciting range to their songwriting and sound. Our Tomorrow which features guest vocals from Gemma Dand, opens with a great horn blaze before walking a restrained gait as antagonistic vocals make a harsher narrative. Once into its stride the melodic calling of the band leads into an enjoyable mix of alternative and electro rock, a mix of Enter Shikari and Funeral For A Friend with an open contagion to its emotive persuasion.

Get On the Dancefloor is one of the songs which you take to bed and bust moves to in your dreams, its infectiousness as virulent as lust in a school of teenage boys, and just as lingering. With the punk feistiness of Hadouken egging on roaming electro fingers the track is a tempest of insatiable beats and rabid energy though also containing some moments of listless calm which is ingeniously and smoothly entrenched into the kinetically driven party. It is an excellent track showing yet further depth of diversity in itself and the album, as do the likes of the following Throwdown, a track which is as much pop punk as it is electro rock, and the emotively woven Chasing Shadows. Both tracks in their different ways mark a shift in the release to more indie rock seeded designs though still the synths and electronic heart of the band steers the intriguing endeavour, the second of these two adding a slight hip hop essence certainly to the vocals. Though nicely done the track is one of the weakest and less inspiring on the album but still gives credence to the promise flowing throughout every second of the album.

What Would You Give also struggles against the stronger tracks though it’s Hollywood Undead like snarl leaves good impressions even if the group vocals later on have the opposite effect, but things are soon blazing again with the duo of Don’t Wait for Me and Keep Breathing. Completely unexpected and out of character for the album so far, the two songs are acoustic guitar driven tracks of melodic beauty and impressive vocal elegance, the first still infusing potent electro narratives and the second an anthemic heart bred glory with loud melancholic whispers. It is a stunning track and rivals for best on the album whilst furthering yet again the depth of the band’s imagination and skills.

After the more than decent aggressive stance of The Rise, the album ends on another highlight in Wolfpack. Featuring the great vocal tones of Betty Be Famous, the track returns to the opening punchy dance of the album, bone shuddering beats and electro squeezes chaining up the senses for melodic waters to lay their dramatic caresses upon before the track sways and writhes with addiction forming wantonness across the ear with more teasing enterprise and striking craft.

The album still suggests that Go-Zilla is looking or deciding on which way to take their sound and ideas but it also shows they have many options which they have explored on the release with imagination and impressive invention. It is about time the likes of Pendulum had real competition and though really it is too early to declare, Go-Zilla suggest in time they might be one up to the challenge.