Amon Amarth – Deceiver of the Gods

Continuing their ever impressive and powerful stance within melodic death metal, Amon Amarth unleash ninth album Deceiver of the Gods, a thunderous expanse of aggressive energy, dynamic enterprise, and melodic flames. Bursting with the prime essences and sounds the band has become legendary for, the release also sees the Swedish quintet pushing those elements into newer intensive imagination and adventure. It is being hailed as the band’s finest moment, something which can be debated long into the night considering the might of some of their previous releases but it is certainly an album that leaves a potent satisfaction and pleasure in its wake. The downside to the album is that despite all its strengths it is fair to say that there are few tracks or moments which linger in thoughts and memory when away from its undoubtedly impressive presence. It is hard to say why this is so when it is an openly thrilling companion when facing its immense stature eye to eye and certainly in its muscular embrace it is a richly enjoyable confrontation and that is in many ways all that matters.

The Metal Blade Records released album has been recorded with legendary producer Andy Sneap (Cathedral, Arch Enemy, Cradle Of Filth) and comes with a definite live feel which the band was seemingly looking for, vocalist Johan Hegg saying “We wanted more of a live feeling to the recording and we felt that Andy’s style of producing could definitely help us with that. At the same time, knowing the records he worked on previously we felt he could probably help develop our sound so it became a little bit more angry and dangerous, without that polished sheen of our recent records.” It is a fiery encounter with an abrasive edge to its ravenous  exploits, a rampant raw and explosive persuasion of classic and melodic death spun enterprise around an expected narrative seeded in Norse mythology.

The title track opens up the release with warm winds of sonic and melodic tempting, its initial embrace soon squashed under 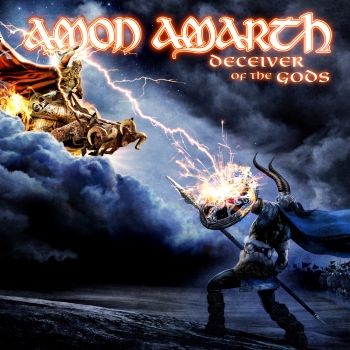 rolling sinews from drummer Fredrik Andersson and a tirade of ravenous riffs. The rhythmic intimidation gallops into deeper provocation as the vocals of Hegg, as impressive as ever, squall and add caustic animosity to the now charging sounds. Into its heart the melodic craft of guitarists Johan Söderberg and  Olavi Mikkonen sculpt a colour emblazoned temptation before handing over to another rabid burst of urgent and predatory intensity. It is an impressive start which awakens sure appetite for the album ahead, a hunger duly satisfied in varying degrees by all tracks.

The following As Loke Falls is an open contagion of rapacious riffing and equally inciting rhythms, a track employing intense and harsh manipulation of the senses through near brutal energy and skilful melodic shaping of the song’s voice, whilst both Father of the Wolf and Shape Shifter step up to tease the passions with recognisable yet evocative invention. The first is a primal collision on the senses, its ruinous impact persistent and invitingly savage with the bass of Ted Lundström a beckoning lure, whilst the second, one of the biggest highlights on the album, is a bestial tempest of charging riffs, sonic teasing, and rhythmic goading. With vocals equally predatory and delivered with a great diversity to its pack like menace, the track bends the will of the listener into full compliance for its imagination and instinctive inducement.

The biggest and one moment which does not disappear with the trailing whispers of sound of each song, is the outstanding Blood Eagle. A melodic barbarian, the song is a coarse and savage storm which ignites the strongest emotions and primitive urges, riffs and rhythms colossal purveyors of vengeful and ingenious barbarity whilst once again the melodic imagination intrudes and fingers the very heart of the passions.

Through the likes of We Shall Destroy and Hel, which features former Candlemass vocalist Messiah Marcolin, the release only feeds the needs of the best melodic death metal and Amon Amarth albums with adventure and innovational thought whilst the closing Warriors of the North brings an immense epic conclusion to Deceiver of the Gods. There are so many great things to say about the excellent album and its individual songs when in its company but the fact that even after listening to it multiple times that it is very hard to recall its contents without sneaking another listen stops it from being a classic and a pinnacle of in the band’s creativity. Despite this for melodic death metal, Deceiver of the Gods is an album worth every second of your time.