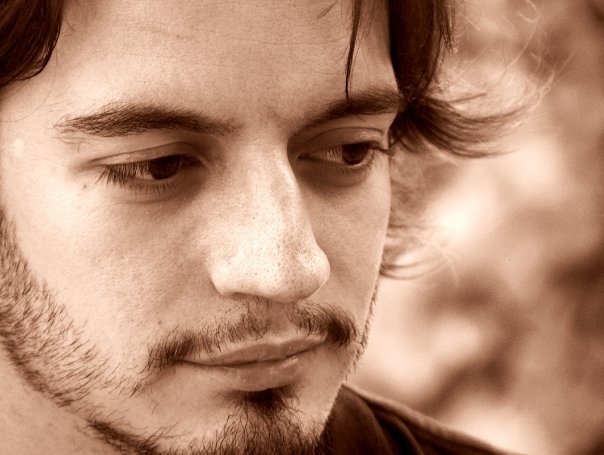 Though it took a few journeys to fully seduce thoughts and emotions The Dawn Of A New Creation, the debut album from Garth Arum emerged an enthralling release and experience which is intriguingly unpredictable and invigoratingly skilfully crafted. It is an adventure taking in varied melodic landscapes and diverse sceneries bred in multiple genres and refreshing flavourings.  As mentioned it takes time to totally persuade but once enamoured with its imaginative premises the album is one to linger long in the passions.

Garth Arum is the solo project of Nightmarer, the vocalist and guitarist of Spanish avant-garde black metallers As Light Dies. The project has its seeds in compositions which the musician started in 1997 and completed in 2003, The Dawn Of A New Creation, the first of possibly four proposed releases which unveils eleven of these striking and inventive songs. The tracks are vibrant pieces of avant-garde experimentalism fused and veined with the hearts of ambient sounds, classical compositions, and dreamy electronics, resulting in songs which capture the imagination whilst taking flight with thoughts and emotions through riveting and entrancing soundscapes. The album is at ease in venturing  through bright and vibrantly warm scenery or shadow drenched darker climes, often seamlessly merging both into the same breath of imagination as it traverses desolate emotive realms and evocative fantasy clad glories within moments of each other or simultaneously.

The Satanath Records released album starts with the beauty and splendour of A New Creation, the opening crystalline melodic

waters of the track soon wrapped by the sinews of jagged riffs and angelic harmonies provided by guest Cecilia Tallo from On3ric4. It is a short invitation which beckons with a warm and beckoning grace skirted by harder emotive shadows and evocations. Its brief presence is soon taken by Shadows Of The Past, another song with a beauty clad start, this time provided by great piano caresses and soon after symphonic embraces. It is a mere few moments though before the muscular intensity of the track explodes to darken the skies, riffs and rhythms building up their intimidation, though again it is a swift cloud as the song evolves into a stirring mix of both extremes to feed every appetite, the vocals offering a scowling blackened breath whilst guitars bring flames of melodic invention. Incendiary to thought bred imagery and senses, the track lights up a cascade of ever shifting investigations as emotional textures steal the imagination for its own provocation.

The ferocious start of A Barrage Of Hate is soon swapped for an irresistible groove and barbed hooks which shuffle between seducing and chewing up the ear. In another scintillating rampage across the emotions the track combines a clutch of opposing styles into one inciting passage, a song which employs black and death metal as well as classical and melodic rock for what could be the first ‘extreme pop metal ‘song. It is a tantalising track which defies description but asks to be labelled with a plethora of tags, but simply it is in a class of its own, as is the album.

Through the likes of the excellent The Path To Oblivion featuring the voice of Lady Carrot from Aegri Somnialends, a song which is a combination of gothic metal and early The Cure, and Rusty Hands with Slo from Smohalla providing the vocals, the album continues to impress even if slipping below the highest plateaus set by earlier songs. The second of the two songs toys with ears and thoughts, further chilling ambiences and intrusive rhythmic enterprise drenched in rabid invention locked in with sonic discoveries and acidic melodic weaves which are brought to bear on the great vocals harmonies. It is soon surpassed though by the warm seduction of Trip (Part I), the track again witnessing the soprano grace of Lady Carrot within folk spiced metallic fascination.

Further highlights on what is a persistently impressive release come with the deliciously fiery almost bedlamic dance of Lucid Dreams and the caustically black atmospheric Yearned freedom which finds the vocals of Camille Giraudeau (Smohalla and Stagnant Waters) adding their strong expression to the impacting tempest. The Dawn Of A New Creation is an album which inspires the imagination to create its own narrative and emotive canvas  whilst leading thoughts into varied ventures with each listen, especially as each endeavour sees more corners and depths discovered by the listener. Fresh and truly imaginative the album is destined to leave very satisfied hearts in its wake whilst igniting hunger for the next episode of the Garth Arum project.