Screaming Finalities: an interview with Jimmy Lundqvist of Entrails

From a ‘false start’ in the early nineties Swedish death metallers Entrails was resurrected by founder and guitarist Jimmy Lundqvist fourteen years later and since then has made an impressive mark with its old school seeded sounds and releases such as second album The Tomb Awaits. New album Raging Death builds on the might of its predecessor whilst twisting the existing malevolence into new tortuous and compelling exploits. Seizing on the chance to find out more with Jimmy we asked about the history of Entrails, the album, and moving through early setbacks.

Hi Jimmy and welcome to the site, many thanks for taking time to talk with us.

You have just released your new album Raging Death, how are feelings in the Entrails camp right now and how have initial responses impacted on you?

We are doing just fine here… It all feels great and we are satisfied with everything so far.

Do you get nervous before releasing an album or is it all excitement?

A little bit of both I would say…

Though this time all excitement was gone a few weeks before the release when there was downloading links everywhere on the internet. That ruined all the fun with the release and every hour and minute we had to use in making this album. I know it’s the modern era now and every band have this problem but it’s a fucking shame that they don’t have any tools to stop this illegal shit.

Before we talk more intently about the album can be look at the history of the band for those new to you. Entrails formed in 1991, what was the spark and inspirations behind the birth of the band?

Well. The boom of the DM bands that came around in the early 90´s and the down tuned guitars and with those riffs and atmospheres… That was Christmas to me… I was completely sold in that style, and there was no doubt in what we were going to play.

This period of the band did not work out and was only around as a working project for around three years, what were the problems which brought the band to a close at that point?

Many things. Crappy recordings, lack of interests, money, contacts, living on the countryside, you name it… Everything was going against Entrails sort of. If we only had managed to make a proper demo I think things would be different… though the dudes in the band back then would have quit anyway as they didn’t have the passion for it as I had. And living so far away from the musicians there was no other options than put it into sleep

Did the frustrations at the time bring lessons and help shape not only the second coming of the band years later but your endeavours between the two periods of Entrails?

Hard to answer as I wasn’t thinking in that direction. But I was more grown up in the second coming and had more focus on the music and a goal to have my demos recorded as they should be.

In that ‘hiatus’ for the band what were you up to musically?

Well… I listened a lot to my influences and tried to follow the music that was made after I quit playing myself. But I didn’t like the new stuff and where the DM was heading so I stopped following that and become more and more stocked to the old stuff. Of course there were new bands coming and they got my support but still the modern shit was not my cup of tea!

2008 saw Entrails resurrected, what was the trigger to this?

Nostalgia and I wanted to record my old music properly. That was the main reasons.

Was it an easy decision to try again or was there some reticence at first about bringing the band back?

Not really…It was pretty easy, but I didn’t think of having the band in full scale, only to release the songs as demos or whatever. But when label and organizers wanted us for shows I had to make it complete. And I haven’t regretted a single second about that.

Tell us about the years between steeping back into Entrails and the release of the excellent The Tomb Awaits of 2011, where we first came across you actually.

To make it short; I made those 2 demos in 2009 “Reborn” and “Human Decay” and signed to the label FDA Rekotz winter 2009/2010, then we made the first full length “Tales from the Morgue that spring and we had that one out in the summer 2010, then after that we recruited Adde for the permanent drummer and off we went on a small tour in Germany in November. Then we dealt with labels the whole winter but finally FDA got our signature once again and the work with “Tomb Awaits” could begin.

How have your sound and ideas changed for you since bringing back and reworking tracks for your demo Reborn and the songs seizing the senses on Raging Death?

The sound on the demos was mixed by me…and then I was a complete amateur in doing such so the sound became very thin and didn’t have that punch as I wanted. And after that and when the real albums was going to be made things had to be changed and I contacted Dan Swano at Unisound to do the mixings and from that day he is the guy who does what we want in the sound.

Are there any seeds from your earlier period of songwriting within the new album like previous releases?

Yeah. There are some parts here and there… for an example, ‘Bloodhammer’ is actually the first DM song I made back then. But now it’s a bit longer and have some more stuff added, and also a new title.

As the new album shows you still source your inspiration from the early nineties seeds of Swedish death metal, are you open to other influences though within your creative sparks for songs or intently stay within its influence preferring to expand its particular barriers rather than look into new areas?

Well. Yeah. I have influences from all kinds of stuff… but mostly from the era between 1983-1995. Bands as Helloween, Accept, Iron Maiden, Slayer, Metallica and you name it. The list can be long… it wasn’t´ until 1990 and when I heard DM for the first time I was going on that path

How does the songwriting work within the band now with its stable line-up and creative members?

I make the music into a basic demo and when that´s done the rest add their ideas and changes and from that we rehearse the song into the finish mode. And if lyrics are missing they will be added.

Was the recording of Raging Death approached differently or an experience different to that of Tales From The Morgue and The Tomb Awaits?

Hmm…no… we almost did exactly the same in the recording progress…used a local studio for the drums and then my own studio for the rest and then Dan Swano did the mix/mastering so it was almost the same. Don’t change a winning concept someone told me! 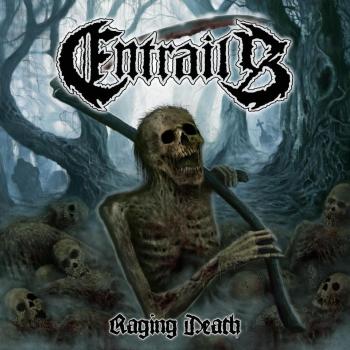 Is there an aspect or moment of Raging Death which gives you particular glow or tingle inside?

Yeah. There are some parts on each song that makes me in a better mood than others but´s only happens in my head. Like perfect changeovers or riffs that really bring your neck swing.

The album feels like it has a stronger snarl and impact in its production than previous releases. Would you agree and if so was it a determined intent or just naturally came about?

That’s cool if you think so… and mostly the album came out naturally so I didn’t have any spectacular or driven goals in it. Many things happens when I sit and record stuff… ideas pops up and I try ‘em out and if they sound good I use it…otherwise I don’t.

I always imagine that when recording songs in the studio ideas are spawned and ignited as a by-product by the process to be logged away for future use. Is this generally the case and if so any gems this time around which might be bred into your next confrontation?

This is your first album with Metal Blade Records, has this move given the album and its creation any particular strength or is it really now after release you will find the biggest impact being with the great label?

We worked with the album as we have used to do on the previous ones and Metal Blade didn’t have any specific words in how it should be, only do a great album and do it the Swedish way they said…so I guess the impact will be shown more after the release.

What comes next for Entrails?

In writing at the moment we have done one festival in Germany called Extremefest and after that we will have some vacation and I will sit down and make some new songs and also work with another project along with some friends… yeah it sounds confusing as others would have been on tour promoting their music by now.  But we can’t work in planning tours as the others have so many side projects in the band so we have to await offers and then work from that, but we are having some talks to eventually bring us on a small tour. But´s not confirmed yet.

Again thank you for chatting with us, any last thoughts or words you would like to share?

Well… at: www.facebook.com/entrails666  you can have 100% check on us as it’s there we update and confirm everything. Check it out…

And lastly you were inspired by the likes of Entombed, Dismember, Grave etc. but any bands around now which give you food for thought?

Hmmm…I keep my veins working by listening to the old stuff from 83-95 mostly but if I want to have my veins ice cold I would be listen to technical DM or metalcore or whatever the style is that has no passion and atmosphere to get my veins to work.