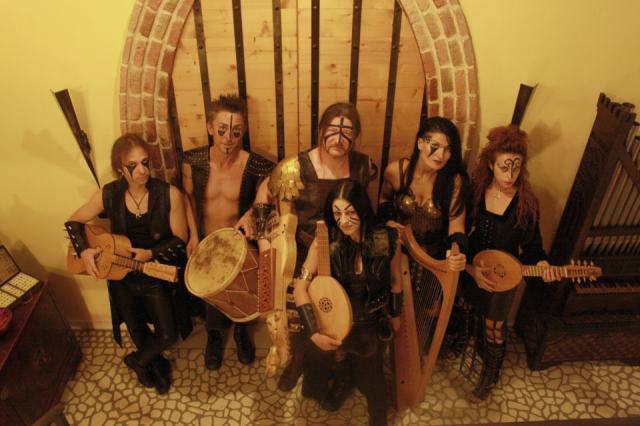 The name may be new to most but such the impressive voice and mighty of their album Ars Medioheavy, it is hard to imagine Italian folk metallers Diabula Rasa will be a secret for much longer. The ten track release is stunning; a scintillating multi-flavoured expanse of traditional and modern essences honed into an encounter which lights up the senses and leaves an eagerly potent depth of pleasure in its creative wake. The album is the best the genre has offered over the past year and it will take something special to replace its status across the rest of 2013.

Formed in 2000 as Tabula Rasa by Luca Veroli (guitarist, vocalist, bagpipe, songwriter/producer), the Lugo based band played traditional folk music which took its ideas and heart from medieval and traditional music. Their debut album, the acoustically instrumental Techno Gothica was released in 2005 before the band two years later changed its name to Diabula Rasa and re-invented its sound. Still seeded by their medieval and traditional experimentation the sextet brought in stirring metal elements as they continued to look to revive ancient music through instruments and sound seeded in the time whilst blending it with the presence of more modern ones. 2010 saw their second and self-titled album containing versions of tracks from their debut re-invented with the new metal intent released. It set the band to the fore of folk metal in their homeland which Ars Medioheavy will surely replicate across the world given the opportunity. Out on Moonlight Records, it is an irresistible instigator to fun, adventure, and expertly crafted excellence, sounds with a nostalgic breath from before our time and the energy and aggression of today.

The album has the passions secured by the opening instrumental Ghirondo alone, the vocal sweeps of harmonies which open up

song and senses simply delicious whilst the compelling bass lure of Samantha Bevoni skirted by the teasing touch of keys from Daniela Taglioni fire up intrigue and temptation another clutch of degrees. With the beats and concussive percussion of Moreno Boscherini adding a firm and appealing frame for the stringed skills of Stefano Clo and Sonia Nardelli to invigorate the already persuasive call with their melodic flames, submission to its lure is complete and cemented beyond doubt with the dance of traditional sounds and instruments making the final seduction.

Tsanich takes its lead from the incredible introduction, feeding off of its stance to raise bars and temperature to new raging pinnacles of invention and craft. A stirring and eagerly pressing charge of riffs locked in the arms of atmospheric keys lay out a potent temptation before the striking female vocals of either Taglioni or Bevoni, both contributing vocals upon the album but without any indication whose voice is whose, stand astride the sounds with teasing adventure and expressive quality. The excellent grouchy growls of Veroli add their additional roar behind the lead call before both girls combine for another warm caress of harmonies. With a chorus as anthemic and infectious as the body of the track, and the Italian delivered lyrics easy to join in with at that moment, the song has a swagger and mischief that is irresistible and a poise that takes it elegantly through the ear to energise thoughts and emotions, let alone limbs and voice.

The track gives the following songs a tall order to replicate with its stunning presence but both Cataclism and Congaudentes make light work of the challenge, the first flexing formidable sinews around another sun of vocal glory and evolving into a blaze of evocative aural expression and descriptive melodic colour whilst its successor is a boisterous and captivating play of metallic endeavour and folk festivity. The male and female vocals are scintillating within the walls of earnest keys and around the carousel of seductive strings, acoustic and electric, whilst the latter sirenesque call of the female vocal swoons is heavenly in its touch and presence. It is another feast of imagination and skilled craft which only lights further lustful ardour.

Through the passion exploiting heights of Madre de Deus, with its opening celestial wash of strings and soaring vocals a virulent temptress and evolving rapacious metal seeded hunger, the ambrosial Astarte, and the mouthwatering In Taberna, the album stirs up every corner of the senses and appetite whilst the glorious Vermell is manna from the melodic gods complete with expressive shadows, emotive atmospheres, and ravishing vocal beauty sending extra tingles down the spine of passion.

Stepping out clad in medieval suasion the sensational Maledicantur takes the listener back to simpler but openly energetic and passionate times with again a chorus which is impossibly contagious and enchanting in its simplicity. It is an exhilarative escapade to leave the listener on a high for the closing Ahi Amour and its emotional spellbinding and smouldering red skied sunset. It is an engrossing conclusion to an ingenious triumph from Diabula Rasa. Ars Medioheavy is an album which will feed all your needs and desires in a folk metal release and then some, an offering all should and will embrace with greed.