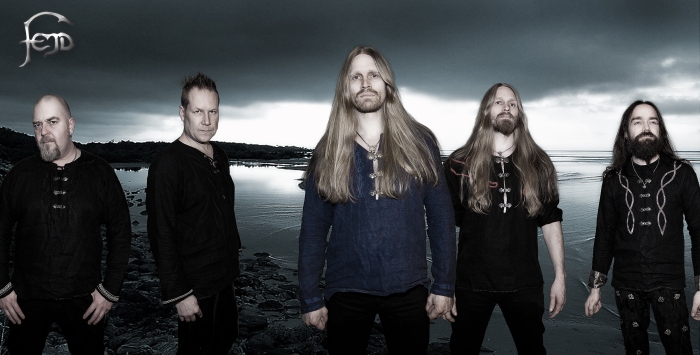 There is a charm about Nagelfar, the new and third album from Swedish folk metallers Fejd, which is impossible to ignore or not devour hungrily, an essence within release and band which is something a little different and more captivating than most equally gaited projects. Arguably the album does not offering anything jaw-droppingly different or new for the genre, and certainly for themselves, but has a heart and beauty which leaves the appetite for such sounds full and aroused passions eager.

Hailing from Lilla Edet/Trollhättan, Fejd was formed in 2001 from the union of folk music duo Rimmerfors and members of metal band Pathos. The band brings together the medieval folk music inspired side of the brothers Patrik (lead vocals, bouzouki, Swedish bagpipe, jew’s harp, hurdy-gurdie, cow antler, willow-pipe and recorder etc.) and Niklas Rimmerfors (vocals and moraharpa…an older version of the Hurdy-Gurdy) with the heavier breath and metallic rhythmic strengths of Lennart Specht (guitars and keyboard), Thomas Antonsson (bass), and Esko Salow (drums). It is a compelling fusion of authentic Nordic folk music, with its melodic language and sadness, with the muscular tones of heavy metal, a sound which has made an open mark through the previous releases of the band, Storm and Eifur, with its finest moment to date coming with Nagelfar.

from the intro with a strolling melodic and rhythmic dance. It is instantly captivating and has excited feet shuffling eagerly within the enthusiastic stomp whilst the excellent vocals with a slight rasp to their impressive and clean declaration, coax thoughts into creative play with their Swedish sung yet fully expressive lyrical persuasion. The sense of epic sceneries are evoked as the track continues to open its seductive arms, sinews rippling throughout its wholly engaging enterprise and invitation, adding to what is an impressive and invigorating start to the release.

The following Sigurd Ring continues in the same vein, the songs seemingly connected in the adventure of the intent and traditionally lit sounds. As the track plays, just as with its predecessor, the listener is taken into a busy vision of traditional and medieval times, lands and people vibrant in their lives with forceful energy enriching their experiences, much as the songs do for the senses. With the keys opening up progressive warmth mid-way through to move the track into another pasture of emotive incitement, there is again nothing less than full fascination as well as physical and emotional engagement with the excellent encounter.

The following title track starts with another melodic lure against a restrained but blistered wind before opening a confrontation of staring eye to eye vocals and striding sounds with more than a punk whisper to their intent. Into its full stride the evolving melodic air against strong metallic walls at times reminds of Finnish band Stam1na, its brewing folk grandeur wrapping around every aspect of the body as its rhythmic trigger stands as a constant commanding instigator to frame the again potent imagery seeded by the band.

The melodic romp of Den Skimrande leads the hand into another irresistible energetic polka of passion whilst Jordens Smycke, Fjärrskådaren, and Vindarnas Famn all offer their individual narratives to bring further imagination and invention to the album. Though both the first and the acoustically sculpted third of this trio of songs fail to ignite the same depth of thrills and passion as elsewhere on the album they are undeniably impressively crafted and make easy and pleasing companions. In between Fjärrskådaren is an intriguing slice of dramatic and inspiring creativity, its continually if gently evolving premise enriched with emotion and descriptive aural suggestion, a track bringing a metallic growl to a warm caress for a compelling constantly changing provocation of ideas and imagery.

The closing Häxfärd is an instrumental which leaves a lasting impression of the times and lands inspiring the release with charm lit energy. Though Nagelfar fails to find the heights and might of its first half in the closing stretch it is never less than compelling and pleasure spawning throughout with a fervour which is impossibly contagious. For folk metal with honest character and imaginative vibrancy, Fejd stands right to the fore.