Northern Ireland band Seneron is a confrontation which brawls with the ear, their attack loaded with honest and raw rock ‘n’ roll that only goes to make for a richly satisfying and energetic encounter. Their new EP Order Restored consists of four songs which stand face to face with the listener and treat them to a riot of big rhythms, caustic riffing, and melodic flaming. Though not without flaws, it is a release which marks the card for a band which is ripe with promise and accomplished enterprise.

From Derry, the quartet made a strong impact on the local underground scene with debut EP Well Driven, the release helping to ignite an eager and, though small, potent fan base for the band. Order Restored has the armoury and feisty charm to take that awareness to greater levels and already the release has caught the attention of US radio in Cleveland and Ohio. Recently signed to GlobMetal Promotions for a worldwide management deal, Seneron is poised to take their fusion of metal, rock, and punk to stronger recognition across 2013 as the release and tours around the UK and Ireland, as well as festivals, provokes more to succumb to their eventful fury.

Opening song Please Me is a deceptive beast initially, a teasing riff and bass probing wrapped in a rhythmic ticking leaving a sense 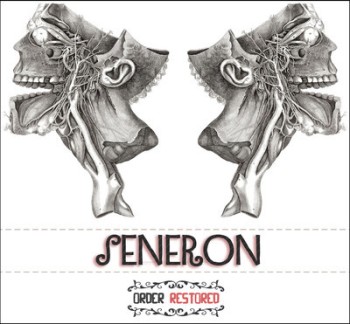 of confident safety before the massive beats and hungry riffs open up their rampage and put the record straight. It is a fire coursing riot, punk hooks and barbs lining the contagious hooks whilst the vocals of John Shields assisted by bassist Ivor Ferris rile up the senses along with the rapacious riffs. It is a song soaked in virulent infectiousness and inventive enterprise which whilst holding no surprises leaves appetite and passions exhausted with big grins on their greedy faces.

The following Stand Your Ground opens up with the vocals of Shields against a lone guitar, their union luring in the ear with a distinct if not for personal tastes a potent invitation. Vocally the guitarist takes a little getting used to and never really persuades though as on the opener in the height of an octane driven confrontation he has the perfect gruff abrasiveness for that style of attack. Here though his range and craft is limiting though as the song with exceptional guitar play from he and Chris Towe opens up a further furnace of energetic passion, his vocals find a healthier and rewarding home later into the track. The song itself musically is a riveting slice of grunge tinged metal, a hard rock ease adding to the appeal of the offering.

Dead Stare offers a similar start to its predecessor but is soon elevating its energy and intensity to gripping levels with crisp rhythms from drummer John Hamilton guiding the again impressive guitars and prowling bass into a formidable venture. The vocals again are fluctuating in their success but never scar or deflate the power of the song, its harsh and vigorous meld of rock and metal impossible to avoid finding great satisfaction in.

The closing Just A Kid is another which comes with strong familiarity and though it is fair to say there is nothing on the EP which has not been unearthed before, like the EP it is an insatiable storm of impressive craft and contagious enterprise. Across the release there is also a similarity to the songs and their construction though all equally have enough to be distinct in each other’s company whilst lighting up the ear with strong songwriting and subsequent stylish realisation.

The Order Restored EP is not going to set the rock world ablaze but should take Seneron to a stronger deserved recognition and hopefully opportunities to expand their promising sound even further.