Lower Lands is an alternative rock band from Lincoln in the UK, a quartet which has already earned good acclaim and interest but with the first single taken from their upcoming new EP Canvas, it is hard to imagine anything less than a surge of recognition and awareness soaking their presence, but then again music and its deserved rewards have never followed sense so we will see. Eat The Rich is a thrilling slice of punk spiced rock, a song with more than a sense of Reuben and Max Raptor to its persuasion and a melodic prowess combined within a track as impressive as it is infectious.

Released as a free download and accompanied by an excellent video, the song has already garnered strong praise and attention whilst raising the appetite for the June 10th released EP. It follows their previous Growing Pains EP which like the single was released through I Am Mighty Records. It was a release which earned approving reactions but if Eat The rich is any indication, Canvas will soon lift the band to new potent heights within UK rock.

A striking call lone guitar opens up the song’s beckoning though when the bass and drums enter, and with no fault of theirs, there is a 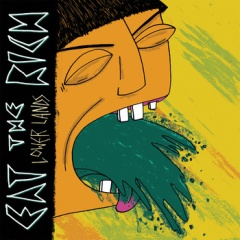 muddy breath which flattens the already in place intrigue. Thankfully it is for mere seconds as the song explodes into a fury of energy and caustic intensity. Into its stride the track settles into a delicious stroll of impressive vocals from Benji Inkley courted by a mix of infectious riffs and a teasing groove from Inkley and Paul Howells with the bass of Jacob Jarvis prowling moodily across their stance. Framed by the excellent rhythms of drummer Rob Purkiss and a blaze of great vocal harmonies, the song is virulently contagious, the snarling elements of the track in league with the tightly melodic and inventively hooked temptation elsewhere to seduce and secure full ardour for its exciting imagination.

If there is any niggle it is at times the song does not bite viciously enough, only teases that it will, but that is being as petty as saying your cup of coffee is one degree too cool on arrival. It is an outstanding song which only makes the wait for the EP impatient. If the likes of Reuben, Max Raptor, and Hundred Reasons make you tingle than Lower Lands and Eat The Rich will make you drool just as blissfully.