Listening to Onamacritus, the new EP from UK band Forgery Lit, the overriding feeling is that tingle you get when you feel like you are in on the beginning of something rather special, an awareness which not many others have had the taste of yet, though it would be a real shock if the trio from Bristol were not echoing around the senses of a great many in the very near future. Their four track release is simply scintillating, an inspired and imaginative temptation bred from distinct invention and unique aural mischief. Sounding like the tantalising offspring from an orgy between Blood Red Shoes, Breeders, and Penetration with the Au Pairs and Spinnerette offering their juices, and yet sounding something completely different, Forgery Lit is a fire waiting to happen, and their new release we suggest the irresistible spark.

Consisting of Ami Amp (vocals/drums), Gareth Jones (bass/backing vocals), and Niko Mar (guitar, backing vocals), the three friends from three different parts of the world (Greece, South east and South west of England), take inspirations from the likes of Juliette and the Licks, Mogwai, No Doubt, Nirvana and more, spicing up a sound which defies tagging and stands loudly distinctive to the band. As shown by the EP, it is a fusion of indie and rock which employs breaths from many other ventures for one new thrilling experience.

As soon as Dirty Life throws a mesh of sonic dust at the ear senses are opened up and appetite wide eyed in anticipation. It is a 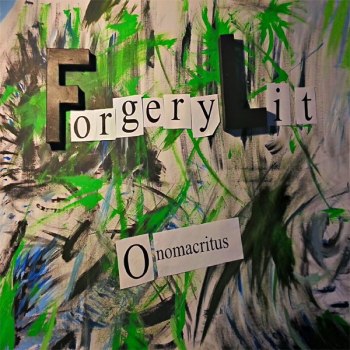 brief scrub soon replaced by a teasing groove and strolling rhythms hand in hand with a swagger lit bassline. The vocals of Amp confidently coax and seduce with slight menace and total persuasion adding to the provocative temptation which subsequently reacts to the listener’s submission with a sonic crescendo of squalling greedy energy before going through the whole incendiary lure again to cement the deal. The drift into blues soaked tempting within a bedlamic ambience makes for an unexpected and exciting aside whilst the returning earnest tempest confirms the already incited ardour. The lead track/video from the release it makes a potent introduction to the band.

She Said has a reggae whispering walk to its opening embrace with the vocals and rhythmic enticement of Amp waving a beckoning finger at the ear before bass and guitar light up the scenic embrace with feisty passion and evocative colour. A more gentle engagement than the previous song it still grabs thoughts and emotions by the scruff of the neck and leads them into an excitable dance of discord teasing melodic blistering crafted with a post punk enterprise. It has an uncompromising invention which is hypnotic in its invigorating ingenuity but is never afraid to drench it in a surge of heart sculpted energy bleeding ferocity.

With just two songs the EP has won its case but with the remaining pair of Bicycle and Fairweather, there is nothing less than more eclectic weaves and rapture igniting quality to devour and drive those thoughts and expectations that Forgery Lit is poised to become a new force in UK rock. The first of the two stands eye to eye with the senses, a riff guided groove searing the synapses to enslave their focus before beats cage their escape and Amp lays out her narrative with a seductive wantonness.  It is with the expulsion of sky bound sonic flames with acidic melodic fuel and a deliciously broody bass assistance that the track finds another plateau of excellence. X-Ray Spex meets Karn8, it is a sizzling and beguiling confrontation and the best track on the EP, a creative devilment which says as much about the immense invention as the other three songs together.

The closing Fairweather is a slowly smouldering caress which is as gentle as it is caustic in its predatory surges, a final piece of passionate and expansive excellence setting the band up as one of the most exciting and promising bands of recent years. Recorded at AudioBeach Studios with Forbes Coleman, Onamacritus is one release all need to invite into their ears, your hearts it will find by itself soon after.