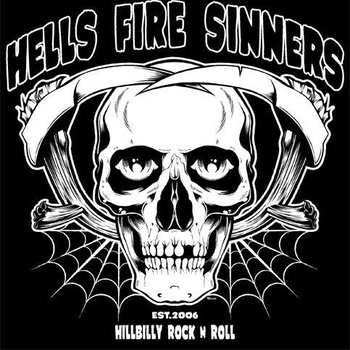 As rampant and hungry as a single Katie Price (non Brits feel lucky not knowing who we mean), Confessions Of the Damned from hillbilly rioters Hells Fire Sinners is one of those bruisings you just cannot get enough of. Consisting of ten tracks which refuse to take a step back from vigorously seizing and rampaging across ear and senses, the album is a thrilling and devious instigator of and conspirator with the passions.

The Columbus based Hells Fire Sinners began in 2006 going through different members alongside the constant, vocalist and guitarist Alan Dude. Bringing together a blaze of rockabilly, punk, country rock and plenty more psychotic teased flavours, the band from a first show which according to their bio was in a ‘a piss smelled, burned out basement on the OSU campus’, have tirelessly exhausted the east coast with their energetic live show, playing for anyone who will listen. It has been a steady unrelenting ascent which finds a pinnacle with the excellent Confessions Of the Damned.

The Psycho A-Go-Go Records re-released storm begins with the outstanding Ninety Nine, a track which leaps for the throat gripping tightly whilst screaming through the ear with abrasive riffs, crisp rhythms, and the excellent expressive slightly scorched vocals of Dude, who is also not averse to throwing a great guttural squall into his assault. It is a direct and uncomplicated confrontation with a great emerging bass groove and fiery riffing all wrapped in a contagion which refuses to be told no as it takes feet and voice on a recruitment drive into its scintillating brawl. The song provides one of those starts to a release where you instantly think it is going to struggle to follow it up without slipping in standards such its impressive first engagement, but no such worries here as of A Little Gone A Little Crazy and Muddy Water Murder lay out their feisty temptation.

The first of the two is a cowpunk lilted stroll with delicious twang to the vocals and a greedy appetite to the roaming guitar enterprise both accompanied by the bass with its flavoursome prowl adding extra depth to the brief but again easily recruiting suasion, whilst the second reaps the essences of heavy metal to drive its adrenaline soaked rock ‘n’ roll for an intensive charge of high octane rockabilly. To be honest you can cast many spices as references to the song, all valid and all just showing the tasty tempest of enterprise it is.

As it continues to chew on ear and thoughts with attitude and at times middle finger raised belligerence, the release leaves stronger epidemically laced hooks in the passions to cement the need to regularly return to its raucous embrace. Every track spreads their irresistible toxin upon those barbs to ensure full subservience but of course there are some with more potency as with Psycho and Almighty Dollar. The first of the pair like the opener has an uncompromising intent to rile up the senses and take them on a dirt track ride of mischief and sinew clad devilry. With a murderous breath to its air and a sense of ruin coating its fingertips, the song stomps and swaggers to spark the fullest satisfaction and hunger for its psychobilly rustling. Following this glorious moment the second of the two puts on its country boots to open up a bottle of liquor fuelled riffs and melodic flaming which simply inspires another blaze of greed.

Thick Of It walks the highest plateaus of the album too, it’s virulently catchy hook and searing sonic riffs a spicery of enterprise and invention which rages with veins of passion and is only surpassed by the opener and closing song Zombie Killer. The last track assaults the ear with a muscular hold whilst riffs assisted by talons of rhythmic rabidity rampage, though the song has the delicious skill of reining it all in and then unleashing the barbaric attack in spasms. It is an excellent track which perfectly ends an equally impressive album, its psychobilly core generously enhanced with some blues seeded imagination and blustery intensity for a scintillating tempest.

Hells Fire Sinners is a name which suits the band and their creative ferocity well whilst Confessions Of the Damned is the natural title for a collection of songs you can imagine the devil having a horn or two in. A must have release for all fans of rapacious rock ‘n’ roll.