Exhausting and demanding, Profane the new album from French extreme metallers Svart Crown is also a rewardingly riveting confrontation, a release which feeds on fears and anxiety to create an intensive ravenous expanse of sound extinguishing light and escape. It is a sonic predator which devours and corrupts thoughts and emotions but equally sends them into a realm of provoked and fired up imagination.

Formed in 2005 by vocalist/guitarist J.B Le Bail, Svart Crown make their first impacting mark with the EP Bloody Crown and then debut album Ages of Decay of 2008, but it was its acclaimed successor, Witnessing the Fall two years later which ignited a strong hunger and recognition for the band. Bleak and rapacious the album made a striking inventive mark within extreme metal like very few others, soon backed up by an onslaught of live shows  ever since. New album Profane immerses the listener in a sonic desolation which seizes every pore and thought through skilled and voracious malevolence, its theme of the sickness of humanity reeking and breeding corrosive unrelenting caustic enterprise through music. It continues the sounds already discovered on the previous album but sets them out with a fresh breath and new adventurous declaration which leaves full satisfaction and fascination.

With a line-up completed by guitarist C.Flandrois, bassist L.Veyssiere, and drummer N.Muller, Svart Crown open up their Listenable 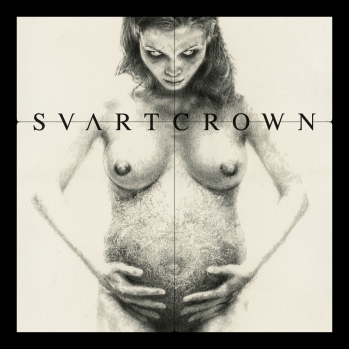 Records released album with the insidious charm of Manifestatio Symptoms. The track, from setting a sinister ambience, stretches its sinews through a resonating atmosphere of sonic temptation which charges with eagerness through the ear, its brief instrumental presence impacting whilst opening up the senses for the character laden onslaught of Genesis Architect. Lurching over the ear with muscular rhythms and guitar scorching wrapped in an abrasive embrace, the second track proceeds to intimidate and test with a wealth of toxic sound and equally intrusive invention all guided by the guttural yet enterprising vocals of Bail. As with most of the tracks there is nothing which openly lingers within the song, a hook or groove which you can hang your memory on to but the whole experience is a long lasting and compelling confrontation which stays deep within far beyond the passing on of the sonic furnace.

The following blackened squall of Intern.Virus.Human and the mutually corrosive bedlam which comes in the shape of In Utero : A place of Hatred and Threat continue the impressive start, the first admittedly not quite touching the same heights of the opener but the second setting its own plateau of a maelstrom, deranged rhythms and sonic ingenuity flailing the ear for a rich pleasure. The album never settles into an expected rhythm or course of provocation but is constantly challenging and igniting the psyche and emotions with uncompromising vehemence as in the previous pair of songs and the likes of the lumbering Until the last Breath as well as the rampaging title track, both unleashing their passion drenched spite in a diverse and individual uncomfortable furies.

The album truly reaches its greatest height in its closing stretch of sonic antagonism where songs like the primal instrumental Venomous Ritual, a track with a virulent toxicant seeded in the great bass snarl and repetitious riffing prowling the greedy tempest of sound, and the bestial Ascetic Purification which employs a scathing abrase of hardcore within its savage distortion, rip any remaining thought of safety from the listener.

Closing track Revelatio : Down here Stillborn emerges immediately from the grip of Ascetic Purification to push further the rabid sonic persuasion and invention violence rifling ear and senses. It is a final and arguably the most devastating statement of quality of album and band, a track where grooves and melodic enticement carry the same poison as the brutal rhythms and barbaric riffing. It is an outstanding conclusion to an album which stands on the frontline of recent extreme metal offerings. It carries the flag for invention, passion, and imagination and though you can also say it might fail to be as memorable as other less deep releases, it is easy to hear which is the most rewarding.