From the first resonating note of Collegium, the album leaves a deep and evocative touch on thoughts and senses which in many ways is hard to express in words. It is an experience which has to be felt in person to truly appreciate the resonating beauty and provocative touch, anything we say here mere whispered guidance to its potent presence. The first official full length release by The Fawn, an artistic collective led by Nathan Baumann, the album explores the realms of thought and emotion whilst easily igniting those of the listener.

The new album follows a quartet of EPs which with a limited release has bred an intense and dedicated fanbase for the project around Switzerland. Began by Baumann in 2011,The Fawn is a collaboration of the most imaginative musicians, plastic artists and technicians in the country all providing their invention for free alongside Baumann for a project of true DIY spirit. Featuring the talents of members of The Ocean, Coilguns, Shelving, Rectangle, Derrick, and many more, as well as other artists from other medium than music, the experimental and impacting release is a series of small soundscapes combining for one sophisticated experience working on many potent levels.

Collegium was started in the January of 2012 in the church of St- Imier, his native town in Switzerland. Given the opportunity to 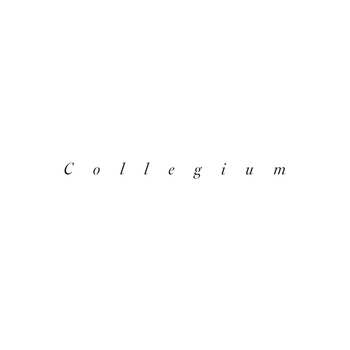 have its distinct voice as a canvas for the recording and production for one week, Baumann with producer/songwriter Louis Jucker (The Ocean, Coilguns, Kunz) and sound engineer Christoph Noth, chose to employ a new conceptual approach of recording with the natural reverberation and throat of the building leading the composing and mixing process. Songs were written and explored only once within the walls of the XIth century church with its touch and voice bringing guidance and rich impressions on the recordings and album. For the recording a selection of acoustic instruments were used: piano, 6 and 12 strings guitars, cello, tuba, percussions, drums, as well as the original organ of the building amongst many other factors brought into the intricate and intently crafted preparation to make full use of the opportunity, imagination at large, and the acoustic beauty of the church itself.

From the very first track The Arch, the qualities which ignited the invention and creativity provide a wind through the ear. A melodic drone of organ offers a persistent enticing engagement with a rasp to its invitation whilst leading the listener unreservedly into the arms of the acoustic caress of guitar. The compelling resonate purr of the formidable instrument subsequently lends its exhaustive breath across the whole length of the track to soundtrack the seductive vocals of Baumann and the continuing creative breeze of guitar. It is an imposing but enthralling sensation, an emotively resonating experience which leaves a rich imprint upon thoughts and senses long.

The following Paper Cuts features, as in two other songs, the distinct voice of Jucker; his expressive earnest tones an acidic pleasure within the elegant acoustically caressing narrative crafted by the guitars for an emotional wash. It is a fascinating incitement soon equalled by Two Lines with Baumann returning to coax the deepest heart out of the piece. Already within three songs the echo of the building is a thrilling canvas for the sounds and songs to reach their emotive pinnacles and in the third song with the entry of the cello, it finds the most powerful declaration yet.

The mesmeric Queen of Rain is one of the major highlights of the album, its warm and refreshing waltz through the ear providing a summer walk in an imaginative aural climate of invention and expression whilst Asylum with Jucker returning to lay his individual vocal temptation, is a passion lined conviction of open emotions. Though not every track sparks the same depth of passion and greed as others, Collegium is an album which allows no moment to be wasted, the wave like flow of songs always impacting and bringing strong persuasion before the ear.

Across the likes of Good Friends, the equally haunting and entrancing Nocturne, and the warmly alluring Summerbreeze, the album continues to impress and invite stronger emotion, the tail end of the release its most enriching, whilst closing song Dive uses the building framing its ingenuity, as another instrument of descriptive colour and emotional testament most strongly on the Hummus Records  released album.

Also bringing in to the collective the abilities and invention of two Swiss designers, Gaspard de la Montagne (Spitzhorn) and Jerôme Burgener (Structo) for the album artwork, and Swiss plastic artist Carlo Clopath for photography, The Fawn is a project which is compelling, an imagination of folk pop, to simplify its stance, which deserves to have the chance to bring its undoubted impact before every emotive heart.

Like Loading...
‹ No fear just imaginative provocation: an interview with Dale Crover of Melvins
M-Pire Of Evil – Crucified ›