Parading The Dirt: an interview with Spunk Volcano of Dirt Box Disco

The recent release of their second album Peoplemadeofpaper, confirmed what a great many already new, that UK punks Dirt Box Disco is the future of punk n roll. Following up their equally impressive debut Legends, the Burton on Trent quintet has grown into a formidable, mischievous, and thrilling conspiracy to have fun for fans and music in general. Fresh from their appearance on the recent Misfits UK tour, we grabbed guitarist Spunk Volcano to find out what we could about the band and their album and that tour.

Hi Spunk and welcome to the site, cheers for taking time to chat with us.

Hard to believe I know but for those still unaware of Dirt Box Disco, can you firstly introduce the band and tell us about how it all began?

I think dirtbox was started when someone was sick and tried to make little figures out of the sick mess then a witch put a spell on it and we came to life.

What is the musical history of the members before the band?

I don’t have any history. I think Deadbeatz Chris was in Ken Dodds backing group in the 70s and Weab played banjo on a few Kylie minge records. Danny Fingers writes dirty music for sex films. Fazzo used to play for Rod Jane and Freddy from Rainbow when they toured live. Crazy times.

Musically and visually you are larger than life, putting fun and urgency back into musical rampage, but truthfully you are quiet retiring types right?

Yes we are very quiet and sometimes so quiet we whisper and fall asleep. Like fish.

Since those early days as a band how would you say you have evolved musically up to the new album Peoplemadeofpaper? 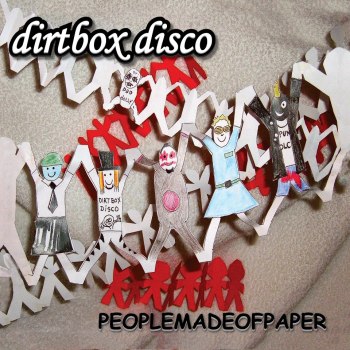 I think it’s the same. We just play. No plan. No evolution. We try a tune, if we like it, it stays. The thing that’s changed is more people get to hear ‘em.

Has your intent and purpose within the band changed as you continue to grow towards being one of the major names of UK punk rock?

Naaaaa. Still same. Make a good cd; throw yourself into your shows 101%, OR DON’T BOTHER. People don’t want to come to a show that’s boring, they wanna smile and sing and feel part of something!!!

As mentioned you are about to release your excellent new album Peoplemadeofpaper. Having just come off a number of dates with Misfits and Goldblade does this feel like it does for us, like a moment where things are at that edge of exploding into greater maelstroms of awareness?

Dunno it could be trapped wind haha. It’s hard to judge other peoples opinion unless it’s written down for u to see. If people are out there saying good stuff then great.

In our review of Peoplemadeofpaper, we said the album was not striking on from your previous gem Legends but was a sister slab of mischievousness in quality and intent; a fair comment?

Yes, it’s Dirtbox!!! We’re never going to be ground-breaking but we will be consistent and enjoy every minute of it.

Previous release Legends is an album which thrust you into the greater recognition and passions of a great many, did its success made you look at the new album differently when writing and recording it?

Difficult second album, more of the same, dunno what you do? We just jammed it out, aimed for the singsong jugular and kicked off! Nothing different as far as I’m aware, but I am special ….

Did you learn anything from the previous album and its creation which you used to greater effect for Peoplemadeofpaper?

Make sure you can tell what people are singing. People like singing in the car. Make the album sleeve colourful. Swear words are naughty. Dirtbox is too rude for kids. Kids like rude things.

How does the songwriting work within the band and what inspires your ideas and songs? Any substance to the rumour it is alcohol and lusty ladies? 😉

It works like this, I write a song. They say if they like it, yes or no.  We crack on and make it superior. Main inspiration is being a nutter. Just close your eyes, it’s all there ……

Is there any particular track or moment on the new album which makes you a little prouder than you are for the rest of the release?

“I wanna kiss or finger fuck you” from Top Shelf. A Very rude thing to put in a song but it captures the moment of confused teenage hormonal stress, I couldn’t explain any other way. Minge.

As mentioned earlier you have just played a number of dates with the Misfits, how did that come about?

The Misfits rang us up and said please come and open up our shows ‘cos we’re your biggest fans and we’ve got all your records and we’ve got Dirtbox tattoos and posters all over our houses and we sing your songs as we go to bed and we love you so much it makes us cry. That’s true, that’s what happened.

Is this your biggest experience live to date in regards to consistent crowd size and fervour as well as bringing new fans to the cause?

Yes it is, and it was ace!! The Misfits were great to us and Goldblade too. We had a top tour.

How did the legends themselves feel about being blown away each night by your good selves? 😉

Didn’t happen, they are legendary. Each to their own opinion on that one but we did ok.

You are a band which obviously is always looking forward and not back but any sense of an anti-climax once the Misfits shows were over?

It was terrible when it finished. We all started crying, we were devastated. We tried to kill ourselves in the dressing room by drinking cilit bang!!!! Then I got taken away and told to write album 3 asap!!!

Talking of live shows, your songs all have an anthemic irresistibility which ensures each has a passionate following as fan favourites. Therefore you will eventfully disappoint some at shows by omitting their personal passions, do you at all feel guilty? Ha-ha

In our recent interview with Charlie Harper we talked about whether bands today underestimate their fans adventure so avoid or are scared of trying new veins and directions in their music. Dirt Box Disco is a band which does stretch its self within that as mentioned anthemic skill it has; this is an important aspect for you as musicians as well  one suspects.

There is no other direction for Dirt Box Disco. It is punk rock n roll!! Dirt box or die! Like it lump it.

You gig constantly, have a hunger to perform and give a good time to all. Has it become more difficult to keep up your live presence over the past years or are bands that do say it has just making excuses for their lack of drive do you think? 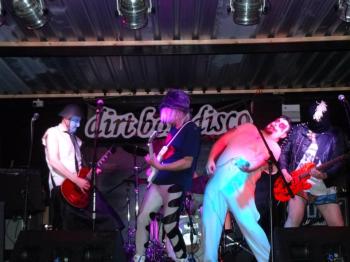 We love playing live. It’s why we’re here. We try to do as much as possible. It’s always been about us and the crowd coming together for a fantastic super singsong!!!

You are not a band which is seemingly demandingly political with your music certainly compared to other genre bands, but there is a middle finger attitude which can rival any if need be within your music. Are there times you feel like putting the world to rights with a stronger voice musically?

Other bands do the political stuff much better than we could. There are bits and bobs and the odd song but we’re more about a big general fuck this, let’s have some fun!!!

What is next from and for the lustful deviancy of Dirt Box Disco?

Album 3 next April, got a Xmas song in me pocket, loads of great shows. That’s quite good.

Again a big thanks for chatting with us, any last thoughts, words, or antagonism you would like to leave us?

People should go out to watch bands live to get the full effect. Watching them on YouTube is bollocks and doesn’t give u the fair result.

..And finally tell us a dirty secret which emerged on the Misfits tour from yourselves or the headliners.