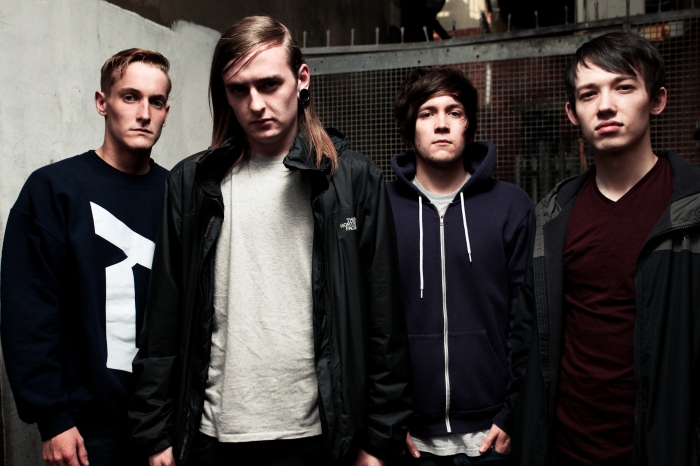 Whether UK metalcore annihilators Red XIII have realised the immense promise which brewed within their debut album of 2010 with their new EP Perceptions is questionable but certainly the enthralling six track release is going in the right direction whilst easily placing the Blackpool quartet as already one of the more original and refreshing emerging breaths, or should that be roar, in the genre not only in Europe but possibly worldwide.

Riding roughshod over audiences since 2006 with their uncompromising yet adventurous sound, Red XIII has earned intense attention from fans and acclaimed responses from the media through the aforementioned album Better Safe Than Sorry, as well as impressive passionate performances alongside the likes of Sylosis, Liferuiner, Heights, Betraying The Martyrs, Texas In July, Heights, and The Arusha Accord to name just a handful. The new release shows the band at its most destructive and creative to date and though the leap has not been as potent as anticipation imagined going by their already high standards it is a big step forward for the band with Perceptions easily standing out amongst similarly engineered sounds in the genre and a great many metal releases in general.

wind loaded to a brooding bass and twisted riffs accompaniment. Installing a groove which whips head and passions from their slumber, the track unleashes rhythms from drummer Tim Clark which cage, poke, and explore the senses the further into the song you go whilst the bass of Ivan Coulburn offers a rapacious presence from first note to last, its presence a predatory link between the drum incitement, the flames sonic class of guitarist Jason Dean and the excellently continually shifting vocals of Sean Donovan. His delivery stalks a range of squalling provocation and malice dripping growls to ride the extensive grooves and invention of Dean like a tempestuous beast.  The fact that the song and release as a whole does not always push the envelope and limits of its most potent elements is really the only ‘flaw’ you can lay at their doors, the track walking the lip of full adoration and addiction causing might but never quite taking that last leap of faith. Despite that the opener is an immense introduction which the rest of the songs only qualify in their individual and richly pleasing stances.

The following General Disarray takes a mere second to bombard the ear with another delicious groove and even hungrier rhythms within an earnest and rebellious intensity. Into its stride the track is a storm of ferocious rhythmic punishment and persistently encroaching and thrillingly evolving guitar abrasion built on impressive sonic invention and acidic melodic persuasion. As before the vocals of Donovan come in multi-brewed venom, at times almost touching a clean gait whilst cruising the full gamut of scolding malevolence. It is a monster of a song with a craft which leaves one magnetised during and after its confrontation.

Trainwreck explores the senses with a sonic web of enterprise before allowing a ridiculously addictive bass lure to escape its flame and the vocals to score the now mesmerised senses with primal spite. It takes no time though for the track to unleash an exhausting corrosive breath and unrelenting caustic hardcore rough handedness. With a gait as unbridled in its assault as the unique vindictiveness the track, it taunts and erodes the defences with energy every bit as violent as a derailment but with more purposeful and direct targets. Without reaching the heights of its predecessors the track easily leaves a hunger for more of the abusive thrills offered whilst suggesting there is still much more to come from the band, again a comment which can be levelled at Perceptions as a whole.

Next track The Bitch grabs top honours on the EP, its emergence from a dawning raptorial charge and bone splintering rhythmic beckoning into a tsunami of deeply coloured sonic endeavour and rabid intensity guided by the heavy fisted great vocals of Donovan and matching bass snarl exceptional. In some ways the track seems unsure of its direction yet everything it entwines around its impressive body and the ventures brutally explored only lead the passions to erupt with greed and want for more of its unpredictable foraging of the senses and emotions, especially its progressively sculpted and wholly seductive climax.

The final pair of songs, Illuminate and Exploding Pet, expose the listener to more creative fire in songwriting and its unreserved barbarous realisation, the first of the two a fusion of hardcore and metal savagery carved into a compelling slab of excellence almost as equal to the previously mentioned gem and the closing song which lives up to its outstanding title by whipping the senses with industrial strength lashes of barbed riffs and similarly vicious rhythmic intrusion. It is a mighty conclusion to a formidable and wholly impressive release. Ok Perceptions still loudly hints that the band has some way to go before unearthing their full potential but it still stands above most other metalcore releases with ease and ignites a sure anticipation of a real classic in their future.