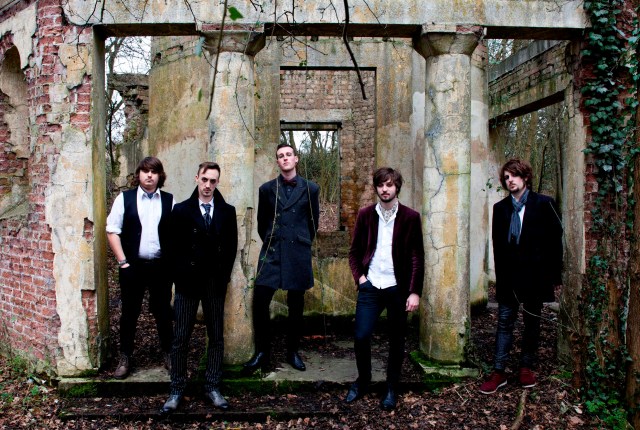 Rampant UK quintet drop their tantalising debut album ‘Second Coming’ to the nation on Monday 29th July 2013, available through all digital stores.
With glowing comparisons to the likes of Eighties Matchbox B-Line Disaster, Pulled Apart By Horses and QOTSA, The Dropper’s Neck spring from the traps with enticing hooks and riffs, darkly chaotic energy and raw intensity. The rising Southern noiseniks are quickly moving through the ranks, as they launch out of the underground and aim right for the jugular of the UK scene, loaded with their stunning new album ‘Second Coming’.
Born in and around Essex, The Dropper’s Neck were formed in the summer of 2011 and feature Lloyd Mathews on Lead Vocals, Chris Blake handling Lead Guitar, George Barrows serving up Rhythm Guitar, Danny Keene on Drums and Jack Turner steadying the ship on Bass Guitar. All five members have the same ambition and drive: to make loud, raw and noisy rock music that stands apart from that of other bands on the scene; they have certainly accomplished their goal.
The fast moving five-some soon began to attack their local scene by playing a cluster of successful support slots throughout the area, building a name for themselves by delivering a flurry of high energy live shows throughout London and the South. The gory rocksters continued to raise their stock with the national release of their debut EP during the early part of 2012, which garnered extensive praise and widespread underground recognition.
The band soon amassed enough solid material for a debut album and headed to the studio with esteemed producer Paul Tipler (Placebo, Idlewild & Eighties Matchbox B-Line Disaster) at the helm. The end result is the band’s debut album ‘Second Coming’ and it’s a real scorcher. From the unbridled garage punk texturing of the opening and album title track ‘Second Coming’, to the energetic groove of their forthcoming single ‘Darker Waters’, to the fantastically chaotic and aptly named ‘Abrasive’, right through to the climax closer ‘Save Me From Myself’, The Dropper’s Neck have sculptured an extremely striking debut album that boasts nine killer cuts of High Octane raucous rock merged with tinges of physcobilly punk; in doing so, they have fashioned a record brimming with raw power, force, and true potential.