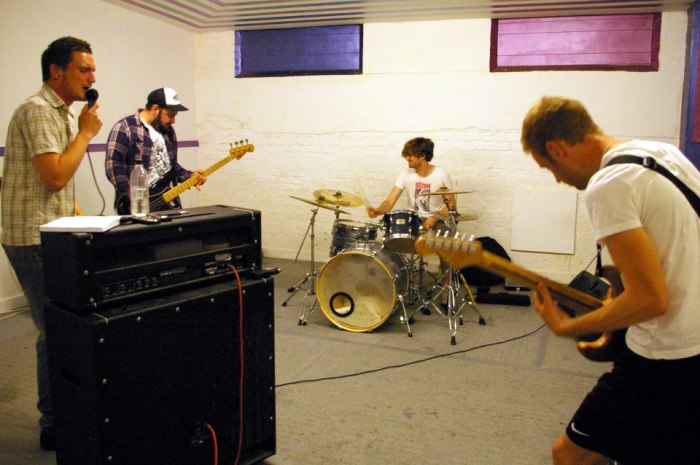 Having been more than impressed by his previous projects, their distinctly different sounds lighting some potent passion, vocalist James Scott-Howes has stepped forward again with another unexpected but equally intriguing project in the shape of The New Sheriff. From the soulful mischievous  hip hop enterprise of Great Imitation through the startling experimental haunting adventures of Shrikes, Scott-Howes and his lyrical prowess has engaged and pushed the envelope of himself and listener but the post hardcore squalling intensity of The New Sheriff may just be his most disruptive and challenging moment yet. The Leicester based band is not all about him though, the frontman joining the accomplished and imaginative skills of guitarist Tom Whitmore, bassist Ollie Jones, and drummer Mark Abbott for a combined force which ensures attention is all theirs whilst they bruise and intrigue thoughts and senses.

With influences taken from the likes of Touche Amore, Pianos Become The Teeth, Defeater, La Dispute, At The Drive-In, and Refused, 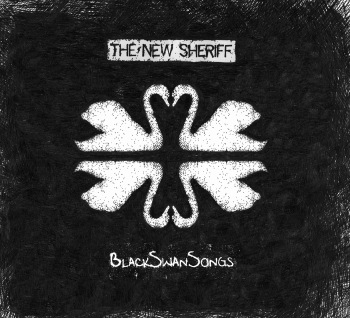 the quartet create they own abrasive confrontation which takes its debut upon the BlackSwanSongs EP. The four track tempest of emotion and sonic spite is a raw and uncomfortable listen but a richly compelling and provocative one, and in no mood to take it easy on the ear from its very first tempestuous breath. Opening track Pinky Swear approaches with strokes of jangling guitar before big boned rhythms thump out their intentions alongside the dark growling bass. The combination has no problem in sparking the appetite as they set the platform for the caustic scowling attack of Scott-Howes to work senses and thoughts. As expected his lyrical stance and stylish script is magnetic but his delivery initially throwing assumptions off balance. Being used to his rapping and word crafted explorations the acidic and abrasive vocals shock and take a while to get used to but soon make the strongest persuasion. The song itself swipes and intimidates the ear yet within its full intensity, the sonic colours of the guitar casting a rich tale upon the muscular satisfying canvas.

Eternity Means Eternally steps forward next, well barges forth, with again a forceful almost rabid hunger. There is a punk grazing to the provocation especially in the group chorus which breaks out whilst the grizzled bass voice is a ravenous predator within the welcomingly wearing assault of guitar and vocals. The drums of Abbott cage and pummel the listener with excellent maliciousness especially entering its climax, and overall though the track is firmly seeded in post hardcore there is more than a whisper of the punk hardcore assault of Amen to its threatening lure.

The following Bitter Magicians restrains some of its intensity for an evocative weave of expressive guitar sculpting and less confrontational but more potent vocal suasion, the hard spoken delivery of Scott-Howes offering more clarity which certainly has essences of his previous band without losing the already in place spite or venom. As with all the songs there is no escaping or hiding from the power and intensity of the band which the EP closer In Heliotrope We Burn equally ensures. Moving from where its predecessor left off, the slower clear tones of sound and voice welcomes the ear into the impending storm of corrosive emotion and sonic spleen bred creativity, the track an inciting finale to a strong and impressive first encounter with The New Sheriff.

BlackSwanSongs suggests the band is still in the process of evolving and defining its sound and unique voice to stand out amongst a torrent of emerging post hardcore band but it is rife with promise which ignites real anticipation for their future creativity…a band to keep a close eye on indeed.