Thirteen Shots – Tales That Start With A Whisper

After the success of their excellent debut album Vaudeville just over a year ago, UK horror punk n rollers Thirteen Shots teased the appetite further with songs like Zombies From The USSR, a track which made up one of their contributions to a split release with fellow raisers of the dead, Trioxin Cherry and Raizing Hell. Little did it and fellow song Get In My Crypt fully reveal was the step forward and extra adventure the Birmingham quartet had explored for their outstanding new album Tales That Start With A Whisper. Employing even richer flames of numerous genres and decades, the nine track release is a riot to ignite the senses and passions, a seemingly uncomplicated yet fully involved feast of dirty decaying invigorating rock n roll.

Formed in 2011 by vocalist Johnny Rose and guitarist Joe Public, long-time friends who moved from the hard rock sound they had earned a good name for into bringing a unique form of horror punk n roll, Thirteen Shots immediately drew attention with the release of debut single Danzig in the September of their first year. Completed by guitarist Izzy, bassist GMT, and drummer Chelsea, the band had over 300 downloads within a week of the release of the single. As the year rested in its grave and the new broke free, the five-piece entered the studio to record their first album, Vaudeville which was self-released on April Fool’s Day 2012. With a subsequent re-release via Psycho-go-go Records, the album drew great and eager acclaim and set the band up for two full tours across the UK. With the band also having gnawed and infested audiences alongside the likes of Demented are Go, The Peacocks, Rezurex, Howling Wolfmen, Graveyard Johnnys and more, across the years and finding great appetite for their sounds not only from fans but people such as Michale Graves through that first single, Thirteen Shots stand at the gate to the widest recognition within all shadowed corners of rock n roll, the new album promising to be the key to swing the iron clad entrance wide open.

As their previous releases, Tales That Start With A Whisper finds the band infusing elements and textures of sixties rock n roll, 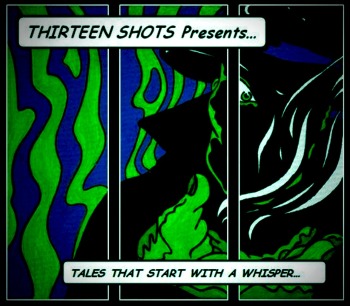 garage blues, and horror punk with plenty of spice from psychobilly, punk, and rock, but this time it is all sculpted into brawling encounters which are more rounded, sure of their intent, and in league with each other whatever their individual stance in attitude and style. Whereas Vaudeville at times lost its way and has an undulating effect, its successor is one big eclectic bang on the senses; simply the band has come of age with a maturity honed into their sound for one insatiable and perpetually rewarding treat.

Opener Death Jam 2000 steps forward with a Jerry Lee Lewis like fired up hungry rockabilly call, with blues driven guitars flaming up the air and the vocals of Johnny snapping at the ear. With punchy rhythms caging the senses the song romps across the senses for the perfect start, simple, dramatic, and inciting not forgetting exciting. It is an easy introduction to the release which hands over to the outstanding Zombies From The USSR, an anthemic lure which never loses its potency and success no matter how many times you face its charge. With an intimidating riff driven gait and challenging breath, the song prowls and claws at the emotions, its crowding unrelenting stalking of the ear a restrained but deceptively quick and lethal hook to match the raptorial groove and vocal recruitment; it is the perfect soundtrack to any George Romero or modern zombie film. Having heard the song enough times to recall its declaration and words before remembering the names of all family member there is still the impossible to resist itch to hear the song at least twice before moving on to the rest of the album such its addictive hold.

The excellent Bewitched comes next, its scuzzy breath a fire within the garage punk unpolished embrace of the belligerent sonic confrontation and rhythmic caging. The bass of GMT is an exceptional temptation, its throaty grizzled snarl a contagious predator to menace and pushed the shadows of the song forth from behind the burning flames of the guitars. It is not the most infectious of the songs on the album but still consumes the passions with unbridled vehemence leaving Psycho Jukebox to work on the addiction side of things. Starting off with an Eddie Cochran like beckoning, the song then merges ska carved strokes and surf rock persuasion for a ridiculously catchy persuasion whilst its chorus is where the storm has its wildest greedy moments. Again bass and drums steal their share of the limelight with skilled mischief and again a different tone to their invention whilst the guitars simply sizzle with enterprise and swagger.

Get In My Crypt is another fiery garage punk rampage that sparks full participation and ardour, everything from guitar to vocals and harmonies to rhythms conspiring to leave an exhausted rapture clinging to its refreshing corpse whilst Nekro Sexual is a salacious and provoking slice of dirty devilry, a b-movie driven suggestiveness with a chorus of ‘Stomp On my Balls’ which defies anyone not to shout it persistently during and long after its devilment.

The album closes firstly with the brilliant title track, a groove laden addict making beats of a track writhing in classic/glam rock misbehaviour and horror rock roguishness not forgetting hook loaded grooves which would do the Buzzcocks proud. It is followed by two live tracks, Dead Girls Don’t Scream and This Looks Like A Job For Batman which tells you all you need to know about the band on stage and why you should not miss them if at a venue near you.

Anticipation and expectations were high going into the album but Thirteen Shots and the Freaky Pug Records released Tales That Start With A Whisper left them behind in their triumphant and impressive flesh chomping attack. A must have album for all horror, garage, rock, and punk fuelled fans.