There is always a twist of excitement when approaching a new release from UK rock band The Sea, fresh anticipation which has yet to be let down across their singles and especially their excellent album of last year, Rooftops. New EP High On… continues the immense satisfaction continually bred by the band though this time it offers their greatest moment yet in power, passion, and fiery invention.

High On… is a muscular release which explores the rock and blues elements which was sniffed at on the eclectic Rooftops, though there is still a place for melodic charm and emotive enchantment. Like its predecessor the EP is unafraid to mix up its sound and ideas to keep intrigue and captivation as lively as the energetic storm which cores the release. Consisting of brothers Alex (vocals, drums) and Peter D’Chisholme (vocals, guitar, piano), the duo from  Newquay, Cornwall has leapt upon the passions of rock pop with an insatiable enterprise and fire which is hungrily devoured by their growing legion of fans worldwide. Since forming in 2007 the pair has ignited Europe, US, and Canada with their fevered stage performances, whilst drawing potent acclaim for their releases including debut single Love Love Love, first album Get It Back, and of course the mighty Rooftops, all like the EP released on their own Lusty Records label. The band has a desire and greed when it comes to music which translates into their thrilling sounds, a drive which sees them relentlessly gigging including sharing stages with bands such as Muse, The Kills, The Enemy, and James Morrison, and overcoming in 2011 a freak surfing accident which saw Alex breaking his neck. Surprising all, especially as he faced the possibility of being unable to even walk again, the drummer was back touring within months and as the new release shows is back more formidable and feisty than ever.

High On… finds The Sea igniting their passion for dirty rock n roll with influences of the likes of MC5, The White Stripes, and the 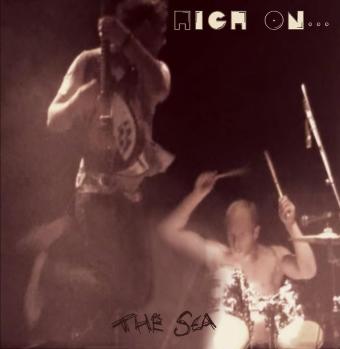 Stooges, all essences which make strong whispers across the EP though the band undoubtedly trigger their own unique presence through it. It also sees the band stripping down their sound to one guitar, a set of drums, and impassioned vocal squalls, the result a fire as raucous and commanding as anything on their previous releases with their more expansive armoury, but with an intensity and contagion which with ease declares the release as the best thing from The Sea yet.

Opening track Letter Bomb takes mere moments to ravage the ear with towering rhythms from Alex and a blaze of sonic persuasion from the guitar of Peter. It is an incendiary start which though settles into a less demanding gait with picky riffs and tempered beats once into its stride still, it agitates and excites with a sinew of aggressive intent. The vocals of Peter equally flame upon their entrance to offer a scintillating glaze to proceedings whilst the combination with all elements burning eagerly for the chorus is a brawling treat leaving senses and heart wrung out with passion. At its heights there is also a definite Rage Against The Machine intensity to the breath of the song with the blues gaited guitar solo raising temperatures further.

The following Run steps back on the directness though still refuses to bring a calm gait to its encounter. It is a hard rock/blues inducement with a furnace of emotive fire swaggering through sounds and vocals. It does not quite live up to the stunning opener but with the guitar offering a sure temptation and the energy of the track merciless in its smouldering soaking, you can only bask in its impressive heat.

The EP is, as is expected from the band, a diverse creature even within this heavy rocking direction bloomed on the release, Number One a gentle rock croon musically and vocally which barely makes a minute and a half in length yet still raises hairs on the neck in its brief presence, another magnetic twist of sound. Its short stay is more than just an interlude and makes a perfect lead up to the best track on the EP, Get Up Stand Up Die. The song is a monster of a rock tune with again the drums of Alex caging and igniting the senses with a rapid storm of beats to start things off before the guitar lays a sturdy rub of coarse and infectious riffs into the mix. It is an explosive fury of contagious confrontation which leaves one exhausted and grinning from ear to ear, even if like its predecessor the track is too damn short, but then again the best punk rock tracks usually are.

Completed by another triumphant tempest of exhausting energy, massive beats, and vicious guitar enchantment in the ferocious treat Lost It/ Never Had It and the pulse pumping slow burner Wednesday Trap which is as near to a rock show tune you could wish for and get wonderfully away with, High On… is another sensational creative bomb of a treat from the best emerging rock band in the UK right now. The Sea is destined to the greatest heights but why wait when there is this mighty feast of sound to enjoy right now.

Tags: Get It Back, High On…, James Morrison, MC5, Muse, punk rock, Rage Against The Machine, RingMaster Review, Rock, Rooftops, The Enemy, The Kills, The Sea, The Stooges, The White Stripes