Home › Music › Me, You and Thomas – Eventually

Me, You and Thomas – Eventually

With a lo-fi indie rock sound energising the air as well as the senses through potent fuzzy sonic persuasion, Eventually the new and second single from UK duo Me, You and Thomas continues the impressive emergence of a fresh sound which started with their debut single Repeat. The self-released song caught the imagination of a great many and with the new Howling Owl Records released track, the band is set to step into a brighter spotlight.

Consisting of Rhianna Berarey (vocals, guitar, piano) and Joe Sherrin (drums), the Bristol two-piece cement their emerging presence in UK indie music with a trio of songs which seduce and provoke with equal strength and accomplishment. The title track 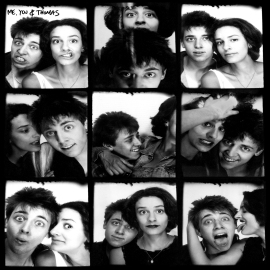 immediately takes a grip with its opening salvo of rolling drum hooks and engaging guitar beckoning, their touch wrapping an inviting arm around the shoulders of the senses, luring them deeper in the focus of the song and the impending scuzz lined bluster of its heart. As it parades its impressive presence within the ear there are loud whispers of bands such as Au-Pairs and Girls At Their Best as well as the scintillating discord challenging likes of Breeders and Throwing Muses apparent. The song is as infectious as it is aurally evocative and recruits the passion with ease to its contagious cause rewarding with intense rewards in return.

The following Stop Here has a less energetic freedom but a more imposing depth to its reserved gait. Again the rhythms of Sherrin cage and lead the intent of the song whilst the guitar of Berarey brings a steely narrative to the sound whilst her soft yet sharp vocals seduce with a lyrical embrace to match her open tones. Into its stride the track has an agitated atmosphere which soaks the ear with an inviting menace to make a distinct contrast to its predecessor but a co-conspirator in securing a solid engagement of the emotions.

Closing track Boundary takes another step into a slower emotive stirring which though it lacks the more instant attraction of the previous pair emerges as an engrossing and thought forming encounter. Again the bands previously mentioned comes to mind with elements of The Passions added, but the sound even with those references to old bands has a fresh bite to its melodic excursion.

With an extremely limited run to its CD version, Eventually is a single you need to snap up quickly but more importantly it is another step for a band we feel sure we will hear a lot more of.

Tags: Au Pairs, Breeders, Eventually, Girls At Their Best, Howling Owl Records, indie, lo-fi, Me, Me You and Thomas, RingMaster Review, Throwing Muses, You and Thomas