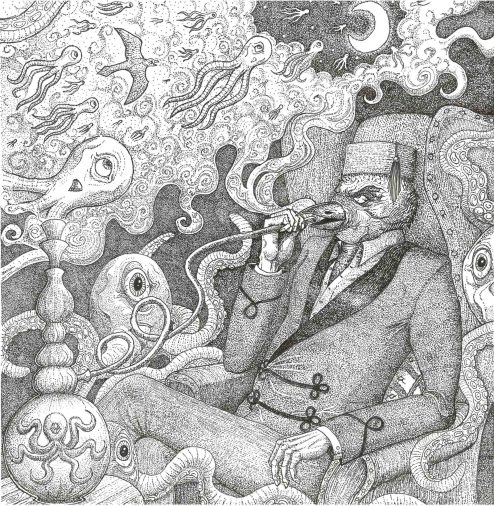 Fusing sonic manipulation, melodic discord, and compelling noise into an inventive and startling persuasion, UK band Hey Colossus has never stood still in stretching their and our boundaries, but with new album Cuckoo Live Life Like Cuckoo the band has created their finest hour for possibly our most rewardingly intrusive pleasure. Released via MIE, the eighth album from the London/Somerset octet has evolved their previously unrelenting and arguably sadistic sonic furnace into a sound which still offers nothing less than delicious abrasion but now takes its time to envelope, seduce, and corrode the senses.

Whether a coincidence or the spark to the shift in intent, the band has enlisted Part Chimp guitarist/vocalist Tim Cedar into their line-up on drums, his presence igniting a new and fresh energy within the existing potency.  Opening track Hot Grave immediately sets the scene, its grazing guitar rub and shimmering sonics a rough dazzle marking the start of pulsating rhythmic enticement and rousing flames of guitar. With a heavy swagger and intensive gait to match, the track churns up the senses with a stoner groove and an exhausting repetitive slow rhythmic entrapment glazed in similarly sculpted riffing. The vocals of Tim Farthing also have a caustic sway to their presence, their individual rough aural scars a blistering inducement to the hypnotic repeating prowl of the song. The crystalline enterprise which reaps the fumes of the uncompromising heavy stance adds another incendiary breath to the encounter and induces intrigue and magnetic compulsion from thoughts and emotions.

The following Oktave Dokkter seamlessly steps into place with a carnally driven bass which recalls early Killing Joke, as does the serpentine effected vocal squalling which walks the stalking rhythmic provocation. There is also an early Birthday Party psyche enterprise to the prowling cause of the song, whilst the noir spiced shadows are teeming with seedy whispers and devious temptation. Again the repetitive mesmerism from guitar and rhythm is as infectious as it is debilitating whilst the caustic ambience pervading all is an ominous and intimidating coating to the exhausting and rigorous embrace.

The album plays like one whole journey, an overwhelming encounter split into individual and distinctly unique parts, a satanic sonic jigsaw which corrupts and thrills on every level. How To Tell Time With Jesus is the pinnacle of this, its psychedelic drizzling within a sunset of sonic heat a smouldering entrancement which ripples with acidic veins around the continuing to impress rhythmic entrapment of Cedar. As with all songs the additives open up further flourishes and imaginative flames within the ingenuity, the punk vocal squalls and dub induced shimmering distortions a glorious and scintillating pattern. The singular gaits of elements across the surface of songs often belies the depth of craft and honed thought which bloom within the hearts of the compositions but reap the reward of the invention to accentuate their own particular potency.

Leather Lake is an intense and threatening doomy scourge with darkly melodic blisters and rapacious sonics which crawls over the synapses with insidious breathe whilst the following English Flesh is a maliciously coarse attrition which overwhelms the ear with cavernous hunger and a greedy intent vocally and sonically to ignite the passions further. The heavy electro sweep guiding the song is as addictive as the compromising swing of the malevolent groove at duplicative play, and all combined makes for a systematically ravaging seduction.

After the closing Pit and Hope and its reserved ambience and psychedelia rinsed suggestive embrace, the knowledge of how impressive and powerful this album is rifles through thoughts and emotions. Though it is not exactly an easy listen throughout the album undoubtedly is a magnetising encounter which evokes and provokes the strongest reactions and passions. Hey Colossus continues to lead the way with invasive and dramatically appealing sonic alchemy in the UK with Cuckoo Live Life Like Cuckoo probably their finest conjuration yet.