Home › Music › EP › Get Off My Shoes: Lets Not Rush Out And Tell The World EP

Get Off My Shoes: Lets Not Rush Out And Tell The World EP

With their name having already triggered a chuckling interest alone, there was keen eagerness to see if Belgium alternative rock band Get Off My Shoes could follow up with equally impacting sounds upon their debut EP Lets Not Rush Out And Tell The World. The answer emerged as yes though not without the sense that the band has much more within them and the really impressive elements within the release suggesting that this was also a missed opportunity to really thrust their name forward with startling impact despite its strong and pleasing showing. There is nothing not to like about the band, their creative sound, and the very enjoyable EP, but though it does not always quite leap out of the speakers the potential of the band is undeniable.

Hailing from Antwerp, Get Off My Shoes was founded in 2010 by chief songwriter and singer Jonas Meukens. Joined by guitarist Stijn Debontridder, bassist Glenn Van Criekingen, drummer Ziggy Van Wallendael, and Jasper Willemen on synths, the quintet from initially spending time honing their sound and songs soon made a strong presence for themselves on the live circuit with over a hundred European shows in the past couple of years, gigs which included supporting the likes of The Subways, The Get Up Kids, Joyce Manor, and Apologies I Have None, to name a few. With influences such as Bloc Party, Tokyo Police Club, Weezer, Two Door Cinema Club, and Foals impacting on their similarly flavoured melodic enterprise, the band and their Thanks But No Thanks Records first strike into the world are certainly drenched in a promise and captivating invention which only suggests a bright future for the band. 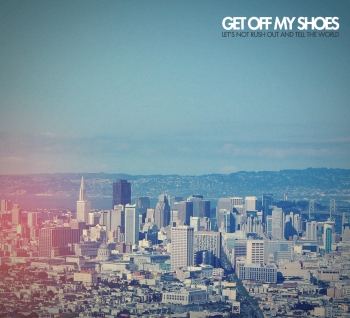 investigation whilst only hinting of the musical exploits to come. The following Dead Of Night instantly engages with jangly guitars and crisp rhythms soon joined by an electro breath which sizzles upon the surface of the energetic yet restrained blaze of sound. As the song slips fully into its stride its command of feet and attention is complete as the guitars further tempt the senses and the vocals of Meukens bring their plain expression but accomplished texture to proceedings. It is a strong if in hindsight an unremarkable start in the lie of the EP but one which easily ensures a hunger to hear more.

The simple electro start of I Was Told A Lie Once with emotive vocals in tow does not exactly ignite excitement but again comes with a lure into the heart of the song which is hard to refuse. As it expands with guitar and energy the song comes alive with thrilling power, the vocals finding a rich passion to match the intermittent fury of melodic and energetic urgency. It is a big highlight of the release matched by next up Ghosts & Villains. Highly infectious and anthemic in its stance, the song is a magnetic stroll of incendiary guitar coaxing and inflammatory melodies which is just plain irresistible and one of the primes reasons why you sense a strong horizon for the band.

We’re Going Down But We Don’t Care and Autumn complete the EP, the first an enthralling track with plenty of ideas going on within its well-crafted body of inviting rhythms and further heated melodic temptation. As the EP moves through its contents the vocals seem to get more expressive and impressive to add real feeling to this particular song though on the other side there is a feeling the band could have made more of the synth and its emotive presence, something sure to evolve as the band also move forward one suspects. It is a strong song but fails to light the same fires bred by previous tracks but another which leaves good thoughts about the five-piece. The final song is another triumph though, its gentile ambience and compassionate melodic caresses scripted with finesses and emotion to translate just as potently within feelings and thoughts of the listener. Easily as impressive as Ghosts & Villains in its very individual way, it is not hard to see why the band has earned such a strong following and why we are joining them.

As mentioned in many ways Lets Not Rush Out And Tell The World does not find the depth of riches it suggests enough times to really fire up a constant passion but easily does more than enough to excite and leave a strong satisfaction as well as inspiring the hunger to hear a lot more form the band.

Tags: Alternative Rock, Apologies I Have None, Bloc Party, Foals, Get Off My Shoes, Joyce Manor, Lets Not Rush Out And Tell The World EP, RingMaster Review, The Get Up Kids, The Subways, Tokyo Police Club, Two Door Cinema Club, Weezer