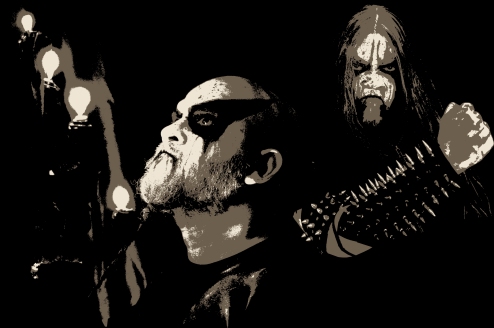 Expelling malevolence which is raw and instantly venomous, Nihil Est Monastica the new album from Brazilian black metallers Patria is an exhausting and compelling release. Blatantly inventive and almost secretly addictive, the thirteen track beast leaves no sense or thought free of violation and hunger for its abrasively imaginative sounds. Though not breaking into new boundaries the early nineties driven sound certainly stretches limits for the fullest rewards. From those previously aware of the band, Nihil Est Monastica is said to be them at their most experimental and viciously driven, on the evidence of the album there is no reason to doubt just richly enjoy.

Patria consists of vocalist Triumphsword and multi –instrumentalist Mantus, with the band expanding to a quintet for live performances. The first appearance of their black metal and ambient fusion came with the 2008 demo Hills of Mist, the release opening the doors to the band unleashing shadows and darkness which invades and persuades with dramatic efficiency. The following year saw debut album Hymns of Victory and Death followed in 2010 by the second Sovereign Misanthropy, both earned good reviews and brewing acclaim. September of the same year saw a MCD entitled Gloria Nox Aeterna released on, as with the two full-lengths, Russian label Monokrom. Stronger and more intense awareness and acclaim came with third album Liturgia Haeresis in 2011 on, like the new album, French label Drakkar Productions. The release saw the band expand their already in place dark mixture of black metal and atmospheric experimental avant-garde music and with Nihil Est Monastica Patria has taken it to new riveting heights, fusing numerous flavours and textures into their almost rabid consumptive blackened enterprise.

The opening title track is a brief but impacting instrumental, the portent for something colossal and powerful and perfectly sculpted. 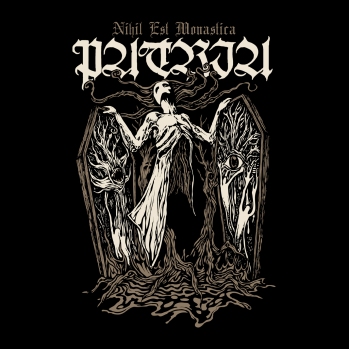 A great many bands are now opening up releases with this epic sounding type of intro but few back it up with sounds which live up to the declaration, something Patria do with accomplished ease. The following Conquering Death’s Palace ravages the ear with full intensity but a restrained gait, the song letting the persuasive tight guitar teasing and rasping vocals instigate the first seeds of temptation initially. Into its stride the track has a swagger and allure like a cobra except its toxicity is sharp and deadly whilst that of the song is raw and greedily welcomed. With firm rhythms and a predatory bass prowl the track does not rip the senses into shreds but overwhelms with a persistence of poisonous breath and skilled enterprise for even greater reward for them and us.

Through the likes of Dark Cosmic Legend and the rampaging Nyctophilia the album squeezes tighter on the passions, the latter of the pair a delicious ride through bone splintering rhythmic maliciousness and scorching sonic intrigue. It is after the exceptional epically triumphant instrumental Altar where things really reach a plateau of scintillating and bruising excellence. Sacro Vale dos Encantos is a terrific depravity upon the senses, a track which from being a brawling and unrefined tempest evolves into a seduction of sharply grooved and contagious melodic lashes from the guitar and light expelling suggestive ambience all within the still imposing breath of the track.

The unpredictable and brutal Ascendent of Darkness and equally virulent Storm Before Eternity explore and ignite the passions further, and though like the album they are not going to be an easy ride for a great many they leave a potent and lingering passion behind. The guitar work of Mantus is exceptional but every aspect and instrumentation upon the album is as accomplished and imaginative as you could wish without unbalancing their unity and the songs themselves. The grazing vocals are in many ways formula black metal but again craft a presence which enhances the tracks and takes a keen hold on the ear.

Closing the album with a decent enough cover of the Sarcófago song Black Vomit, Patria has unleashed a magnificent scourge upon ear and passions, a release which stands to the forth of other genre releases over recent months. Nihil Est Monastica is a must for any black and experimental extreme metal fan.