Destroy D.C. : The Pride Of The ASBO Generation 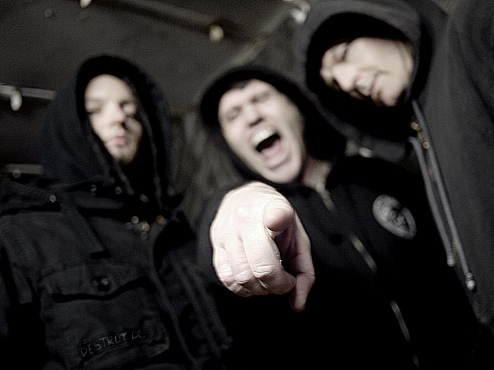 Having just caught our breath after the outstanding recent release of XXIV from UK Subs, British punk has another explosive piece of inventive ferociousness to thrill us with in the formidable and exhilarating form of The Pride Of The ASBO Generation EP from Destroy D.C. The four track release is a stunning intense fire of energy and passion honed into a formidable compelling force, an irresistible inciting fusion of progressive punk and roots and dub.

Destroy D.C. began when Spike T Smith, the drummer for Conflict, wanted a project to bring forth the songs he was writing and had created round the time the legendary punk band went on hiatus in late 2009. Enlisting guitarist Gav King who was also looking for a vehicle for his ideas, and bassist Si Turner, the trio squeezed in writing, rehearsal, and recording between their individual busy touring schedules, Smith on Steve Ignorant’s Last Supper shows, as well as festival appearances with Killing Joke and the New York Dolls, King with Fields of the Nephilim and both men more recently with the return of Conflict, as well as all three members being the backing band for HewhocannotBeNamed (The Dwarves) for his solo UK dates. Destroy D.C. was officially launched on 21st December 2012 with the March 26th released The Pride of The ASBO Generation through DIY label Revenance the first of a procession of EPs.

The release opens with the raucous and uncompromising Road To Redemption, a track which stares eye to eye with the listener 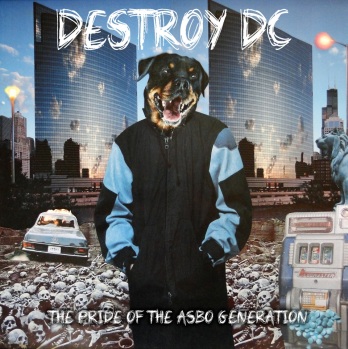 whilst teasing and tempting them with brawling vocals, lethal hooks, and a contagious breath. The fiery groove which frequents the song throughout is the first encounter for the ear soon joined by punchy rhythms and a rich growling bassline. As eager as it is hungry, the song rampages through the ear without a much respite from its corrosive riffs and melodic sparks, yet still teases and taunts with a wonderful adventure to its gait and prowl. Within a restrained yet intimidating deep breath in aggression, the band also brings a sensational diversion sculpted by imagination and ingenuity which seduces and eats the passions with equal strength to the marauding sounds elsewhere. Ending as it began with a further hardcore scowl to the vocals and intensity to its punk rock abrasion, the song is an immense first confrontation to band and EP.

The following Those Days Are Gone also strikes its first blow through a magnetic almost insidious groove which captures the imagination before the song fully unleashes its physical and inventive might.  A frantic inferno of attitude, passion, and ravenous agitated drums from start to finish, the song is potently veined with that addict making groove within an insatiable appetite to chew and incite thoughts and emotions. It is caustic rock n roll at its best, a fusion of hardcore and original punk which rewards as dramatically as it accosts the senses.

Whereas elements of the previous songs mildly suggest the roots and dub influences third song Tear It Down is a full on pleasure incorporating both aspects of their main influences for an impossibly compelling and thrilling ride. Like a blend of Dub War, Steel Pulse, and Ruts but with its own individual heart, the song is a simmering yet fiery piece of emotive and provocative majesty. A pulsating crawl through a reggae soaked reflection book ended by punk snarls, the track is a sensational creative declaration which rivals the aforementioned Ruts classic Love In Vain.

The band close up the EP with another striking slab of imagination in the erosive pop punk triumph of the title track. This is no glossy melodic piece of musical candy though but a caustic and raw stomp with loud dub whispers and old school punk aggression. The song shifts and evolves throughout to ignite further lustful ardour for the release especially with the drop into a slow melodic and shadowed prowl midway which recalls the Dirk Wears White Sox era of Adam and the Ants. It is a brilliant ending to an outstanding and invigorating slab of punk at its best.

Knowing that The Pride Of The ASBO Generation is just the opening assault of what creatively is to come ahead from Destroy D.C. it is safe to assume that the anticipation and wait for the next release is going to be very impatient.