Sound Of The Suburb: Self-Titled 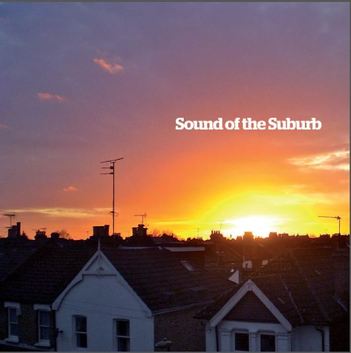 Formed in late 2005, North London band Sound of the Suburb has earned a good reputation around their local area of East Finchley for their enjoyable live shows of cover songs. A ‘pub band’ of the finer persuasion, their energetic performances has brought strong responses and an equally firm fan base their way not only to their versions of classic songs but also their self-penned compositions which they brought into their shows since 2008. Now with a collection of only original songs the band is releasing their debut album, a release packed with variety and fun.

Based in Hampstead Garden Suburb (The Suburb), the quintet of vocalist Rafael Landicho, guitarists Chris Berlingieri and Martin Ross, bassist Steve Phillips, and drummer Mike Solomon, wear their influences and tastes on their sleeve and openly within the songs on their album. The release rather than mixing up essences of rock, pop, rockabilly, and folk rock into a distinct and unique sound prefers to devote individual songs to one flavour which works as well as it fails. The result is a release which feels like one of those old Top of the Pops record compilations where some songs persuade the passions and just as many do not. The album is like one assumes their live shows, a record catering for numerous tastes with at least one song but lacking a real identity of its own. Despite that it is a lot of fun and raises numerous smiles along the way.

Opening track Take A Chance immediately woke up the ear and passions with its rockabilly stroll within a classic rock n roll presence. The guitars jangle and tease with accomplished mischief whilst the bass romps with a heavy lilt and with the smouldering guitar solo mid song it is a pleasing and satisfying start. With the flavour it is steeped in a favoured treat here hopes were high for the album but instantly dashed by the following ‘70s Girl. The first single from the release, the track is a classic rock soaked companion with a punk edged chorus ripped from the late seventies though the exact source escapes as this is written. With dulled cow bells and blues drizzled guitar the song is an accomplished and catchy encounter if lacking a spark to really lift it to greater heights especially alongside its strong predecessor.

One of the biggest flaws upon the album is the vocals sad to say. Though the first two songs suited the style and voice of Landicho others such as Run Against The Wind and Missunderstood suffered from his flattened and at times weak delivery. With reflection and a different approach it is not a defeating problem but does on the album defuse the promising strength of some songs. It has to be said though on the opener and the endearing folk tinged The Ballad Of East Finchley he equally adds to the stronger engagement as the sounds.

Further tracks like Power Of Attorney and Salvation fall short of hitting the mark whilst still being decent enough songs to please a pub or party audience who want to have fun and entertainment, something to be fair the album as a whole easily succeeds in. Splitting the pair is the best song on the release, I Gotta Know (Twangy), another rock n roll treat with rockabilly urgency. With a potent Eddie Cochran tease to its exhilarating presence it, along with the first song, suggests this is the area where the band should explore as it is no coincidence that the really exciting and successful moments on the album, where it truly comes to life, are rockabilly stemmed.

Sound Of The Suburb is an album which may flounder for many but equally could find a greedy appetite in others especially if they are looking for, like the band provides live, a great backing soundtrack to a party of some sort where attention is divided in many directions but the body wants to feel accomplished eager sounds to dance to.