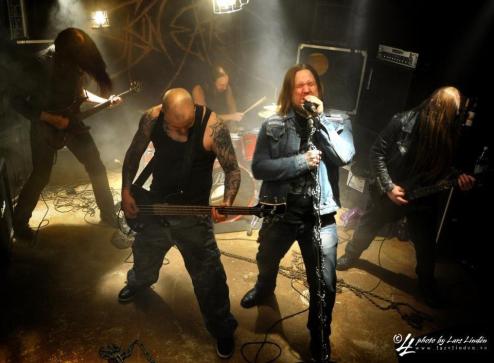 With aggressively sculpted malice borne from its charnel house of blood drenched intensity and bone splintering violence, Dermal Harvest the debut album from Swedish death metallers Skineater, is an impressive and savage pleasure, a release which is equally viciously antagonistic and carnally satisfying. It is an introduction for most to a band which since forming in 2008 has instilled a primal rapture and acclaimed driven attention within a great and growing many. Seizing the opportunity to find out more about the band and its first album we had the pleasure of talking with Skineater founder and guitarist Håkan Stuvemark.

Hi Håkan and welcome to The RingMaster Review, thanks for talking with us.

For those still untouched by the Skineater aggressive scourge of sound tell us about the beginnings of the band. Are we right in thinking the band was a slow moving thing for the first couple of years? What was holding it back from fully emerging or was it an intentional thing to get your sound right?

Yes, you could say we were slow moving, mostly of natural causes .In June 2009 Jeramie Kling and I recorded two songs, He Was Murdered and Dismantling, Which you find as the first two tracks on Dermal Harvest. We had them finished in September or so and sent to a couple of labels and two of them were interested but unfortunately money is an important detail overall more or less, especially in this case with Jeramie in the U.S and me in Sweden. However we worked on that issue every now and then with labels over quite some time and coming to that was kind of long time with no action, loss of great enthusiasm without losing interest though!

What was the driving intent for the band when it started?

It started when I played bass in Vicious now known as GrandExit. I hadn’t played much at all for some years, practically nothing until I joined them in 2007. Autumn 2008 we recorded their third album which I’d written a song for and it was during the recording of that song when I played the guitars etc. I woke up and Hey! This is what I’m supposed to do and I can do! I had found myself again! So that’s what drove me and still is driving me. I left the band a couple of weeks after and intensively writing songs and as you’ve heard it ended up brutal!

2011 saw Carnal Forge and In Thy Dreams drummer Stefan Westerberg join to take bass duties in Skineater, was this arguably the point the band found its impetus to move forward and break free of restraints and recognition shadows?

We had in mind to be become a five member band but as I said earlier “long time with no action……..” Stefan and I got in contact February 2011, he wondered if we needed a bass player. Yeah, sure! Then he was on board. We knew each other since we both played in In Thy Dreams. He was the addition needed, new blood in the band, new energy, another mind.

The members of Skineater have some impressive pedigrees and experience band wise between them; can you give a quick run-down of their histories before the band?

The Swedish metal inbreed haha. Well, the most essential bands of each one of us:

The band signed with Pulverised Records for the release of your debut album Dermal Harvest, what did the label offer which drew you to them? 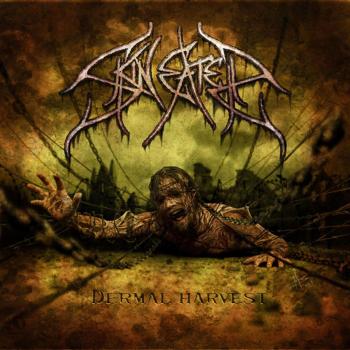 Yes, we ended up there on Pulverised. About the new energy and blood to the band, when Stefan joined the two of us began chasing more deals and Pulverised showed interest and over some discussion with them and contract adjustments they had us. It fitted our plans, recording deals and all that. All seemed just fine!

Dermal Harvest we called a charnel house of blood drenched intensity and bone splintering violence, and though we felt it was not ‘re-inventing the wheel ‘, it was an impressive and savage antagonist which you can only devour greedily. How would you describe it to newcomers and are we fair with all our points?

I think you got it quite right! Groin crushing, cocky death metal in an excellent blend for everyone!

The album was recorded at various locations? Was this intentional or just the things which new bands have to deal with through finance and opportunity challenges?

It’s in many ways very practical, especially due to that we are living spread over Sweden. Would work for me as I live only 25 km from Västerås where the studio is but for Stefan and Jörgen it is 400-700 km’s one way. Economic disaster to commute. We recorded the drums in the studio and the other instruments at our own places then we sent it all to Studio Underground for re-amping, mixing and mastering.

Tell us about the recording of the album, and how long the release was in coming alive from its first seeds to release.

I think we can refer a little to the previous question about the recording. However, the recording began in August 2011 when we recorded the drums. Later, maybe in November I started to record the guitars, Jörgen had been working on the vocals for a while at that time. On top of that it was the bass, must have been February 2012 and last of all Petri Kussisto recorded his guitar solos in his studio and sent them to Studio Underground. The album was completely mixed and mastered in June that year and released in February this year (2013).

Did the album evolve much during the actual recording from the original demo ideas?

We had solid demo songs/sketches but we improved practically every song. There’s always something you wanna change, small details and new ideas coming up

From an impressive start Dermal Harvest for us built up song by song to its biggest triumphs and intrusive might. How did you go about setting the track order on the album, did as much thought go into that as say the production and the art theme?

We wanted to give the listeners a good album from start ‘til end so we listened quite a lot and spent some thinking over the tracks and order. It turned out very well!

Talking about the artwork, who created the excellent cover art?

Mattias Björkbacka made it. He also produced the video for the song Dismantling we recently premiered. 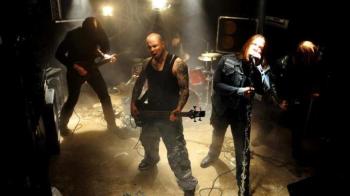 The art depicts perfectly the lyrical and sonic predatory hunger and intensity of the album, did Mattias have sounds to work with, be inspired by first from you?

Mattias and I know each other so he’d heard more than one song for sure. He and I talked a lot about what the cover should look like, many ideas and details in the air. You know, one idea leads to another which leads to yet another and so on and this Ended up in perfection!

Is there a moment of the album which you feel is Skineater at its most potent, shows the purest breath of the band?

Only one and short answer on that…On every song!

What are your hopes for the album in the progress of the band and where are you taking it out live to share its glories?

That we reach out even more; get new fans which in their order will spread our word. We are hoping to get some live shows now. The album was released early which is good and festival shows would really be something. Of course other shows too!

Again thank you for talking with us. Any parting words you would like to offer?

Thank You! That’s the hardest question! -Spread our word folks in our way to conquer the scene!