There is always a keen sense of anticipation when first approaching a band from South Carolina as too NC, the states the givers of so many impressive and startling forces especially within metal. Greenville death metallers Lecherous Nocturne is no exception in its individual way. Their new album Behold Almighty Doctrine is a record which raises debate within thoughts and emotions; across its length it either seducing the senses without any room for indecision or leaving them flat and almost underwhelmed. For all of that though the band is compulsive listening and ignites the need to investigate and repeatedly immerse within the destructive brutality of their new album. The release does not especially stand as a challenger to the top contenders for album of the month or beyond, but it certainly works under the skin to leave the want to feel its insidious endeavour on a regular confrontation.

Founded in 1997, the quintet of vocalist Chris Lollis, guitarists Ethan Lane and Kreishloff, bassist James O’Neal, and drummer Alex Lancia, has released an album which builds on an already intense reputation of the band for their intrusive and impacting sound. From the release of their self-tiled EP, Lecherous Nocturne has gone from strength to strength, the band signing with Unique Leader Records on the back of the release. Fusing the darkest venom of black, death, technical, and thrash metal, into raw sonic scourges the band set a mark for themselves within extreme metal with their last album The Age Of Miracles Has Passed and with Behold Almighty Doctrine continues the ferocity and accomplished sonic violence they have become renown for.

Topped and tailed by related evocative instrumentals the album explodes into full view with Ouroboros Chains, a track which 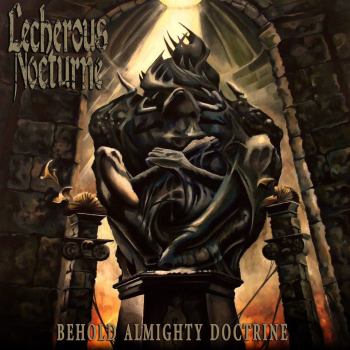 instantly carves its presence into the senses with carnivorous intensity, malicious riffs, and rhythms from drummer Lancia which flails the ear with hateful precision and unbridled malice. The track is a maelstrom of energy and corrosive interplay between the rhythms and the lethal guitar spite, with a spine of predatory bass encroachment watching all. It is a fiery tempest which touches upon bedlam but just retains control at all times and with the abrasive growls of Lollis a squalling furnace of anger, the song is a solid start.

Bring The Void and Archeopteryx continues the hellacious start, both a storm of at times startling technical accomplishment wrapped in a caustic cyclone of disarming sonic violence within the asylum of unbridled ideas and mayhem. Both tracks are again like the opener, richly agreeable contusions upon the senses but again without sparking any strong fires of passion They do strike with a lure which wants you to explore their annihilatory purpose more though and that is a strength in itself many others fail to hold a rein on.

The first real highlight of the album steps forward in the brutal shape of Those Having Been Hidden Away, a collision upon emotions of intriguing grooved sonics and a tsunami of beats and primal rhythms from Lancia and O’Neal respectively. To be honest it is hard to pin point what it is about the track which elevates it from its predecessors but with a hellacious altercation it ignites a burning flame towards its uncompromising company.

After an unexpected and impressive piano instrumental in Prelude #2, the album immediately devours the ear with the heightened hunger and excellence of Judgments and Curses, a track which scars and scores with the horde like fervour of a pack of wolves . It is another song which triggers stronger responses with wilful and manic sonic dissension to leave thoughts and satisfaction reeling in pleasure.

Across the remaining tracks Lesions from Vicious Plague, Caustic Vertigo, and Creation Continuum, the band offers more of the same raptorial technical violence in blistering tornados of explosive and seemingly uncontrolled devastation. More of the same also is unfortunately accurate when it comes to the similarity across the tracks, the trio and arguably album for the main, lacking any real surface individuality and side by side occasionally blurring into one singular scorching of the ear.

It would be amiss though not to say that with determined focus and full immersion into the tracks there is an inspiring diversity underlining the songs but whether most listeners will take the mission to explore deeper into the testing and uncomfortable listen is debatable, which is a shame as there is plenty on the album which suggests the band has the potential to deliver an awe-inspiring classic at some point. Behold Almighty Doctrine may not be it but it is easy to recommend to anyone who wants something different and unconventional in their extreme metal.

Like Loading...
‹ The Last Legion: Conspire EP
Forever snarling: an interview with Charlie Harper of the UK Subs ›