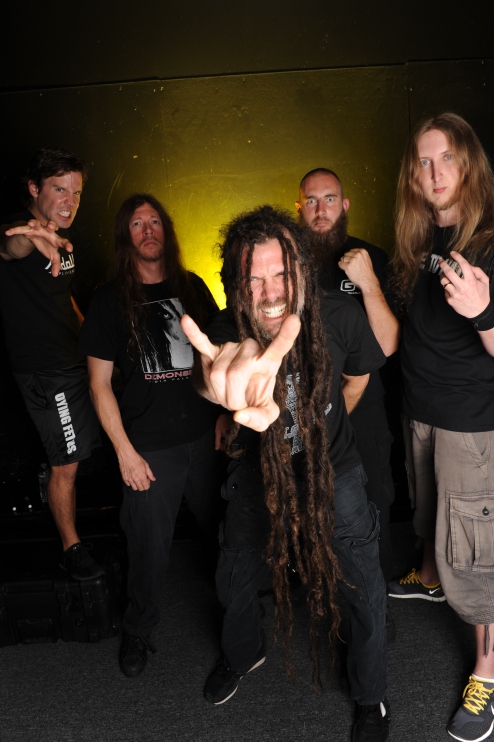 Approaching Unborn the new and tenth album from Tampa death metallers Six Feet Under there was a mix of expectations after hearing the songs making up the release were written around the same time as those on their more than decent previous album Undead of last year. Would they be tracks which were deemed not good enough or suitable for their previous album or could they stand alone with equal or superior results? It does not take too long to realise they certainly have the strength and quality to match those on the last album though equally they do not leap beyond it in standards or engagement either. It is basically a sister release to Undead, a sideways step or second part depending how you look at it which leaves one more than satisfied but devoid of any fired up passion towards it.

With a new line-up of guitarists Ola Englund and Steve Swanson, bassist Jeff Hughell, drummer Kevin Talley (Dying Fetus, Misery Index, Chimaira), and the distinctive corrosive tones of band founder Chris Barnes (ex-Cannibal Corpse), Six Feet Under return to the scene of ‘the crime’ satisfyingly created with Undead to give arguably a more vicious and visceral musical breath to the again Metal Blade Records released Unborn. The songs making up the album again are borne from when Barnes wrote with a group of guitarists/songwriters in Ben Savage (Whitechapel), Rob Arnold (ex-Chimaira) and Jari Laine (Torture Killer), a union which has brought rich rewards across both albums. 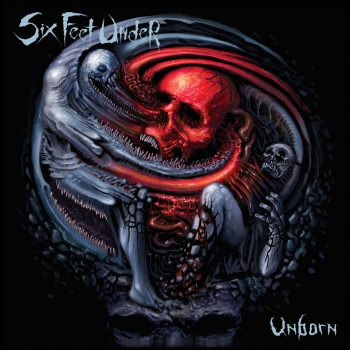 muscles and intent with dramatic grooves and caging rhythms whilst Barnes exploits every syllable of his delivery with a corruptive and intimidating abrasive primal growl. The song whips and scores the ear with accomplished and inventive sonic intimidation crafted into barbed lures which equally seduce and threaten. It is a pleasing start which captures the imagination ready for the following encounters starting with the prowling Prophecy. The track swaggers with spite and devious intent knowing its weaponry of sinewy riffs and hungry rhythms is a seduction hard to resist. The song does make the keenest persuasion and ticks all the boxes a musical appetite has but its failure to find anything unique to really excite slightly defuses its promising strengths a little.

It is a good start though and leaves one more than happy to delve deeper into the release with an immediate reward from the outstanding Zombie Blood Curse. The track stomps with confidence and magnetic unrelenting purpose, the guitars chugging with a greedy hunger and bass adding extra raptorial malevolence to the rampant endeavour. Mid-way the track slips into a sonic enticement which initially feels wrong but soon leaves an appealing flavour before the song returns to its carnally conceived romp. It is by far the best track on the album and a rival to the greatest moments on the previous album too.

The likes of Decapitate, the carnivorous Fragment with Barnes at his most venomous, and The Sinister Craving with crippling drum skills from Talley carving up the senses, all make their mark though without lighting any rages or fires inside. Despite that the album continues to satisfy and pull the listener into its firm grip squeezing with extra thrills through Alive to Kill You and Psychosis. The first of the two chews and exhausts the senses with a riotous and eager bloodlust honed by the vocals and sharp guitar scything across the ear whilst the second moulds and perverts emotions with fiery sonic teasing and imaginatively destructive guitar confrontation.

Unborn is certainly a strong and pleasing release which alongside the last album sees Six Feet Under finding a much more widely palatable and impressive presence with vital grooves and moments of inciting invention to those not already persuaded by the band. Whether it will convince all that the band is their new passion is unlikely but neither will the album leave any depth of displeasure in its wake.