Home › Music › Album › Instead of a Kill: Divination

Instead of a Kill: Divination 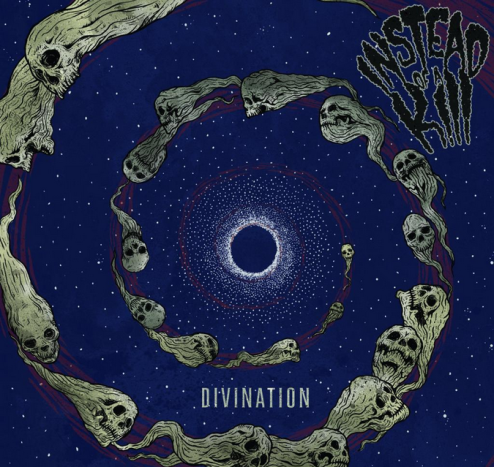 It is fair to say extreme metal is a potent beast right now with a multitude of bands and releases unleashing towering devastations with extensive enterprise and insidious venom within the expansive genre. To these riches of violating triumphs you can now add Serbians Instead of a Kill and their debut album Divination. The release brings deathcore into an agitated union with electronic invention, though both aspects seem to lie alongside each other on the album rather than entwine their creative hearts, as well as other heated flames of sound. It is an album which intrudes upon and incites the senses as well as emotions for an enthralling and deeply rewarding confrontation.

Formed in 2009, the Belgrade sextet of vocalist Jay H. Dee, guitarists Marko Galantic Gale and Uros Andrijasevic, bassist Aleksa Milosevic, drummer Marko Danilovic Tihi, and Nemanja Trecakovic on electronics, have a strong pedigree and experience behind them with various bands within their homeland. Their sure and accomplished styles skilfully shine within the album and sound of Instead of a Kill as well as bringing a sure intent to stretch and explore their ideas with imagination.

From an atmospheric and scene setting intro loaded with dramatic breath and a sampled sound bite from the original The Day The Earth Stood Still movie, the album immediately rubs, niggles, and sears the ear with new single Flying Spaghetti Monster. Its initial senses scorching sonic provocation is aided by escalating rhythms and predatory bass taunts guided by excellent vocal squalls which share serpentine malevolence and guttural malice. Into its stride the song consumes with a tempest of death and metalcore completed with veining flames of nu-metal and grindcore. The electronics simmer and spread their colour throughout the track and though they are often submerged within the intense storm they pick their moment to voice their presence perfectly and with real strength.

The outstanding start is continued by the following The Creator of Lies and Eyes of the Sickest, the first a ravaging scourge of energy and primal hunger honed into a contagious brawl upon the ear. It is uncompromising from first maul to last but in between evolves through melodic metal enterprise and swine coated malignity. The second of the pair spreads its purpose further with vocals at times finding a caustic graze Lemmy would be proud of and the music taking on a technical almost djent seeded manipulation which bewitches and corrupts. The track also marks an increasing darker intent coming over the album. The song is not necessarily the most corrosive on the album, especially with the mesmeric and emotive rain of sonic guitar invention creating its climax, but the hate and vindictiveness certainly intensifies the further in to the album you go.

The glorious opening guitar caresses of Observing What is Stored in the Subconscious underpinned by a distressed ambience brings in the destructive bitterness of the hardcore bitten vocals and the merciless marauding sounds to again overwhelm the listener. Though the track does not light up the same ardour as previous songs its almost dizzying invention and vengeful presence is impressive and eager consumed as is its successor the title track, a song with a tsunami of crippling rhythms and edacious riffs which does re-ignite the previous ardour with a vengeance.

With a couple of brief atmospheric pieces similar to the opener included, the remaining tracks on Divination stand with their own individual execration to succumb and enthral the senses. Plastic Pelvis takes the lead and highest plaudits with its erosive and hostile brutality whilst the equally peace resenting Fetal Ethanol leaves no room for breath or escape from its insatiable bruising.

The album is an outstanding despoiler of the ear and beyond brought with imagination, striking craft, and pure undiluted passion. It is not an easy listen at times but never comes without an intriguing ingenuity which captivates and thrills to temper the carnivorous stance of the release. Instead of a Kill deserve to find a wider recognition well outside of their homeland and on the evidence  of Divination you would not bet on it being anything but a sure deal found soon.