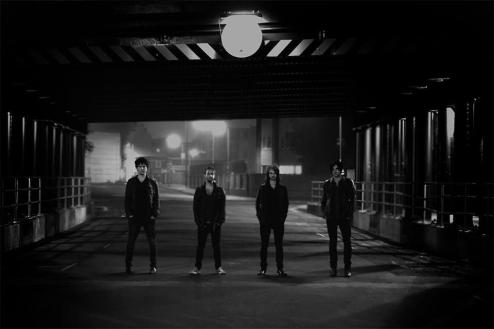 UK rock band The Lost Souls Club has earned a strong reputation and acclaim for their commanding shadowed rock n roll but as yet has not ignited the awareness they deserve. Whether their new EP High Noon will be the trigger only time will tell but it will not be for the want of quality and compelling invention. The release is a fiery and bruising encounter which offers no pretence nor makes demands but provides fuel for a raging fire of pleasure for its impressive offerings.

The Southampton quartet of Jon Tufnell, Simon Jackson, James Freemantle, and Jon Lamont, merge heated essences of varied rock flavours from alternative and psychedelic to melodic and indie with extra spicery from shoegaze and garage rock. Formed in 2010 the band takes influences from the likes of Led Zeppelin, The Jesus And Mary Chain, Placebo, Nick Cave and The Bad Seeds, and Black Rebel Motorcycle Club, to name a few, into their own distinct recipe of scuzzy rock n roll. Musically the band carry heavy whispers of the aforementioned bands so at any point a reference easily springs to mind but it sculpts it into an inspiring and raw gift of its own.

The release opens with the irresistible Romeo, a track which immediately feels like an old returning friend in new and inspirational

clothing. The initial rich guitar lure is soon joined by ripe rampant beats and expressive earnest vocals, the combination as the bass offers its darkened menace, a compelling and inciting intensity upon the ear. The prime riff persists with its addictive resonating grip to fire up the passions the longer its feeds on their hunger and once the track breaks in to a punk rock storm of coarse energy and insidious seduction, the track needs persuade no longer to the calibre of its impressive presence.

The following Kiss Away The Sun caresses with a blistered enveloping ambience, its wrap veined by raucous guitar provocation and again emotive vocals which tell their own unique tale. The bass and drums bring a sinewy frame to the song and its dreamy if intimidating atmosphere, the union leaving a mesmeric invitation which is hard to refuse. A mix of The Jesus And Mary Chain, House Of Love, and The Mouth Of Ghosts with the raw edges of Birdland, the track induces another belt of rapture with its diverse and equally delicious enterprise and monochrome light.

Shoot Me Down bristles with menace and confrontation, the fuzzy guitar resonance and devouring bass evocation a charred encounter which is in no rush to claim its victory. Though brief the track commands attention and soaks the senses with a brooding and ravenous intent whilst musically the equally grave emotive wash lights a Nine Inch Nails/Queen Of The Stone Age smouldering in its sententious heart. Lyrically song and EP is themed by conflict between opposites within oneself and like the music creates evocative and seducing connections to the listener.

The release is completed by We Are All Gonna Die Anyway and I Know I Spoke Too Soon, the first another energised romp for the senses, its familiar tone and devices refusing to reveal their sources but vibrant with recognisable irresistibility. It is a punchy anthemic slab of feistiness which contrasts and introduces perfectly the closing simmering glories of I Know I Spoke Too Soon. Mellow and emotively magnetic the track is a psyched melodic dream which pervades the ear and beyond with elegance and flames of passion which sear at the touch.

High Noon is an excellent release which deserves to set the band on the path to the widest recognition. If it will time will of course reveal but The Lost Souls Club can hardly do much more to sway the listener.