Home › Interviews › Expanding the Extreme: an interview with Giannis K of Dark Vision

Expanding the Extreme: an interview with Giannis K of Dark Vision 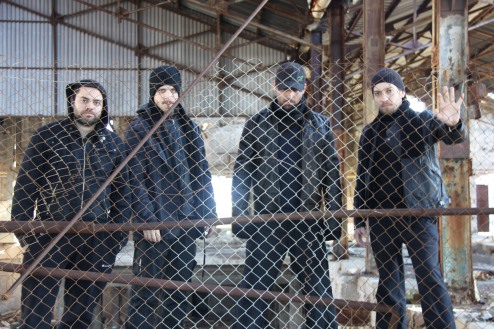 For over fifteen years Greek extreme metallers Dark Vision has earned themselves a strong reputation in the metal underground for their expansive death metal sounds. The recent release of their Ingrowth EP shows the band is stronger and more inventive than ever, their melodic death metal sound soaked in blackened overtones and stirring essences of classic metal and rock n roll a compelling encounter which stands out for band and extreme metal. Seizing the offer to find out more about band, its history, and the new release we set about drummer Giannis K with plenty of questions…

Hello Giannis and welcome to the site.

Firstly for those yet to discover your sounds please introduce the band and the entity that is Dark Vision.

Hello! First of all we would like to thank you for the opportunity to speak through your magazine. Dark Vision exists since 1996, we started playing atmospheric/heavy/black metal continuing these days into a straight forward death/black metal. Our influences lately covering many genres such as death/black metal, rock, classic heavy and all these under a rock’n’roll attitude…  If someone really needs to put a table about our genre, we can say that band’s like Satyricon, Behemoth, Black Sabbath, Voivod, etc. defined our nowadays style.

The band began in 1996, longevity many bands can only dream of. What has kept you inspired and passionate as a band?

The reason that this band started many years ago, was our love in this specific style and also for its subgenre. This made us to continue until now.  The magic moment when you creating a song or you are on stage, keeping you vigilance.  Another very important reason is that as a band we are not playing as professionals but at the same time we are trying to act as much a professional do.  In simple words, when a band is playing for the money there is a certain point that the musician will consider most of the time firstly the profit… In our case as we said because we are not playing for living we have the privilege to play whatever we want in our way.

How has your music and intent as a band evolved over the past 16 or so years?

We have definitely evolved all these years.  Apart of the several line-up changes we grow up as personalities, this made us think with more mature in every way from creating music to acting live. With the current line up the band continues the last years a specific way which evolving us.

Dark Vision is a band which has like so many survived numerous line-up changes, how has that impacted on the band generally and do you think and feel  certainly for Dark Vision, that this inevitable process actually benefits bands creatively for the main?

Following all these years we can say for sure that all these line-up changes firstly made us stronger and secondly helped the band to evolve as it is today. Of course this doesn’t mean that if a band having a standard line-up for years will not evolve, but in our case helped a lot. The only think that we can say was against us in every chance, is the time and the preparation until the band became ready to act again.

year for your fifteen year anniversary. How has it been received so far and has this new unleashing from the independent US label brought a deserved energy and awareness to the EP?

Thanks for your good words! Bluntface Records definitely played a very important role in this release. From the very beginning we realized that with Otto from Bluntface Records we can work very smoothly and creatively together. We choose to release “Ingrowth” in vinyl. A part of the 15 years anniversary, it was a dream since the beginning of the band. We strongly believe that vinyl is more complete and at the same time nostalgic than the nowadays cd. The press worldwide hugged this release since the very beginning and we received very flattering words, we are thanking all of you for your support up to now.

How would you say the new release has evolved from and offers predominantly different to previous album Bestial Remedy?

We worked different this time. From creating the songs to the recording process everything was different. We worked at the recording sessions with more live feeling, which means that we didn’t use this time metronome, but we played all together in order to be closer to this live feeling.

Definitely! “Bestial Remedy” was the begging of a new era for the band and after all these years we can assure you that “Ingrowth” is a big step beyond for us, not only on the composing side but as an experience in the recording sessions.  This time with “Ingrowth” we focused more in the emotional, although our technical skills became better with results on this album.  The songs are approaching better death/black forms and all this under a “rock’n’roll” attitude.

There is a great melodic groove and breath to Ingrowth and its blackened death metal stance. Has this aspect naturally emerged or was something you wanted to intentionally explore?

Most of the things that we are doing are coming out naturally … after “Bestial Remedy” it was natural to continue and evolve this style under our way.

How are songs written within the band and what is more often than not the initial spark to an idea and song?

Composition process usually can be with 2 ways, sometimes our guitar player Mark is writing the song and presenting to the rest of the band in our rehearsals, and another way is to start in the studio working all together on an idea.

What are the strongest influences upon your writing musically and lyrically?

Many influences from daily matters up to religion (from a historical point of view), other times songs can describe personal situations or even our darkest thoughts…

Did you have set ideas and vision for songs before recording the EP in the studio or did they change and grow their own different character whilst bringing Ingrowth to life?

Most of the ideas in “Ingrowth” album were conceived in the preproduction. When the recording process started, we preferred to stay more close to technical matters (microphones set up, Amplifiers, etc), of course, in general if any last minute ideas arise and are worthwhile we are willing to try it. 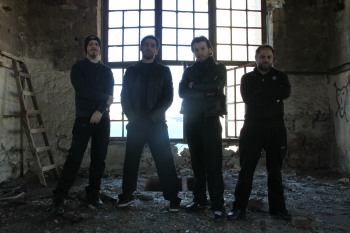 Ingrowth investigates, as your previous releases, the deepest and richest of shadows, is there an underlying theme to the EP?

We were just felt free to do things without second thought. The result is what you are now hearing and we are proud for that.

Is there a particular moment on Ingrowth which leaves the proudest feeling inside and alternatively is there something on the release which you are now inspired to explore further in future songs?

Yes, definitely the rock n roll element affected us regarding our music and emotionally at the same time.

On a recent episode of The Bone Orchard podcast I featured your track Garden of Nuclear Mushrooms. Can you give some back ground to the track?

Thank you for this! Garden … is a song that refers to the Apocalypse from our point of view …

Across the years you have shared stages with the likes of Mayhem, Satyricon, Sodom, Rotting Christ, and Septic Flesh to name a small few, what have been the biggest moment live and any artists you would sell a kidney to play with? 😉

There have been quite a few very impressive metal and rock bands bursting out of Greece in the past couple of years. Is the scene there as vibrant and impressive as it seems from the outside?

Yes! Over the last years lot of bands are doing a good job holding high the Greek flag of our metal scene…

What is next on the agenda for Dark Vision?

Next thing will be a live concert in Athens at 6th of April with other local bands…. Also writing news song at the same time…

Thanks for taking time to talk with us any final thoughts you wish to share?

Lastly which are the artists to have made the biggest impact on you as musicians?

Daily we hear a lot of things … we are always trying to expand our music  influences … of course musicians such as Frost from Satyricon, Inferno from Behemoth, Ihsahn from Emperor, Jon Nodtveidt, John Gallagher, we admire them and their influences guiding us , also lately Kvelertak from Norway is one of the bands that made something fresh in the scene …