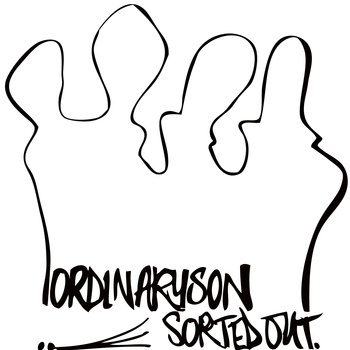 Sorted Out the title track from the 2012 album of Scottish band Ordinaryson is their new absorbing single, a release well equipped to continue and enhance their respected presence within UK indie music. The brainchild of singer and lead guitarist Ian S. Thompson, the Berwick-upon-Tweed based quartet has over the years drawn strong responses and acclaim with their indie folk sounds, the album and now single continuing to raise their potency and profile higher with charm and craft.

Over the years the band has seen many changes in personnel but with the current line-up recruited in 2007, Ordinaryson has found a stature and depth which is continually evolving and engaging. Alongside Thompson the band consists of lead guitarist Nick Holmes, bass player Steve Walker, and drummer Callum Knox, a four piece which coaxes mellow and melodic caresses out of hiding into imaginative and persuasive pieces of creative pleasure.

The single instantly cups the ear with inviting guitar strokes and a vibrant bass stepping between melodic kisses. It easily welcomes the listener into its vibrant yet gentle emotive heart with the vocals of Hunter a beckoning expressive lure to compliment and make the perfect vehicle for the lyrical hug. Merging folk with pop for a short breath barely over two minutes, the song is a brief glow of enticing sounds and tempting elegance which do not offer any intention of inventing the next wheel but just use an existing patent with thoughtful craft and embracing warmth for a pleasing flavoursome slice of joy.

It also declares it is time to investigate their album.