Man Without Machines: The Kreuzberg Press 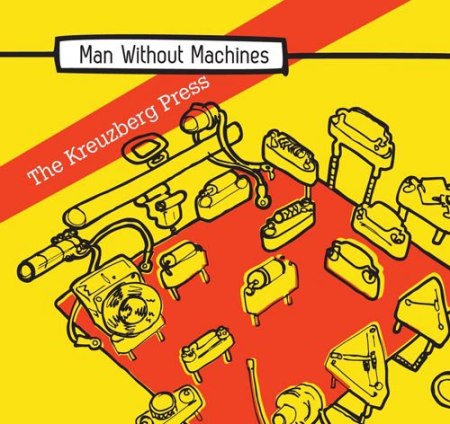 With a heavy influence from the synth pop and post punk of the eighties, Scottish band Man Without Machines has an electro sound which though an warm vibrant kiss from today is one which Mute Records would have devoured three decades back. Debut album The Kreuzberg Press blooms all its seeds into a pleasing and engaging package which fluctuates from consistently enterprising and satisfying to openly thrilling, an infectious encounter which pulsates with imagination and electronic dazzling.

From Dundee, Man Without Machines is the brain child of Adam Lockhart who upon the album conjures every aspect of its intriguing presence from songwriting and playing to production, with only additional help from Andrew Mitchell on bass and bass synth on certain tracks, whilst live the band is a five piece with a line-up completed alongside Lockhart by Mitchell, Val Campbell (Keys), Michael Benbow (drums), and Steve McCullough (guitar/synths). Influenced by the previously mentioned eighties sound and European politics, the album title referring to Kreuzberg in Berlin notable for its radical and counter-cultural movements in arts and music, the band has been capturing attention from fans and media through singles like Something’s Happening Here, a release given strong attention from the likes of BBC’s 6Music and BBC Scotland something the album surely will strengthen to a wider degree.

Released via Man Vs Man Records, The Kreuzberg Press takes no time in seizing ear and focus with opening cyber ticks and a coarse electro rub leading into an energetic wrap of welcoming guitar, warm vocals, and teasing keys. Even Still Even Though has a heat and smoothly flowing stance which combines repetition and subtle shifting tones for a compelling and catchy dance upon the senses. With essences initially of Fad Gadget evolving into a more OMD caress, the track is a strong and tempting start to the album which is instantly built upon by the following tracks.

Anyway unloads bulging pulses upon the ear before keys reveal their song with a sizzling touch alongside guitars staging their own display of magnetic lures ably aided by the throat contagious bass tones of Mitchell.  As the opener the song has easy access to an impressed reception with the vocals of Lockhart bringing extra fine elegance upon the hungrily energetic song. The song like the following Share The Love with its wonderful underlying niggling leaves a lingering taste brought through a varied stance within the overall electro pop wash of imagination to ensure many returns.

Through the likes of Sound Of Your Lies with an intro which loudly whispers Visage, the shimmering glow of Peterloo, and Falling Star, the release paints colourful pictures musically and lyrically which without finding earlier heights still entrances and ignites the senses for a continuing compelling experience. The latter of the trio offers washes of pre-disappointing pop era Human League with a blush of latter day Ultravox to wrap the listener in a quizzing emotive hug, its persuasion eventually staking its claim on the passions.

First single form the album, Something’s Happening Here is a delicious stroll through the ear with a Numanesque flavouring to its contagious swarm of mellow rhythmic agitation and seductive melodies driven by an excitable but held in check energy. It is undoubtedly one of the highlights of the album and it is obvious with its irresistible beckoning why it has lit the fires of so many. Scorelines is an equally tasty treat with an equal depth of allurement, its sterner guitar taunting and spellbinding synth melodies an electro polka of invention and exceptional temptation.

The heavier muscular It’s Closer and the closing rousing saunter of In Salt helps bring The Kreuzberg Press to a fine close with very agreeable accomplished invention. As well as the mentioned references inspired by songs at certain points there is also an overall feel of the smaller indie bands like Radio 5 and Music For Pleasure, bands which despite imaginative sounds departed as silently as they arrived and stayed during the eighties. With Man Without Machines it is hard to expect, on the evidence of their album, that they will see the same underwhelming fate.