Home › Music › The Vox Dolomites: Down For Three / Joan & Frank

The Vox Dolomites: Down For Three / Joan & Frank 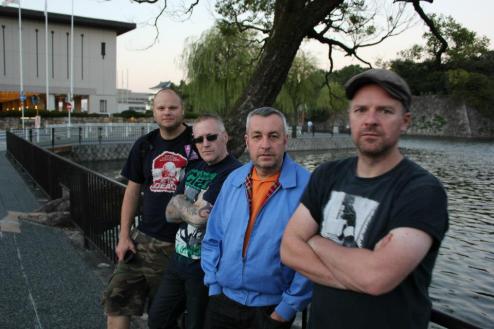 2013 is primed to be a big year for UK punksters The Vox Dolomites as one of the best and musically resourceful bands in British underground rock n roll release their debut album and a film of the Japanese tour they undertook in the closing weeks of last year. Before both of those forthcoming treats though the band has today put up two teasing tracks as a free download on their Bandcamp profile, two more songs ensuring their album will be an irresistible temptation upon its appearance.

The Stockport quartet of guitarists/vocalists Ant Walsh and Will Farley, bassist/vocals Chris O’Donnell, and drummer Simon Dunnington, have placed the songs Down For Three and Joan & Frank as their newest enticements to their accomplished and thrilling sounds. The members are forever mentioned as ex-members of One Man Stand, The Leif Ericsson and Spiteful Way, and we are no different, but now truly they stand as an immense entity as The Vox Dolomites, one with a character, distinction, and presence which overrides all history. Their sound is an uncompromising riot of directness and energy with songs either driven by a punk attitude or a ska swagger, occasionally though whisper it in their presence, both at the same time. Previous releases in their debut demo EP and the Japanese Tour EP left fans and media keen with their acclaim and ardour whilst live performances around the UK and 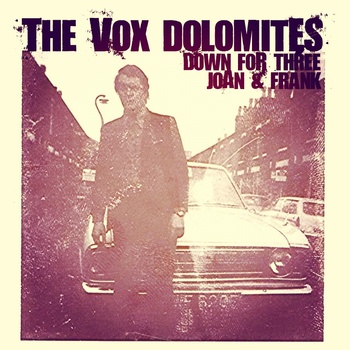 as mentioned in places like Japan, has earned the band the recognition of being one of the most thrilling and hardworking live bands around.

Down For Three immediately grips the ears and thoughts and leads them with eager hands on an energetic stomp. A deep alluring bassline from O’Donnell strolls through the centre of the song whilst the guitars of Walsh and Farley tease, stroke, and reward with precise anthemic riffs and passion igniting craft. Though not exactly a pop punk song, bands from that field could learn so much from The Vox Dolomites, their hooks and melodic infection a pure form of pop latched on to a vibrant and compulsive flame of honest rock n roll. With the added lingering kiss of the keys and great raw vocal harmonies, the song leaves a full and by its end impatient lust for the new album, oh how this band torments.

Second song Joan & Frank is a reworking of a track from the Japanese Tour EP. On the former release the song was an impacting ska joy with a mischief and melodic boast as irresistible as its inventive intent. Here the track has been given a punk make-over and emerges as a completely different presence which equals its earlier guise so that it is impossible to have a preference.  The stark and disturbing tale has a different stance in many ways due to the new approach but neither loses or gains power or greater relevance compared to the earlier song down to the quality of both. If the new version loses out to the first it is only in it is over so quickly, but that is what repetition is for, press and go again and again…

As mentioned with album and film coming, both we will cover here upon their releases, The Vox Dolomites should find a deserved expanse of recognition and even greater success, though the band only cares about giving the best passionate sounds and they have done that with each release to date, something you cannot see ever changing.