Barnyard Stompers: The Way-Gone, Wild and Rockin’ Sounds of … 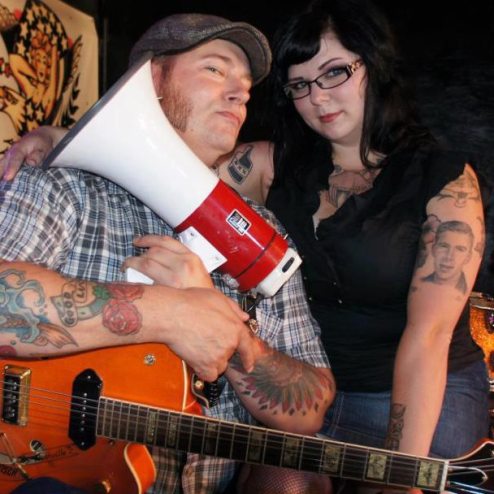 We have always had a tendency here, more a mission to be honest, to stay away from barn dances but that resistance could be seriously challenged if such events offered up the same riveting heart igniting sounds which make the Barnyard Stompers album, The Way-Gone, Wild and Rockin’ Sounds of … such a magnificent dance of devilment and fun. The release is a storm of diverse and insatiably mischievous songs which leave no rockabilly, cowpunk, and country blues stone unturned and equally ensure there is no passion or form of musical seduction untouched.

Barnyard Stompers consists of Casey Miller (guitar, vocals, kazoo) and Megan Go-Go Wise (percussion and backing vocals), two musicians who over the years have brought invigorating sounds in such bands as The Hillbilly Hellcats, The Bop Kings, Vibes on Velvet, The Kozmik Kowboyz, and Buckwild. In their new venture of around a year old, the pair fuses a mix of outlaw country, Texas stomp, blues, and rockabilly into their own distinct romp of irresistibility, self-tagged as backwoods twang. Since forming the band has played in excess of one hundred shows and performed before audiences within over fourteen states as well as releasing this riotous treat, so obviously they are a duo that is unrelenting in their work ethic and desire to thrill their fans, something the album does with dirty ease.

The album instantly brawls with the senses and heart through the opening intro Let’s Go Stompers, a short call to arms for 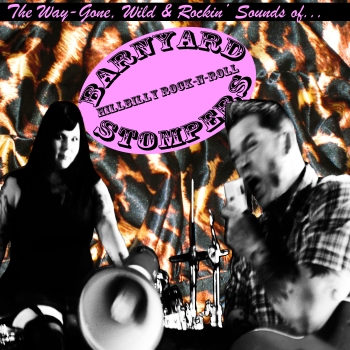 passions and feet through a raw and unbridled energy. From its raucous challenge the following Devil On My Shoulder lays a smouldering bluesy arm around the shoulders and serenades the ear with guitar mystique before steeping into an invigorating rockabilly stomp of firm beats, eager guitar, and inviting vocals veined with sonic flames which shimmer in the heat of the song. Across its stroll the song darkens its shadows with vocal effects and a sinister glaze to its compelling charge. It is a mighty full start to the album as it holds court over the passions steps forward as one of the major highlights, of which there are many, upon the release,.

Bad Tattoo offers up a character drenched narrative wrapped in a Waylon Jennings/The Reverend Horton Heat like glaze to further the set in satisfaction but is soon overwhelmed by the delicious blues croon of Love Long Gone, a song which plays like the love child of Elvis track That’s All Right and Say Mama from Gene Vincent. It has a familiarity about it which only endears and is brought with a craft and passion which leaves the listener mutually involved. Across the album many artists and flavours are provoked thought wise as with next up If You Want Me, a Buddy Holly/Carl Perkins spiced gem, though none settle into a recognisable stance due to the invention and devilry of the band and the songwriting.

Consisting of seventeen prime slices of varied temptation the album is a bumper crop of pleasure from start to finish which arguably in a release of this size is unexpected but wholly welcomed. Other notable moments of extended satisfaction comes in the more eclectic songs such as the version of traditional Irish song, Whiskey In The Jar, made most notable from the Thin Lizzy take on it. As with a later song on the album, Danny Boy Stomp, the Denver pair delivers the tracks with a caustic allure which is best described as Dropkick Murphys meets The Pogues, and a gravelly treat it is.

Songs such as the high octane dusty road cruiser Got Me A Trailer and the excellent garage rockabilly horror Nazi Zombies spark further riots of lustful passion for their unpolished instinctive rock n roll, whilst ’59 Black Cadillac is simply the highway to tarmac ardour with its smoking riffs and rumble strip rhythms. Other personal favourite moments where the album finds additional areas of pleasure to molest come with what can only be called mariachi ska in the song Rudeboy On The Highway, where the kazoo of Miller is impish upon the quite sizzling vaunt, and the Mexican punk fiesta El Carretero, not forgetting also the equally punk coated Question.

Every second and note of The Way-Gone, Wild and Rockin’ Sounds of … is the instigator to a hunger for much more from release and band, something which will be answered when the band release their follow-up album later this year. It is a stomp with no demands but to have fun, something which is as mentioned before is criminally easy.