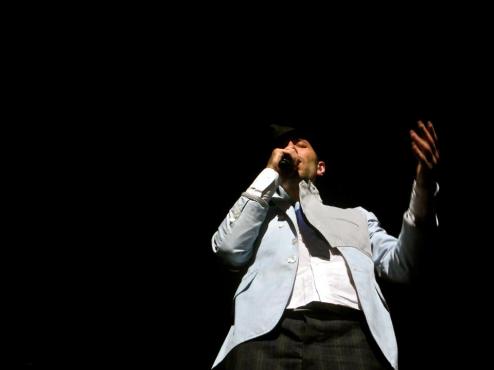 The opportunity to review the new single from British singer-songwriter Charlie Winston came up recently, a track which is easily one of the freshest dazzles of elevated pop to come along recently, but such its impressive heart and sound the urge to check out instead the recent album it came from burned brighter and what a rewarding decision it was. Running Still is exceptional, an eclectic feast of sounds and passion which ignites the heart.

France based Winston took to music at an early age, learning the drums at age eight, moving to the piano at ten, and within two years was writing his own songs. Growing up in a Suffolk hotel, which had a constant tide of itinerant artists, orchestras, actors, and thespians, added to his love and understanding of the performing arts so really it is no surprise his heart fuelled accomplished and imaginative creativity can openly be seen on his album. At seventeen he relocated to London to join brother, Tom Baxter, whilst studying music at Brunel. The next three years saw the pair playing in their band Baxter, with Winston on bass, and finding him writing and playing music for short films, dance productions, and TV adverts as well as producing and recording records with various artists. He continued to sing or play with many different bands on either bass, piano or percussion, whilst for the first time exploring the guitar.

In 2003 whilst recording bass on his brother’s album at Real World Studios, Winston was introduced to Peter Gabriel. Friends with his daughter, Winston eventfully decided to introduce his new EP to her father which led him to being signed to Real World Records, the label of Gabriel, for debut album Make Way, as well as supporting the man on his 2007 European tour. Moving to France next, Winston caught the attention of record label Atmosphériques, and through them linked up with to Mark Plati (David Bowie, The Cure, Louise Attaque) who produced his acclaimed second album Hobo. Released in 2009, the album topped the French charts and drew intense attention and responses in France and adjacent European areas though still back home he was and arguably still is an unknown, well until Running Free, via Real World Records, touches on the nation one suspects. 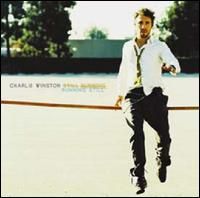 saunters into view. With shimmering sonics and a folk swagger, the song leads the ear and emotions into a mesmeric dance of heated brass, tingling keys, and excitable melodic sultriness. It is a compelling and glorious beginning which instantly raises the anticipation of what is to follow.

Immediately the flirty Speak to Me takes over, a mesh of big pulsating rhythmic seduction and semi-rapped vocals skirt the senses before engaging them in an enthralling unexpected big boned stomp. The track instantly reminds of Gabriel to be honest with additional elements of Talking Heads and though arguably it is an easy unchallenging composition for the listener it is nothing less than incitingly absorbing.

The previously mentioned single, Where Can I Buy Happiness?, ignites a furnace of pleasure and passion, its smouldering heat and sexiness a lure of the richest potency and fired elegance. It has a familiarity about it which is hard to pin point and certainly only adds to its triumph whilst its soulful plea connects with an inner understanding all can relate to. The quizzical bassline is exceptional and strolling within the glaze of emotive keys and again fine vocals adds to the compelling breath of a quite stunning song.

Already the diversity of the album is loud and continues throughout each subsequent track. The Great Conversation is a wonderful encounter of the dramatic, its weave of nostalgia and modern sensational. The song is a quirky English stroll through European classical intrigue complete with whispers of steampunk and totally delicious. The piano driven ballad She Went Quietly without sparking the passions of previous songs is a thoughtful evocative caress whilst Unlike Me is another tender amble across thoughts with its padding of rhythmic feet and mournful yet smiling strings, guitars, and harmonies.

The balmy soul of Until You’re Satisfied lifts the passions again to previous elevations, though they never ever dip into anything less than excitable at any point, before the southern blues soaked steamy encounter Wild Ones trips the light fantastic over the senses with steamy melodics and insatiable mischief. It is another major highlight which makes the perfect invitation and companion to another piano ballad in Making Yourself so Lonely, a song with a big breath and grander emotion.

Rockin’ in the Suburbs with its breathless excitement ,which transfers to and erupts within the listener, begins the closing straight for the album, the infectious and agitated rock n roll within its walls undemanding and generous with its rewards. Completed by the pop romp of Summertime Here All Year, a song with a touch of Julian Cope/Black about it, and a final emotive hug from Lift Me Gently, the magnificent Running Still is a lingering and continually returning treat which swirls around thoughts and memories long after its final kiss. If after its release Charlie Winston is still a mystery to the UK even the world at large, than something is seriously wrong.