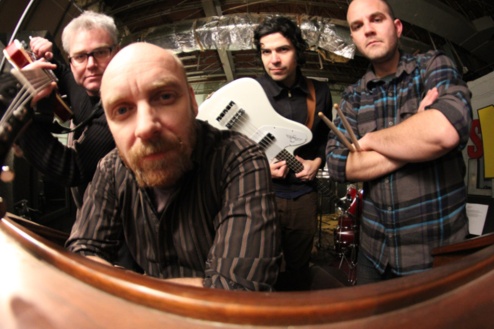 Listening to the self-titled debut album from Deathfix is like watching a fire, the shimmering breath it engages with a warm mesmeric touch to the senses and the vibrant melodic flames it strokes thoughts with a seductive irresistible provocative dance. Released on Dischord Records, a label renowned for its quality punk and hardcore releases, it is instantly an unexpected surprise, its breath-taking blend of rock pop, shoegaze, psych-pop, and psychedelia an unanticipated magnetic wash of sonic beauty.

Deathfix is the coming together of founding member and drummer of Fugazi and Rites of Spring, Brendan Canty (guitar, lead vocals) and singer/songwriter/producer Rich Morel (keyboards, lead vocals), the pair starting the project in 2009 having toured together in Bob Mould’s band. Spending two years writing songs the duo brought in Devin Ocampo (drums, backing vocals), a founding member of Faraquet and Medications, and Mark Cisneros (bass), a multi-instrumentalist who is currently playing drums in Medications, guitar and Saxophone in Chain and the Gang, and drums in Shortstack, their addition bringing further ideas and avenues which enhanced the music already imagined. Recorded at Brendan Canty’s warehouse studio space in Washington, D.C, the album is a hypnotic tease and kiss upon senses and thoughts, an elevated heat to immerse within and be inspired by the tempting sunrise and bewitching sunset it offers.

The release opens with Better Than Bad, its sizzling chords the first beckoning before a tide of delicious melodies and inviting

slightly acidic sonics play upon the ear. The union of vocals from Canty and Morel, each providing seamlessly fitting distinct elegances and lures, is a masterful coaxing as is the refreshing and invigorating summer of guitars and harmonies. The sixties voice of the song is a mischievous plaything for the seventies psychedelic stroking and both wrapped in the charm of progressive pop makes for a compelling and fascinating venture.

The following Low Lying Dreams brings a sinewy gait and sturdy atmosphere behind the rays of vocal and melodic sunshine which cascades down upon the ear. It has a more muscular intent than the opener but just as rich an entrancing weave and persuasive swagger to leave again the listener licking their lips in satisfaction and pleasure. From its on-going heated captivation the track opens up darker shadows to stalk the ear and gently stomp around the senses. The wonderfully grouchy bass of Cisneros resonates throughout, a mix of intimidation and sexy roguery which constantly abducts the attention, whilst the guitars sizzle with a scintillating grace and sonic finesse. The keys add further temptations to the ear and as the song brews up into a bedlamic suggestion the fires are lit musically and emotionally.

From the evocative Hospital, an absorbing glow of a song which offers its own lyrical darkness to push boundaries, the album moves to the wonderful and slightly disturbed Dali’s House, the song stepping forward to take things to another avenue and level. The song is an enthralling maze of ideas and lyrical devilry which baffles as it intrigues, whilst perpetually thrilling and igniting the passions. A meandering disco sway with licks of funk and electro whispers, the song just consumes the heart. Lyrically is a travelogue of wishful thinking which namedrops constantly like a stalker and a teasing companion to the infectious and irresistible brewing of stewing melodic alchemy.

Playboy and Mind Control both continue the manipulation of the senses and passions, the first a full flush of majestic thick pop and the second a merger of psychedelic brilliance around a progressive melodic candle. Both songs spark a continued enticement which is impossible to deny though arguably they suffer slightly from following two such impressive songs.

The album ends on the senses addling Transmission, a mix of sinister ambience, glorious melodic combustion, and an aural slight-of-hand, the guitars laying a feast of riveting emotive and skilful embraces diverting attention from the mesh of other delights going on. This combines to make the epic track a continually giving treat with each encounter and the perfect way to close the album and sum up the band in one glorious shot.

Quite simply Deathfix, band and album, is sensational and a treat all should bring to their ears and hearts as soon as possible.

Like Loading...
‹ Crest Of Darkness: In The Presence Of Death
Dark corners and caustic intent: an interview with Varicella ›