Darktown Jubilee: The World, The Flesh & The Devil

The World, The Flesh & The Devil is one of those releases which refuse to die down after completing its musical persuasion before the ear. Though the debut album from UK indie band Darktown Jubilee does not particularly offer anything strikingly new or adventurous, its songs have the intriguing habit of popping up again in thoughts and memory long after departing the speakers. Whether a melody, hook, or particular rhythmic encounter from the album they sneak up on you and strongly invite a return to what is a rather decent release.

The Manchester based band consisting of David Boardman (songwriting, vocals, guitar), Stuart Day (bass), John Cosgrove (drums), Al Roberts (lead guitar), and Gary O’Brien (keyboards) formed in 2010 and have been on a sure ascent ever since. Their sound finds inspiration in the likes of Bruce Springsteen, The Doors, The Killers, and The Temper Trap, a wide flavouring which certainly spices up the robust and anthemic album. Produced by Boardman and long- time collaborator John Kettle, The World, The Flesh & The Devil involves the listener from first note to last with rampant rhythms and colossal hooks a continuing temptation alongside the flames of strong melodies. Released on their own Parade Recordings, the album as mentioned does not stride into uncharted territories at any point but certainly creates waves which offer the longer term seduction. It is also a release which takes time to makes its full persuasion, maybe only a few tracks immediately having an instant irresistible temptation, but it smoulders with each return to its presence convincing a little more.

The two singles from the album open up the release starting with the energetic Breakdown. The song is a feisty storm of guitar 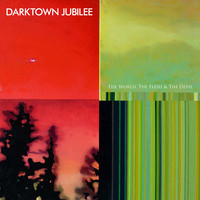 driven sound with a thumping heart and expressive breath vocally and musically. Guitars and bass stroke the ear initially whilst beats tumble across their gait, the rhythms increasing in force and frequency as Boardman begins the songs narrative with his impressive tones and delivery. There is an unmistakable Foo Fighters infectiousness and rampancy to the song coring the melodic teasing of keys and guitars and by its end the fiery encounter leaves one breathless and deeply satisfied.

The terrific start is matched by second single Stay, a less demanding but equally potent tempest of infectiousness. With a pulsating and mesmeric pulse from bass and synths, the track is a magnet to the senses and once in control sends layers of sultry keys, persuasive vocals, and stirring guitar strokes across the ear for the fullest creative suasion. Like the opener the anthemic depth of the song is towering but tempered by the emotive and shadowed lyrical presence. Both of the two songs find Darktown Jubilee at their best which could have left the album top heavy but the following tracks with varying success ensure the release is rounded and relatively consistent.

The likes of acoustic ballad The Great Escape and the big boned power ballad All I Want bring immediate diversity to the album after the adrenaline coursed start and though admittedly neither comes near to grasping the same impact as the first pair they are well crafted songs easily worthy of attention. Give Me a Sign, though a song which gains better appreciation with more companionship, slips below the already pleasing standard, though again here or at any point on the album you cannot criticise the songwriting or musicianship bringing the songs to life. It just does not ignite much more than appreciation due to its familiarity to plenty of other songs before and undoubtedly coming after it, something which cannot be said of Stop! Look Around. Starting on a sparkling cascade of sonic sprinkles the track bursts into a tall rampant gait with the occasional reserved restraint to create impressive crescendos of energy and sound. It is another catchy anthem puller which puts the album back on course.

The thrilling When You’re Wrong which starts as seemingly another emotive ballad before brewing and unleashing addiction fuelling rhythms and bighearted melodies without losing that initial intimate feeling and the intriguing Beautiful Night both continue the again enthralling lure of the album. The latter of the two is a weave of atmospheric grace and definite familiarity though without allowing a defined reason as to why emerge in thoughts, and a further refreshing variety to the album.

The remainder of the album settles into a strong if unremarkable stance though again songs like the Costelloesque Lost and  Something’s Gotta Give with depth and style ensure further strong pleasure.  The World, The Flesh & The Devil is an album which could be said does not ignite a fire in the belly or explode with dramatic moments but boy does it linger and return with ease whenever it wishes. If you are looking for accomplished and powerful big hearted tunes than Darktown Jubilee certainly fits the bill.